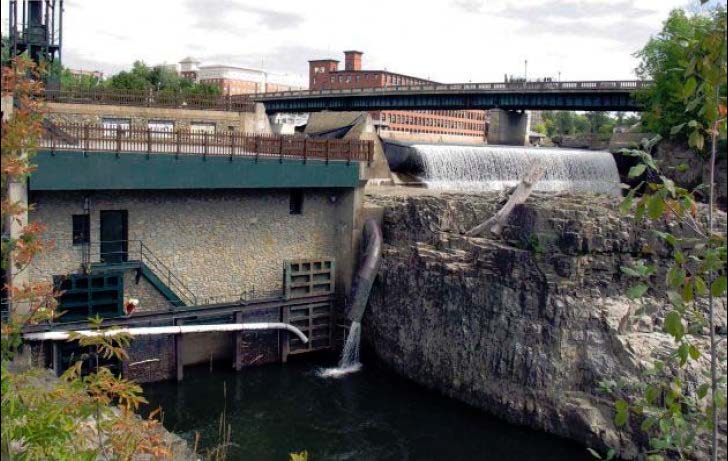 The project includes 200-foot-long, 35-foot-high reinforced concrete dam, situated immediately downstream of and abutting an historic timber crib dam built in 1876; a 100-foot-long, 8-foot-high bascule crest gate, installed at the top of the dam; a 70-foot-long concrete intake structure, which directs river flow into the powerhouse allowing for run-of-river operation; a 36-foot-long bascule gate between the intake structure and the right abutment of the main bascule crest gate; a reinforced concrete powerhouse consisting of three identical Kaplan turbines and generators with a combined capacity of 7.455 MW; a reinforced concrete fish trap facility; and a 45-foot-wide,125-foot-long tailrace channel excavated from ledge rock.

The project operates in an instantaneous run-of-river mode and impounds a 5.5-acre reservoir. The project provides a 168-cfs continuous minimum flow into the 265-foot-long bypass reach. The flow regime was developed with consultation from US Fish and Wildlife Service (USWFS) and VT Agency of Natural Resources (VANR) and aims to alleviate project impacts on fish and wildlife resources. The primary concern addressed by the flow regime is that of low dissolved oxygen levels which is mitigated by the reaeration associated with the minimum flow.

Waters within the project reach are designated as Class B, waters managed to maintain a level of quality that fully supports aquatic biota, wildlife, and aquatic habitat; aesthetics; public water supply; irrigation; swimming; and boating, fishing, and other recreational uses.The waters are impaired for E. coli contamination by sewage overflows from wastewater facilities. The project is not responsible for this impairment as confirmed by VT Department of Environmental Conservation (VDEC).

The Winooski River is a foundational fishery in Vermont, home to trout, bass, perch, panfish, walleye, landlocked salmon, and many more fish species. Upstream fish passage is facilitated by a fish lift which is operated from March 15 through May 1 and from October 1 through November 15. The collected fish are trucked upstream of the project and some further upstream above the Essex 19 project. This fish passage facility is a key component of the Lake Champlain Fish and Wildlife Cooperative’s salmonid restoration program as it allows salmon access to important spawning and nursery areas. Vermont Department of Fish and Wildlife (VDFW) confirms the passage facilities are efficiently and effectively supporting fishery objectives. Downstream fish passage is facilitated by two entry points at the dam as well as the spillway which spills during much of the spring migration period. Passage is operated in cooperation with USFWS and VDFW.

The project property consists of 50 acres. No lands of significant ecological value exist in the project area due to the urban/developed nature of the surrounding lands. The project license requires a plan for mitigating impacts of any land-clearing/disturbing activities 60 days prior to the start of such activities. The plan must include measures to minimize visual character incompatibility of all project structures with the surrounding landscape and adjacent structures.

PLUS-Standard: The project owner voluntarily entered into an agreement with VDFW to be a significant participant in the recovery efforts for the anemone multifidi species (cut leaved anemone). This includes annual monitoring and annual funding for state mitigation efforts.

The project itself is a cultural resource as a part of the Winooski Falls Mill District. A cultural resource management plan was developed for the project in consultation with the VT State Historic Preservation Officer (SHPO) and the Historic American Engineering Record of the US Department of Interior. The project owner has made efforts to educate the public about the cultural significance of the hydropower project and has engaged in cultural outreach with the Heritage Winooski Mill Museum. The project maintains a waterpower exhibit containing information and illustrations concerning the hydropower plant and fish elevator. Further, the project owner provides tours of the fish elevator and facilities to a local school group. The project owner must consult with the SHPO prior to any land-clearing or land-disturbing activities in the project area.

The project area is small and safety considerations preclude any recreation facilities in the project boundary. However, the project owner is providing funding to the City to construct a walkway in the area and previously constructed another walkway. Public access is provided free of charge and many non-project recreation opportunities exist near the project. These include a fishing area, several waterfront parks, and a network of hiking and nature trails.

January 8, 2020: The Low Impact Hydropower Institute has preliminarily approved Low Impact Recertification for the Winooski One/Chace Mill Hydroelectric Project, LIHI #16. There is one condition on the Certificate.

This decision is preliminary pending the 30-day appeal window. Only those who commented on the initial application during the 60-day comment period are eligible to file an appeal. Such appeal needs to include an explanation as to how the Project does not meet the LIHI criteria. Appeal requests can be submitted by email to comments@lowimpacthydro.org with “Winooski One/Chace Mill Hydroelectric Project” in the subject line, or by mail addressed to the Low Impact Hydropower Institute, 329 Massachusetts Ave, Suite 6, Lexington, MA 02420. All requests will be posted to the website.  The applicant will have an opportunity to respond and any response will also be posted. Requests must be received by 5 pm Eastern time on February 7, 2020.  The full application and reviewers report are available below.

If no appeal requests are received and the decision becomes final, the Certification term for the Project will be from July 29, 2019 to August 5, 2027.

October 21, 2019: The Low Impact Hydropower Institute has received a complete application for Low Impact Recertification of the Winooski One Hydroelectric Project.  LIHI is seeking public comment on this application.  Specifically, we are interested in knowing whether you think the Project meets the LIHI Low Impact Certification Criteria, as revised in the 2nd Edition Handbook.  Please review the program and criteria in LIHI’s revised Handbook and then review the Project’s application materials below.

Comments that are directly tied to specific LIHI criteria (flows, water quality, fish passage, etc.) will be most helpful, but all comments will be considered.  Comments may be submitted to the Institute by e-mail at comments@lowimpacthydro.org with “Winooski One Project Comments” in the subject line, or by mail addressed to the Low Impact Hydropower Institute, 329 Massachusetts Avenue, Suite 6, Lexington, MA 02420.  Comments must be received on or before 5 pm Eastern time on December 20, 2019 to be considered.  All comments will be posted to the web site and the applicant will have an opportunity to respond.  Any response will also be posted.

August 27, 2014: The LIHI Governing Board has determined that the Winooski One Project continues to meet the LIHI Certification Criteria, with an effective certification date of July 29, 2014. It is a five year term that will expire on July 29, 2019.

April 17, 2014: The Low Impact Hydropower Institute has received an application for recertification of the Winooski One Project. The current term is scheduled to expire on July 29, 2014. The 2014 application can be found in the “Files” section below.

November 19, 2009: LIHI’s Governing Board has determined that the Winooski One Hydroelectric Project continues to meet the Certification Criteria, and has been recertified for a five year term, effective July 29, 2009 and expiring July 29, 2014.

June 1, 2009: The Winooski One Partnership has filed an application to re-certify the Winooski One Hydroelectric Project, located in the cities of Burlington and Winooski in Chittenden County, Vermont. The original certification is set to expire July 29, 2009.