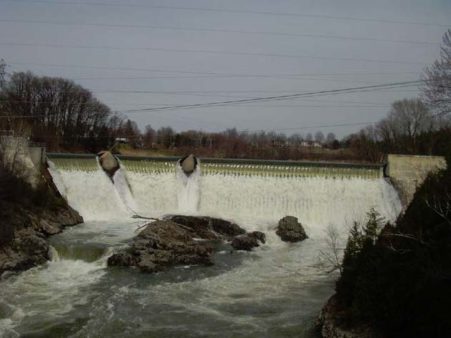 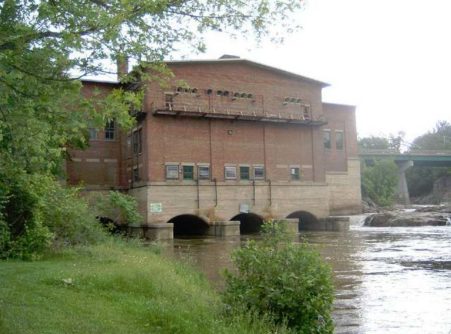 The Essex 19 Project is located on the mainstem of the Winooski River in the towns of Essex Junction and Williston, in Chittenden County, Vermont. The Winooski River flows to the northwest into Lake Champlain. The dam was built at the Hubble Falls between 1913 and 1917, however a dam has been at this location since the late 18th century. The original dam washed out in 1798, and another dam was built just upstream of the current location. Sometime after 1830 a timber dam was built just downstream of the current dam location. The project is located downstream of nine other hydroelectric projects including the Winooski No. 8 project (LIHI #77). Continuing downstream, there are two further hydropower projects, one of which is the Winooski One (Chace Mill) project (LIHI #16). The Essex 19 project is owned by Green Mountain Power (GMP), the first energy utility certified as a B-Corporation.

The dam is 495-feet-long with a 345-foot-long by 45-foot-high uncontrolled spillway section topped with 5-foot-high inflatable flashboards, and an 84-foot-long by 45-foot-high tip section topped with 6.5-foot-high inflatable flashboards. Two 3-foot-diameter steel/diversion penstocks and four 9-foot-diameter steel/diversion penstocks extend from the dam to the powerhouse. The powerhouse contains four horizontal Francis-type turbines as well as a minimum flow unit located in an old unused exciter unit bay, which is a double horizontal Francis-type turbine. Total installed capacity is 8.05 MW.

Waters within the project reach, both upstream and downstream of the project, are classified as impaired due to E. coli presence. However, VANR has determined that the impairment is not due to project operations. The downstream impairment is caused by the City of Burlington and City of Essex combined sewer overflows and the upstream impairment similarly is caused by the Montpelier Wastewater Treatment Facility overflows.

The Winooski River and the Lake Champlain Basin once hosted many anadromous fish species such as Atlantic sturgeon and Atlantic salmon. However, habitat destruction and overfishing effectively extirpated these species from the area around 150 years ago. Efforts have since been made to provide land-locked salmon passage from Lake Champlain into rivers for spawning. The project owner coordinates with the Winooski One fish lift project to aid the salmon population’s migration. The trap and truck operation costs are shared between facilities and the salmon are released upstream of the project. Temporary downstream passage measures were implemented in July 2018 with a temporary weir structure. Construction of more permanent structures were made in 2019 with consultation from US Fish and Wildlife Service (USFWS) and VANR. The owner incorporated recommendations from these agencies into the permanent downstream fish passage weir and shifted the downstream passage season as requested by USFWS. Trashracks with one-inch spacing mitigate the potential for entrainment.

The project lands consist of roughly 4.5 acres. While there are no lands of significant ecological value in the project area, a landscape management plan governs the vegetation management at the project. This plan ensures the blending of project works into the landscape as well as maintenance of vegetation around the powerhouse and bypassed reach.

Threatened or endangered species potentially within the project vicinity include the Northern Long-eared bat, Indiana Bat, Cobblestone Tiger Beetle, Boott's Rattlesnake Root, and Tri-colored Bat. Project flow operations do not interfere with any of the above species and there is a lack of suitable habitat within the project boundary for any of the listed species.

The project infrastructure, including the dam, intake structure, penstocks, and powerhouse, is eligible for listing on the National Register of Historic Places. These structures represent the pre-World War 1 formative years of the hydroelectric industry in Vermont. Annual reports of activities conducted under the project’s cultural resources management plan are filed with the Vermont Division for Historic Preservation and FERC.

Recreational resources at the project include a canoe portage, boat ramp, day use area, and interpretive signage. Public access is provided free of charge.

December 18, 2018: The decision to certify the Essex 19 Hydroelectric Project is final. No appeals were received during the appeal period which closed on December 16, 2018. The new certification term for the Project is from October 31, 2018 through October 30, 2023. The certificate includes the following conditions:

This decision is preliminary pending the 30-day appeal window. Only those who commented on the initial application during the 60-day comment period are eligible to file an appeal. Such appeal needs to include an explanation as to how the Project does not meet the LIHI criteria. Appeal requests can be submitted by email to comments@lowimpacthydro.org with “Essex 19 Hydroelectric Project” in the subject line, or by mail addressed to the Low Impact Hydropower Institute, 329 Massachusetts Ave, Suite 2, Lexington, MA 02420. All requests will be posted to the website.  The applicant will have an opportunity to respond and any response will also be posted. Requests must be received by 5 pm Eastern time on December 16, 2018.  The full application and reviewers report are available below.  If no appeal requests are received and the decision becomes final, the Certification term for the Essex 19 Project will be October 31, 2018 through October 30, 2023.

January 6, 2016: On December 30, 2016, the Low Impact Hydropower Institute (LIHI) received a complete application from Green Mountain Power Corporation for the Low Impact Certification of the Essex 19 Hydroelectric project, located at river mile 17.6 on the mainstem of the Winooski River in the townships of Essex Junction and Williston, Chittenden County, Vermont.