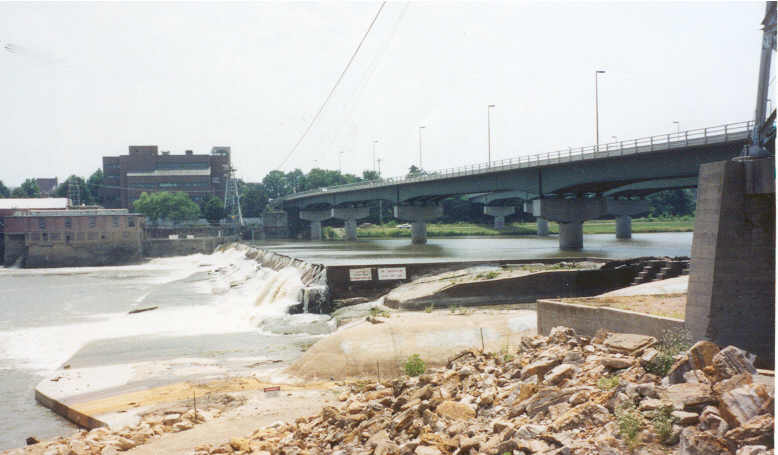 The Bowersock Mills Hydroelectric Project is located in Lawrence, Kansas on the Kansas River. The project is the only FERC licensed hydroelectric project in Kansas. The Bowersock Mills & Power Company (BMPC) was first established in 1874 as a milling operation on the Kansas River. At that time, Lawrence faced an energy crisis, as all the wood within a day’s wagon-haul had been harvested, driving the cost of energy significantly higher. Orlando Darling operated a grist mill on the north side of the Kansas River, and working with the City of Lawrence, agreed to build a dam across the Kansas River. Darling went broke in his efforts to make the dam hold, as did the subsequent company that tried to complete the dam. By that time, the Douglas County Flour Mills had been established on the south side of the river and was operating off the still-standing flume and southernmost masonry portion of the dam. J.D. Bowersock, the operator of the Douglas County Flour Mills, took over the project and successfully completed the dam. Bowersock continued to mill flour from that location and to provide mechanical energy for the City of Lawrence. Operations of the mill and mechanical energy generation continued until the flood of 1903 tore out the flour mill building and associated mechanical energy apparatus. Bowersock built a new powerhouse (South Powerhouse) between 1903 and 1905. The South Powerhouse was one of the earliest projects to generate hydroelectric energy in the United States and still generates power today.

The Bowersock dam is 655 feet long from the north side of the south powerhouse flume to the north powerhouse with an approximate height of 17.08 feet.

The southern 1/3 of the dam is a masonry block dam. The body of the dam is approximately 8 feet in width, and the downstream face of the dam in the timber crib portion has a stair-step structure, which ends in vertical sheet pile wall at various distances from the dam. The impoundment or “Millpond” is maintained at a steady level through five separate headgate structures. The South Obermeyer section consists of fifteen individual 10-foot Obermeyer flashboards and is located at the southern end of the dam. The center of the dam is topped by four separate rubber bladders, all of which operate independently from one another. The fifth control structure is the North Obermeyer Gate, which is a 20-foot gate located at the northern most end of the dam. The south powerhouse houses seven turbine/generator units and the north powerhouse houses four turbine generator units with a total installed capacity of 7 MW.

The project operates in run-of-river mode and impounds a 423-acre reservoir. Automated rubber bladders atop the dam as well as the Obermeyer gates operate to keep impoundment fluctuations within 6 inches. Flows are also monitored by a Supervisory Control and Data Acquisition system which indicates if the millpond is experiencing significant increases or decreases in flow rates. The flow regime was developed in consultation with the Kansas Department of Health and Environment (KDHE), USACE, and USFWS.

Waters within the project reach are designated as impaired for high concentrations of total suspended solids, total phosphorous, and E. coli. Via consultation with KDHE, the agency concluded that due to the project’s flow-through nature and long-standing presence on the river, the project is not introducing pollutants that cause or contribute to the impairments.

The Kansas River upstream of the project is host to a diverse fish community including ancient non-teleost species (lampreys, sturgeon, paddlefish, and gar), herring, cyprinids, suckers, catfish, sunfish, walleye, and drum. American eel is the only migratory species present in the project vicinity. However, resource agencies including USFWS and Kansas Department of Wildlife, Parks, and Tourism have not prescribed passage measures as the dam acts as a barrier to the upstream spread of Asian carp, an invasive species. The downstream reaches of the river include channel catfish, freshwater drum, common carp, largemouth bass, and white crappie.

The project lands consist of 664 acres. The project has little control of the surrounding lands that are increasing becoming more developed with urban parkland, riparian lands, and cultivated fields. No lands of significant ecological value exist in the project area.

Recreational resources at the project include a footpath and canoe portage trail, fishing deck, and information kiosk. Public access is provided free of charge.

2022: No material changes were identified.  The project reported rubber dam failure in 2021 that led to a sudden impoundment drawdown.  A subsequent drawdown to make repairs resulted in a planned impoundment deviation.  These deviations were properly reported to FERC and resource agencies, appropriate actions were taken, and there were no environmental effects. Therefore, LIHI does not consider this a significant compliance issue.

July 2, 2020:  The Low Impact Hydropower Institute (LIHI) has preliminarily approved the Bowersock Mills Project for a new 5-year term of Low Impact Certification. This decision is preliminary pending the 30-day appeal window. Only those who commented on the initial application during the 60-day comment period are eligible to file an appeal. Such appeal needs to include an explanation as to how the Project does not meet the LIHI criteria. Appeal requests can be submitted by email to comments@lowimpacthydro.org with “Bowersock Mills Project” in the subject line, or by mail addressed to the Low Impact Hydropower Institute, 329 Massachusetts Ave, Suite 6, Lexington, MA 02420. All requests will be posted to the website. The applicant will have an opportunity to respond and any response will also be posted. Requests must be received by 5 pm Eastern time on August 1, 2020. The full application and reviewer’s report are available below.

If no appeal requests are received and the decision becomes final, the Certification term for the Project will be July 9, 2019 through July 8, 2024.

LIHI is seeking public comment on this application. Comments that are directly tied to specific LIHI criteria (flows, water quality, fish passage, etc.) will be most helpful, but all comments will be considered.  Comments may be submitted to the Institute by e-mail at comments@lowimpacthydro.org with “Bowersock Mills Project Comments” in the subject line, or by mail addressed to the Low Impact Hydropower Institute, 329 Massachusetts Avenue, Suite 6, Lexington, MA 02420.  Comments must be received on or before 5 pm Eastern time on June 26, 2020 to be considered.  All comments will be posted to the web site and the applicant will have an opportunity to respond.  Any response will also be posted.

September 25, 2015: LIHI Executive Director Michael J. Sale, using authority delegated from the LIHI Governing Board, has determined that the Bowersock Hydroelectric Project (FERC No. 13526) continues to meet the LIHI Certification Criteria. The effective certification date for the Bowersock Project is July 9, 2014 for a five (5) year term, which will expire on July 9, 2019, with the following condition:

January 27, 2010: It has been determined by LIHI’s Governing Board that the Bowersock Project continues to meet the Certification Criteria. The project has been recertified for a five year term, effective July 9, 2009 and expiring July 9, 2014.