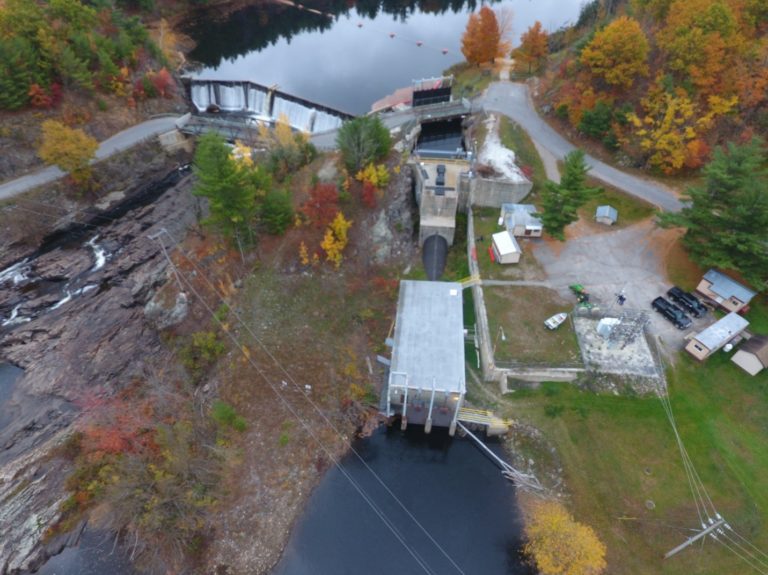 The Emeryville Project is located on the Oswegatchie River, in the Town of Fowler, New York. The 132 mile-long Oswegatchie river, a tributary to the St. Lawrence River, features many dams and hydroelectric facilities from its headwaters in the northwestern Adirondacks to its confluence with the St. Lawrence – the Emeryville project is the ninth upstream dam located approximately two miles downstream of the Hollow Dam (FERC #6972) and two miles upstream of the Fowler #7 Dam (FERC #6059). The Oswegatchie multi-development project (LIHI #161) and the Newton Falls Project (LIHI #32) are both located upstream of the project.

The history of the site dates back to the 1800s, when the waterpower was originally used to drive pulp grinders. In 1938, Rushmore Paper Mills, Inc. demolished the pulp mill and replaced it with a hydroelectric plant. Hampshire Paper Company (HPC) purchased the site from Rushmore Paper Mills in 1953. In 1987, HPC undertook a major renovation program by removing and replacing the powerhouse, turbine-generator equipment, switchyard, and portions of the intake. The project is currently owned by KE Emeryville, LLC.

The Project includes the dam, penstock, intake structure, bypass reach, and powerhouse containing one turbine. The dam is an existing 16.7-foot-high, 185-foot-long, concrete-capped timber and earth fill gravity dam with a 176-foot-long concrete spillway equipped with 2.4-foot-high flashboards and a 4-foot-wide, 0.5-foot-deep minimum flow weir. The intake structure consists of a 140-foot-long by 30-foot-wide reinforced concrete headgate flume, equipped with four headgates and trashracks with 5-inch clear bar spacing. The 60-foot-long, 14-foot-diameter penstock leads to the concrete powerhouse containing the horizontal axial flow turbine with an installed capacity of 3.481 MW. Flows are released to the tailrace and power generated is sent to the grid via the 80-foot-long, 23-kilovolt transmission line. The bypassed reach is 229 feet long and runs under Route 22, between Emeryville dam and downstream of the powerhouse.

The project operates in run-of-river mode and impounds a 35-acre reservoir. The project provides minimum flows of 20 cfs into the bypassed reach year-round. A headpond sensor monitors impoundment elevation and automatically adjusts turbine discharge to maintain impoundment elevation. The flow regime was developed in consultation with New York Department of Environmental Conservation (NYSDEC) and USFWS. This regime is intended to protect aquatic species and enhance habitat.

Waters within the project reach are designated as Class A. Designated uses, as prescribed by NYSDEC, include supply for drinking, culinary or food processing purposes, primary and secondary contact recreation, and fishing. Water quality testing found that bioindicators including dissolved oxygen and pH levels were unchanged upstream and downstream of the project.

Migratory fish species are not present in the Oswegatchie River at the project and upstream passage is also blocked by downstream dams. A bypass flume provides passage for resident fish into a plunge pool in the bypassed reach. Trashracks with 1-inch spacing are installed seasonally (March 15 - November 30) which exclude fish passing through the turbines. The project owner improved this fish passage by deepening and expanding the plunge pool as well as removing rocks that had the potential to damage riverine species in the bypass chute.

The project property consists of roughly 55 acres not including the impoundment. An invasive species monitoring plan has been implemented at the project to eradicate pale swallow wort populations. The project has installed informational signage, public disposal stations, and has trained staff in identification of the species as well as proper removal and disposal procedures.

The State Historic Preservation Office and U.S. Army Corps of Engineers have noted that project operations have no impact on any registered historic properties.

Recreational resources at the project include two boat ramps that provide access to the impoundment and tailrace, a canoe portage trail, and a picnic area.

October 10, 2018: The 30-day appeal window closed for the preliminary certification decision of the Emeryville Hydroelectric Project closed on October 6, 2018 with no appeals to the decision received. The decision is therefore final, and the Emeryville Hydroelectric Project is LIHI Certificate #144. The Certificate term is July 10, 2018 through July 9, 2023.

September 4, 2018:The Low Impact Hydropower Institute (LIHI) preliminarily approved Low Impact Certification for the Emeryville Hydroelectric Project.  This decision is preliminary pending the 30-day appeal window. Only those who commented in the initial application during the 60-day comment period are eligible to file an appeal. Such appeal needs to include an explanation as to how the projects do not meet the LIHI criteria. Appeal requests can be submitted by email to comments@lowimpacthydro.org with “Emeryville Hydroelectric Project” in the subject line, or by mail addressed to the Low Impact Hydropower Institute, 329 Massachusetts Ave, Suite 2, Lexington, MA 02420. All requests will be posted to the website and the applicant will have an opportunity to respond and any response will also be posted. Requests must be received by 5 pm Eastern time on October 6, 2018. The full application and reviewers report are available below.  If no appeal requests are received and the decision becomes final, the Certification term for the Emeryville Project will be July 10, 2018 through July 9, 2023.

February 20, 2018: The Low Impact Hydropower Institute (LIHI) has received a complete application from KEI (USA) Power Management Inc. for the Low Impact Certification of the Emeryville Hydroelectric Project (FERC No. 2850), owned by KE Emeryville LLC.  The project is located at river mile 70 on the Oswegatchie River in the town of Fowler, St. Lawrence County, New York and is the ninth hydroelectric development location upstream from the confluence with the St. Lawrence River. LIHI is seeking comment on the Emeryville application for certification. Comments that are directly tied to specific LIHI criteria (flows, water quality, fish passage, etc.) will be most helpful, but all comments will be considered.  Comments may be submitted to the Institute by e-mail at comments@lowimpacthydro.org with “Emeryville Comments” in the subject line, or by mail addressed to the Low Impact Hydropower Institute, 329 Massachusetts Avenue, Suite 2, Lexington, MA 02420.  Comments must be received at the Institute on or before 5 pm Eastern time on April 21, 2018 to be considered.  All comments will be posted to the web site and the applicant will have an opportunity to respond.  Any response will also be posted.