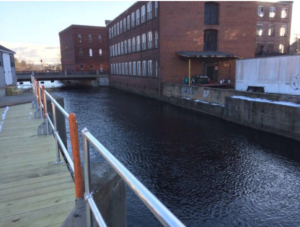 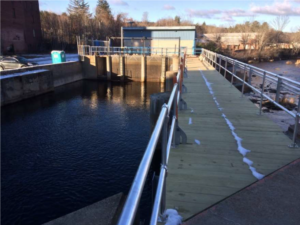 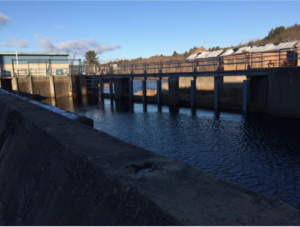 The New Home Dam Project is located on the Millers River in the center of the Town of Orange, Franklin County, Massachusetts. The first dam at the site was in built in 1790 and was used for a grist and sawmill. New Home Sewing Machine Company rebuilt the dam in 1877 and 1891. Chase Turbine moved to Orange in 1865 and occupied a small shop in the New Home Sewing Machine Company Works. The State designed and built the current dam beginning in 1939. The site was redeveloped for the current use in the 1980’s. The project is the most downstream of ten dams on the Millers River.
The project includes a 102.5-foot long, 9-foot-high dam with two bascule gates designed vintage 1939 (refurbished in 2016). There are two intake canals and powerhouses, one on the north bank of the river which contains a single turbine/generator unit and one on the south bank of the river which contains two turbine/generator units. The project has a total installed capacity of 0.455 MW.

The south riverbank is a structured bank using concrete retaining walls and riprap for protection of the shoreline. The structured system begins at the downstream face of the south powerhouse and continues to the westerly property line. The riprap material extends from the water’s edge to the south and ends at the property line, and is connected to the foundation of a building that had been razed by others prior to the project’s construction. The general arrangements of these features have been in place since the original dam was constructed in the 1790’s.

The project operates in a run-of-river mode and impounds a 106-acre reservoir. The project provides a minimum flow of 152 cfs, or inflow if less, and includes10 cfs flow to the bypass reach. This flow regime was developed by US Fish and Wildlife Service (USFWS), Massachusetts Department of Environmental Protection (MDEP) , and Massachusetts Division of Fisheries and Wildlife.

Waters within the project reach are designated as Water Quality Limited with the probable cause of impairment pertaining to municipal point source discharges and contaminated sediments traced to waste sites and dumps. MDEP confirmed that the project is not the cause of the water quality limitations and no issues are associated with the operation of the project.

The US Geological Survey (USGS) installed upstream eel passage at the project in 2008 which was operated by the Athol Bird and Nature Club. In 2011, USGS and USFWS operated an eel trap to no avail; the passage facilities were not effective. The project changed operations to decrease false attraction flows and added a concentrated attraction flow to improve the passage facility. Two 25 cfs bypasses (stoplog openings) are operated to provide downstream anadromous fish passage.

The project property consists of fewer than 2 acres of land. The project is located in an urban and industrial area and there are no lands of significant ecological value in the project area.

The Massachusetts Historical Commission reviewed the project for any impacts on cultural or historic resources and concluded that no impacts occur.

Recreational resources at the project include informal fishing access downstream of the project. Public access is not provided due to safety concerns near the project works. The project does coordinate with upstream dams that provide recreational flow releases for boating events and maintains a consistent reservoir surface elevation for the Town of Orange Boat House and a local outfitter.

2022: No material changes or compliance issues were identified. The project remains in compliance based on the annual review. The project reported an ownership change and transfer of the FERC exemption in February 2022.

July 17, 2017: On July 17, 2017, the Low Impact Hydropower Institute (LIHI) preliminarily approved Low Impact Certification for the New Home Dam project. The reviewer’s report is attached at the bottom of this page. This decision is preliminary pending the 30-day appeal window. Only those who commented in the initial application 60-day comment period are eligible to file an appeal. Such appeal needs to include an explanation as to how the project does not meet the LIHI criteria. Appeal requests can be submitted to comments@lowimpacthydro.org. Requests must be received by 5:00 pm EST August 17, 2017.

May 5, 2017: On April 28, 2017, the Low Impact Hydropower Institute (LIHI) received a complete application from the Mini-Watt Hydroelectric LLC for the Low Impact Certification of the New Home Dam project, FERC No. P-6096, located on the Millers River in the center of and predominantly commercial area of the Town of Orange, Franklin County, Massachustts, about 13.5 miles upstream of the confluence of the Millers and Connecticut Rivers.