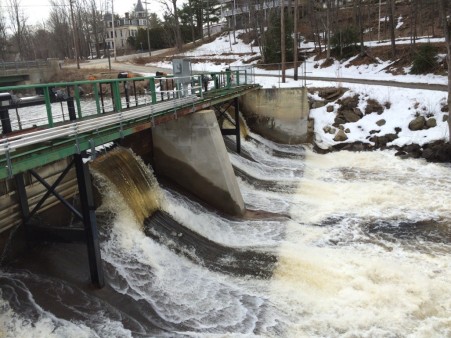 The Hunts Pond Dam Project is located on the Millers River in the town of Winchendon, Massachusetts, in the middle of a series of dams on the Millers River. There are three dams upstream and six dams downstream. Whitney Dam (a non-powered dam,) is approximately 0.5 miles upstream and Tannery Dam (P-8895) is approximately 0.3 miles downstream. The Millers River is over 50 miles long, fed from tributaries in Rindge and New Ipswich, New Hampshire, Lake Monomonac, an artificial lake that straddles the border between Rindge, New Hampshire, and Winchendon, Massachusetts, and numerous ponds feeding the mainstem on its way to confluence with the Connecticut River. The project commenced operation in 1985 but went offline in February 1993 due to the owner at the time falling into bankruptcy. The project was sold in 1996. After repairing the existing units and updating the control system, the new owner brought the project back online.

The project operates in a run-of-river mode and impounds a 120-acre reservoir. There is no bypassed reach. The elevation of Hunts Pond is controlled automatically by a Programmable Logic Controller (PLC) system, allowing the facility to operate in run-of-river mode and maintain the minimum flow requirements of 25 cfs (or inflow if less). The PLC enables the opening or closing of the intake wicket gates automatically, regulating flow to the two cross flow turbines.

Waters within the project reach are designated as Category 5 waters requiring a TMDL and listed as impaired upstream of the project due to chronic aquatic toxicity and temperature. The impairments are likely due to a wastewater treatment plant upstream and the project is unlikely to affect water quality of the river.

American eel are the only migratory species present in the Millers River and are not present in the project vicinity due to downstream barriers which prevent passage. Historically, Atlantic salmon, American shad, blueback herring and sea lamprey may have migrated to the project area, but the downstream barriers now preclude access for the species. Resident fish species in the Millers River include stocked rainbow trout, brown trout, brook trout, smallmouth bass, rock bass, bluegill, pumpkinseed, redbreast sunfish, fallfish, and common shiner.

The project lands are limited to the project facilities. It has a very small footprint in an urbanized area with no lands of ecological significance. Threatened or endangered species potentially present in the project vicinity include the Northern long-eared bat though the project area does not provide any suitable habitat for the species.

No cultural or historic resources are present, but the nearby Mason and Parker Manufacturing Company is included in the Massachusetts Inventory of Historic Assets. This includes some of the project facilities, but the powerhouse and new intake structure were built in 1985, not yet old enough to be eligible for listing on the National Register of Historic Places or the state inventory.

The project area is not safely accessible for recreational opportunities.

2021: There were no reported changes or compliance issues. The project remains in compliance based on the annual review.  For Condition 1, the project documented FERC’s approval of the compliance plan, thus satisfying the condition.

June 22, 2021: The Low Impact Hydropower Institute has issued a final decision on the recertification of the Hunts Pond Dam Hydroelectric Project. The preliminary decision was announced on May 18, 2021 starting the 30-day appeal window. That window closed on June 17, 2021 and no appeals were filed. Therefore, the decision to recertify the project is now final. The new term for the project is September 8, 2020 through September 7, 2025.

May 18, 2021: The Low Impact Hydropower Institute (LIHI) has preliminarily approved the Hunts Pond Dam Project (LIHI #125) for a new 5-year term of Low Impact Certification. This decision is preliminary pending the 30-day appeal window. Only those who commented on the initial application during the 60-day comment period are eligible to file an appeal. Such appeal needs to include an explanation as to how the Project does not meet the LIHI criteria. Appeal requests can be submitted by email to comments@lowimpacthydro.org with “Hunts Pond Dam Project” in the subject line, or by mail addressed to the Low Impact Hydropower Institute, 1167 Massachusetts Ave, Office 407, Arlington, MA 02476. All requests will be posted to the website. The applicant will have an opportunity to respond and any response will also be posted. Requests must be received by 5 pm Eastern time on June 17, 2021. The full application and reviewer’s report are available below. If no appeal requests are received and the decision becomes final, the Certification term for the Project will be February 11, 2021 through February 10, 2026.

February 23, 2021: The Low Impact Hydropower Institute (LIHI) has received a complete recertification application from Winchendon Hydroelectric, LLC for the Hunts Pond Dam Project. The complete application can be found below. LIHI is seeking comment on this application. Comments that are directly tied to specific LIHI criteria (flows, water quality, fish passage, etc.) will be most helpful, but all comments will be considered. Comments may be submitted to the Institute by e-mail at comments@lowimpacthydro.org with “Hunts Pond Dam Project Comments” in the subject line, or by mail addressed to the Low Impact Hydropower Institute, 1167 Massachusetts Avenue, Office 407, Arlington, MA 02476. Comments must be received at the Institute on or before 5 pm Eastern time on April 24, 2021 to be considered. All comments will be posted to the web site and the applicant will have an opportunity to respond. Any response will also be posted.

December 24, 2015 – LIHI Executive Director Michael J. Sale, using authority delegated from the LIHI Governing Board and a full review of the Application Reviewer’s report and all public comments and additional materials provided by the Applicant, has certified that the Hunts Pond Dam Hydroelectric Project (FERC No. P-8012) satisfies the LIHI Certification Criteria.  A Preliminary Decision was announced on November 25, 2015, and a 30-day appeal period was open through December 24, 2015. No requests for appeal were received. This Certification Decision includes one facility-specific condition, as follows:

The effective certification date for the Hunts Pond Dam Project is September 8, 2015 for a five (5) year term, which will expire on September 5, 2020.