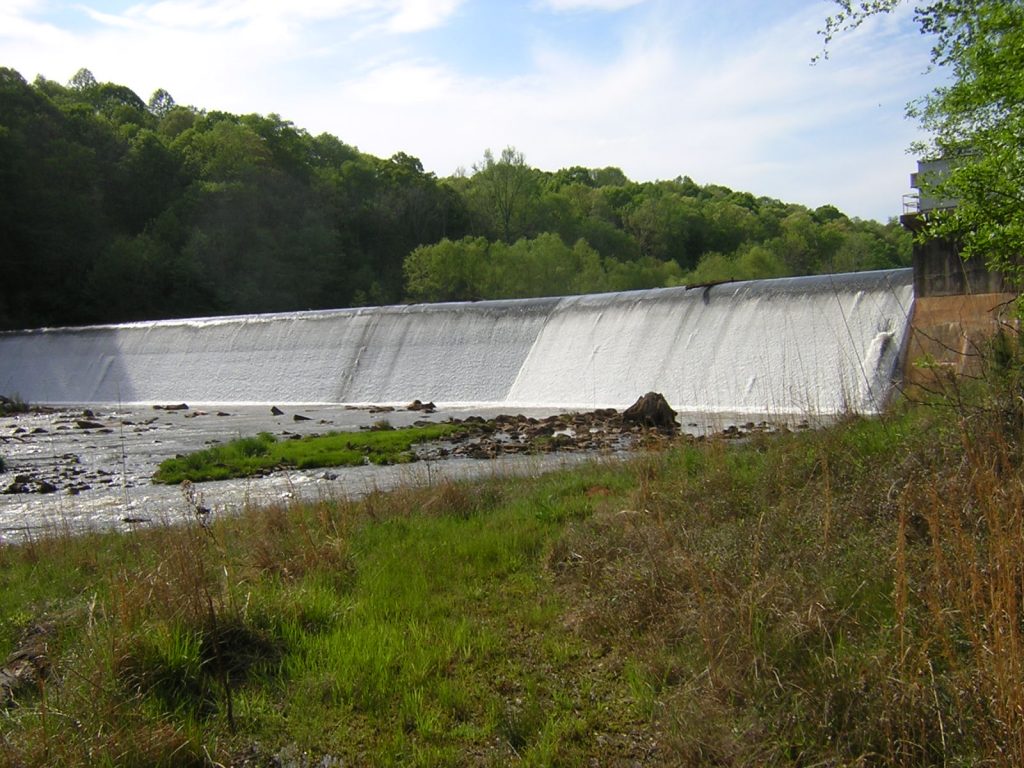 The Tallassee Shoals Project is located on the Middle Oconee River one-half mile downstream of GA Hwy 330 in Clarke and Jackson Counties, Georgia. The Tallassee Shoals dam was constructed between 1898 and 1902 and was operated by Athens Railway and Electric, then by the Georgia Power Company until 1962. After a dam breach in 1964, the project was restored by replacing the dam and powerhouse superstructure in 1985. It resumed operations by Oglethorpe Power in 1986. Ownership was transferred twice up until 2008. The project is the only dam on the Middle Oconee River and lies upstream of three hydroelectric projects on the Oconee River.

The project includes: a concrete gravity dam; a 1,400-foot-long headrace channel from the dam to the powerhouse; one 11-foot-diameter penstock; trashracks with clear spacing of 2 inches in front of the dam and 4 inches in front of the penstocks. There are two generating units, a 2.2 MW variable pitch Kaplan turbine fed by a 400-yard-long headrace and a 100 KW submersible fixed pitch Kaplan unit built within the dam. Both are operational but the 100 KW unit is rarely used due to its relative size and the manual labor required to clean its trash rake. The powerhouse discharges to a 750-foot-long tailrace.

The project operates in a run-of-river mode and impounds a 23-acre reservoir that creates a 2,100-foot bypass reach. The project provides a continuous minimum flow of 70 cfs into the bypass reach and a seasonal flow of 138 cfs in the month of May. The flow regime was developed in consultation with Georgia Department of Natural Resources and US Fish and Wildlife Service (USFWS) to support aquatic resources.

Waters within the project reach are designated as good quality but are impaired for fecal coliform bacteria contamination due to urban runoff and non-point-source pollution. Consultation with Georgia Department of Natural Resources confirms that project operations are not responsible for the impairment in this river section.

No diadromous fish are present in the project area due to downstream dams and natural barriers on the Oconee River. These barriers were formed during the Mesozoic Era as the Fall Line formed the shoreline of the Atlantic Ocean. As the ocean receded, it formed rapids and waterfalls that now block migratory fish passage. The Middle Oconee River supports roughly 40 species of resident fish, namely largemouth bass, spotted bass, black crappie, channel catfish, and sunfish varieties.

The project property consists of roughly 24 acres. The shoreline exhibits low potential for erosion or other forms of instability due to a high degree of vegetative cover as well as the presence of rock outcroppings that function as naturally occurring shoreline stabilization features. Land use around the project is generally rural residential, low-intensity urban, and forested land.

Threatened and endangered species potentially within project vicinity include Indian olive, mountain catchfly, pool sprite, black-spored quillwort, mat-forming quillwort, gray bat, and Altamaha shiner. None of the listed plant species are known to occur in the project property. The Altamaha shiner does occur in the project area, but the Nongame Conservation Section of Georgia Department of Natural Resources has confirmed that continued operation of the project will not impact the species. The other listed species have not been identified in the project area.

Cultural resources in the project property include the dam and powerhouse which are eligible for listing on the National Register of Historic Places. The dam and powerhouse facilities were built between 1898 and 1902 and originally used to provide electricity to the electric street railway and subsequently businesses and residents of Athens, GA. It represents the inception of electrical power usage in Athens, a resource of local historical significance.

Recreational resources at the project include fishing access, hiking trails, and feasibility plans for a potential canoe portage are under development. Public access is provide free of charge except within 200 feet of the project dam for safety reasons. The canoe portage plans are being undertaken by the project owner, American Whitewater, and the Upper Oconee Water Trail to provide better access for recreational boaters.

2022: No material changes or compliance issues were identified. The project remains in compliance based on the annual review. The project filed its final license application on 09/15/2021. FERC’s environmental analysis is pending additional information requested. For Condition 2, no agencies recommended fish passage in relicensing.

2021: There were no reported changes or compliance issues. The project remains in compliance based on the annual review. For Condition 1, the project filed its draft license application including study results.

August 13, 2019: The decision to recertify the Tallassee Shoals Hydroelectric Project is final. No appeals were received during the appeal period which closed on August 8, 2019. The new certification term for the Project is from April 23, 2019 through April 22, 2024.

This decision is preliminary pending the 30-day appeal window. Only those who commented on the initial application during the 60-day comment period are eligible to file an appeal. Such appeal needs to include an explanation as to how the Project does not meet the LIHI criteria. Appeal requests can be submitted by email to comments@lowimpacthydro.org with “Tallassee Shoals Hydroelectric Project” in the subject line, or by mail addressed to the Low Impact Hydropower Institute, 329 Massachusetts Ave, Suite 6, Lexington, MA 02420. All requests will be posted to the website.  The applicant will have an opportunity to respond and any response will also be posted. Requests must be received by 5 pm Eastern time on August 8, 2019.  The full application and reviewers report are available below.

If no appeal requests are received and the decision becomes final, the Certification term for the Project will be April 23, 2019 for a term of five (5) years, which will expire on April 22, 2024.

April 29, 2019: The Low Impact Hydropower Institute has received a complete application for Low Impact Recertification of the Tallassee Shoals Hydroelectric Project.  LIHI is seeking public comment on this application.  Specifically, we are interested in knowing whether you think the Project meets the LIHI Low Impact Certification Criteria, as revised in the 2nd Edition Handbook.  Please review the program and criteria in LIHI’s revised Handbook and then review the Project’s application materials below.

Comments that are directly tied to specific LIHI criteria (flows, water quality, fish passage, etc.) will be most helpful, but all comments will be considered.  Comments may be submitted to the Institute by e-mail at comments@lowimpacthydro.org with “Tallassee Shoals Project Comments” in the subject line, or by mail addressed to the Low Impact Hydropower Institute, 329 Massachusetts Avenue, Suite 6, Lexington, MA 02420.  Comments must be received on or before 5 pm Eastern time on June 28, 2019 to be considered.  All comments will be posted to the web site and the applicant will have an opportunity to respond.  Any response will also be posted.

May 30, 2014: LIHI received a comment letter from the U.S. Fish and Wildlife Service regarding the recertification of the Tallassee Shoals Hydroelectric Project. The letter is available to read in full in the “Files” section below.

April 3, 2014: The Low Impact Hydropower Institute has received an application for a third term of certification of the Tallassee Shoals Project. The current certificate is scheduled to expire on April 23, 2014, but LIHI is extending the term to June 30, 2014, to allow for a period of public comment on the application.

August 27, 2009: The Tallassee Shoals Hydroelectric Project has been certified as low impact for a second five year term, effective April 23, 2009 and expiring April 23, 2014.