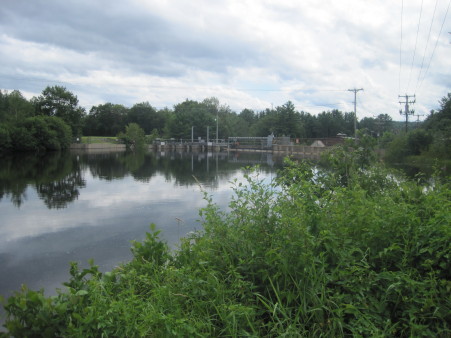 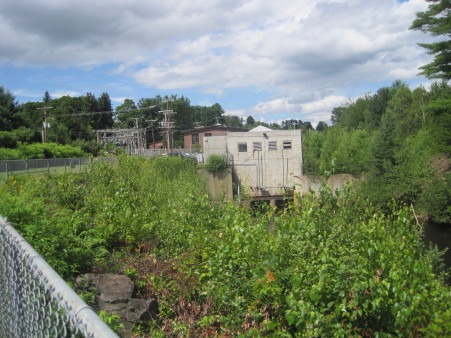 The Clement Dam Project is located on the Winnipesaukee River in the town of Tilton, Belknap County, in central New Hampshire. Owned by Clement Dam Hydroelectric, LLC, (a subsidiary of Eagle Creek Renewable Energy) the project is located roughly four miles downstream of the Lochmere Hydroelectric Project and roughly two miles upstream of the Stevens Mill Hydroelectric Project (LIHI #123). The project dam was originally constructed in the early 1900s as a hydroelectric site. The original structure was breached in 1943 and replaced by a concrete dam in 1982. The project resumed commercial operation in 1984. The Winnipesaukee River traditionally supported industrial activity in the towns that line its banks from Lake Winnipesaukee to its confluence with the Merrimack River.

Flows on the Winnipesaukee River are highly regulated by releases from the Lakeport Dam located on the outlet of Lake Winnipesaukee, which controls 45% of the watershed. Flows from the Lakeport Dam are directed by the State of New Hampshire to control water levels on the lake and balance recreational, environmental and commercial uses. After exiting the Lakeport Dam, the river enters Opechee Bay and travels through an industrial area in Laconia and ends at Winnisquam Lake, entering the Lochmere Dam at the outlet. The river then passes through Silver Lake before entering through the center of the towns of Tilton and Northfield, where the Clement project is located.

The project includes: The dam, approximately 120 feet long with a 16.5-foot-high concrete spillway section topped with 3-foot-high wooden flashboards and a gated sluiceway section that includes 5 gates (one waste gate, downward opening and 4 spillway gates, upward opening). The intake, located on river right (looking downstream), leads to a 12-foot-diameter steel penstock which extends approximately 325 feet from the intake to the powerhouse. The powerhouse, which is located on the right side of the bypass channel contains one horizontal Kaplan turbine-generator with an installed capacity of 2.4 MW and appurtenant facilities. The tailrace returns flow to the Winnipesaukee River approximately 600 feet downstream of the dam.

The project operates in run-of-river mode and impounds a 27,200-acre reservoir. The project provides a minimum flow of 235 cfs below the tailrace with 30 cfs of that flow into the bypass to protect aquatic resources in the reach. This regime was developed via recommendation from the USFWS and US Environmental Protection Agency. During downstream fish passage season (mid-August through mid-December), the bypass flow is increased to 50 cfs. The project coordinates reservoir drawdowns with the New Hampshire Department of Environmental Services (NHDES). Drawdowns are limited to 1 foot/hr and the typical refilling rate is passage of 70% inflow and retention of 30% inflow.

Downstream dams create a barrier for upstream passage. Historically, migratory fish including Atlantic salmon, American eel, alewife, sea lamprey, and blueback herring were abundant in the watershed. In 1847, the Essex dam was constructed on the Merrimack River in Massachusetts, blocking anadromous fish from accessing the upstream reaches of the river and its tributaries. Agencies reserve the right to prescribe upstream passage in the future at the Clement project. Adequate downstream fish passage for American eel and river herring populations is provided by passage flows released via the concrete sluiceway and waste gate that flow to a plunge pool. USFWS and New Hampshire Fish and Game, both of whom routinely visit the site during passage season, have confirmed adequate passage is allowed through these measures.

The project property occupied by non-reservoir facilities consists of roughly 5 acres. There are no critical habitats or lands of significant ecological value in the project area as most of the project vicinity is developed.

Threatened and endangered species potentially within the project property include Northern long-eared bat. While the northern long-eared bat has the potential to occur in the project vicinity, there is no critical habitat designated for the species. It is unlikely that the species is present in the limited project boundary due to the developed nature of the surrounding lands.

Recreational resources at the project include three fishing piers and a boat launch. The riverbanks immediately upstream of the project in Tilton are industrialized, while the area downstream is more scenic as the river courses from Clement to the Steven Mills (LIHI #123) and Franklin projects. The project owner granted the town permission to construct portions of the Riverfront Park located on project lands. The park offers fishing piers, a boat launch and bathrooms for recreational users.

Condition 1: In order to maintain compliance with the Upstream Fish Passage Criterion, the facility Owner shall report in its annual compliance statement to LIHI:

2021: There were no reported changes or compliance issues.  The project remains in compliance based on the annual review.  For Condition 1, the project reported on consultation with USFWS and a draft MOA under refinement.

2020: There were no reported changes or compliance issues.  The project remains in compliance based on the annual review.  For Condition 1, the project reported on consultation with USFWS and agreements to defer upstream eel passage until 2025, and to extend the current MOA to complete the required flow monitoring and fish passage plans.

February 6, 2020: The Low Impact Hydropower Institute has preliminarily approved Low Impact Recertification for the Clement Dam Hydroelectric Project, LIHI #117. This decision is preliminary pending the 30-day appeal window. Only those who commented on the initial application during the 60-day comment period are eligible to file an appeal. Such appeal needs to include an explanation as to how the Project does not meet the LIHI criteria. Appeal requests can be submitted by email to comments@lowimpacthydro.org with “Clement Dam Hydroelectric Project” in the subject line, or by mail addressed to the Low Impact Hydropower Institute, 329 Massachusetts Ave, Suite 6, Lexington, MA 02420. All requests will be posted to the website.  The applicant will have an opportunity to respond and any response will also be posted. Requests must be received by 5 pm Eastern time on March 7, 2020.  The full application and reviewers report are available below. If no appeal requests are received and the decision becomes final, the Certification term for the Project will be from December 31, 2019 to December 30, 2024.

November 27, 2019: The Low Impact Hydropower Institute has received a complete application for Low Impact Recertification of the Clement Dam Hydroelectric Project.  LIHI is seeking public comment on this application.  Specifically, we are interested in knowing whether you think the Project meets the LIHI Low Impact Certification Criteria, as revised in the 2nd Edition Handbook.  Please review the program and criteria in LIHI’s revised Handbook and then review the Project’s application materials below. Comments that are directly tied to specific LIHI criteria (flows, water quality, fish passage, etc.) will be most helpful, but all comments will be considered.  Comments may be submitted to the Institute by e-mail at comments@lowimpacthydro.org with “Clement Dam Project Comments” in the subject line, or by mail addressed to the Low Impact Hydropower Institute, 329 Massachusetts Avenue, Suite 6, Lexington, MA 02420.  Comments must be received on or before 5 pm Eastern time on January 26, 2020 to be considered.  All comments will be posted to the web site and the applicant will have an opportunity to respond.  Any response will also be posted.

May 11, 2015 – Executive Director Michael J. Sale, using authority delegated from the LIHI Governing Board and a full review of the Application Reviewer’s report and all public comments and additional materials provided by the Applicant, has determined that the Clement Dam Hydroelectric Project meets the LIHI Certification Criteria. The effective certification date for the Clement Dam Project is December 31, 2014 for a five (5) year term, which will expire on December 31, 2019, with the following conditions:

February 17, 2015 – The Low Impact Hydropower Institute (LIHI) received a timely and complete application on February 6, 2015 from Eagle Creek Renewable Energy LLC, for the Low Impact Certification of the Clement Dam Project, FERC P-2966, located on the Winnipesaukee River in the state of New Hampshire.