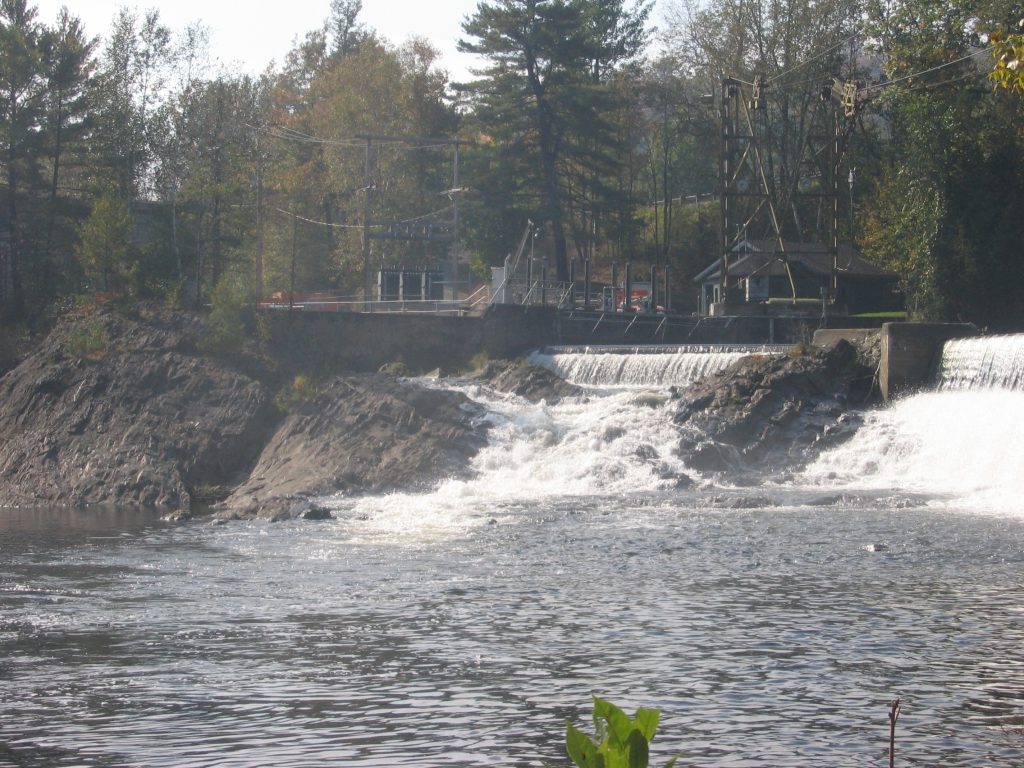 The Gage Project is located in northeastern Vermont near St. Johnsbury in Caledonia County on the Passumpsic River. It was built in 1919-1920 by the Twin State Gas & Electric Company. The dam was destroyed in the flood of 1927, although the powerhouse was largely undamaged. A concrete dam was constructed in 1929. The facility is significant because it is among the very few genuinely low head stations featuring an open channel and generating units in an open pit setting. The powerhouse is also among the limited number of such buildings constructed entirely of steel and concrete, without the brick facade typical of 1920s powerhouses. The remains of the first hydroelectric station in St. Johnsbury, reportedly built in 1898, are tied into the north abutment of the dam and support the cableway tower.

The project is the third most downstream dam on the Passumpsic River. Upstream projects include Pierce Mills (LIHI #92) and Arnold Falls (LIHI #93). The downstream projects are the Passumpsic River Project (LIHI #95) and East Barnet Project (FERC No. 3051), the first dam on the river. The river is 22.7 miles long and a tributary to the Connecticut River, entering just downstream of Comerford Dam (part of the Fifteen Mile Falls Project, LIHI #39). The project is owned by Green Mountain Power (GMP), the first energy utility certified as a B-Corporation.

The concrete gravity dam consists of three sections: a north section which is 176-feet-long with a maximum height of 13-feet, topped with 6-foot-high flashboards; a center section 30-feet-long; and a south section 43-feet-long by 18-feet-high with a 6-foot-wide sluice topped with 1-foot flashboards. The dam is equipped with a 51-foot-wide headgate structure with four headgates. The dam creates a bypassed reach approximately 950-feet-long.

The power canal is 90-feet-long by 44-feet-wide by 16-feet-deep and conveys flow to the powerhouse via an integral intake with an inclined trashrack. The powerhouse contains two vertical shaft turbines and generators with a combined capacity of 0.7 MW. The downstream fish passage facility consists of a sluiceway in the spillway adjacent to the canal headworks.

The project operates in a run-of-river mode and impounds a 15.2-acre reservoir. The project provides a minimum flow of 142 cfs from October 1 through May 31 and 82 cfs from June 1 through September 30. This flow regime was developed in consultation with the Vermont Agency of Natural Resources (VANR).

Waters within the project reach are designated as Class B and impaired for e. coli contamination. Class B waters are managed for high quality support of aquatic biota and wildlife, primary and secondary contact recreation, public water supply use, and agricultural uses. Consultation with VANR has confirmed that the project does not contribute to the river impairment as the source is the upstream St. Johnsbury wastewater treatment facility.

Downstream dams in the Passumpsic River and Connecticut River mainstem create a barrier to upstream fish passage at the project. While American eel populations were historically plentiful in the Connecticut River watershed, the presence of many dams on the river now prevent passage of the species. The downstream projects on the Passumpsic and Connecticut rivers block passage and US Fish and Wildlife Service has not requested upstream passage at those projects or at Gage. The project facilitates downstream passage via a sluiceway in the spillway adjacent to the canal headworks which leads to a 2-acre plunge pool. Passage is primarily utilized by resident trout species. Trashracks with one-inch spacing mitigate the potential for entrainment at the project.

The project lands consist of roughly 25-acres. No lands of significant ecological value exist in the project area as most of the project lands are mixed forest, shrubs, and some barren rocky areas. Erosion control measures have been implemented at the project via the installation of riprap protections along the slopes of the impoundment most susceptible to erosion.

Threatened or endangered species potentially present in the project vicinity include the Northern Long-eared Bat. Consultation with the VANR has confirmed that the project does not impact the listed species.

Cultural resources in the project area include the project infrastructure (dam, intake structure, generating units, powerhouse) which is eligible for listing on the National Register of Historic Places. These structures are representative of a period between 1882-1941 in which hydropower development in Vermont flourished. The project submits annual compliance reports to the Vermont Division for Historic Preservation to ensure proper stewardship of these resources.

Recreational resources at the project include a canoe portage and picnic area. The project owner voluntarily revised the Passumpsic River Canoeing and Recreation Guide and provides guided facility tours. Public access is provided free of charge.

2021: The project reported being out of service since April 2020 due to safety concerns related to flashboard operations. The project remains in compliance based on the annual review.

2018: The project reported installing new signage, two new parking spaces adjacent to the powerhouse, and an improved informal path leading from the powerhouse parking area to the River. FERC approved the changes and revised recreation plan in 2018. The project remains in compliance based on the annual review.

August 15, 2018: The decision to recertify the Gage Hydroelectric Project is final. No appeals were received during the appeal period which closed on August 11, 2018. The new term for the Gage Project is from February 6, 2017 through February 5, 2022.

This decision is preliminary pending the 30-day appeal window. Only those who commented in the initial application during the 60-day comment period are eligible to file an appeal. Such appeal needs to include an explanation as to how the projects do not meet the LIHI criteria. Appeal requests can be submitted by email to comments@lowimpacthydro.org with “Gage Hydroelectric Project” in the subject line, or by mail addressed to the Low Impact Hydropower Institute, 329 Massachusetts Ave, Suite 2, Lexington, MA 02420. All requests will be posted to the website and the applicant will have an opportunity to respond and any response will also be posted. Requests must be received by 5 pm Eastern time on August 11, 2018.  The full application and reviewer’s report are available below.

If no appeal requests are received and the decision becomes final, the new term for the Gage Project will be February 6, 2017 through February 5, 2022.

December 30, 2016: The Low Impact Hydropower Institute has received a complete application for a new term of Low Impact Certification for the Gage Hydroelectric project. The application materials can be found in the Files section below.

LIHI is seeking public comment on this application.  Specifically, we are interested in knowing whether you think the Gage project meets the LIHI Low Impact Certification Criteria, as revised in the 2nd Edition Handbook released in March 2016.  Please review the program and criteria in LIHI’s revised Handbook and then review the Project’s 2016 application materials posted on the project page.

Comments that are directly tied to specific LIHI criteria (flows, water quality, fish passage, etc.) will be most helpful, but all comments will be considered.  Comments may be submitted to the Institute by e-mail at comments@lowimpacthydro.org with “Gage Project Comments” in the subject line, or by mail addressed to the Low Impact Hydropower Institute, PO Box 194, Harrington Park, New Jersey 07640.  Comments must be received at the Institute on or before 5 pm Eastern time on March 4, 2017 to be considered.  All comments will be posted to the web site and the applicant will have an opportunity to respond.  Any response will also be posted.

December 16, 2016: The Gage Hydroelectric project has been granted an extension of the current certificate term. The new expiration date is May 6, 2017. See extension letter for explanation below.

April 6, 2012: Public comment period on the application has closed.

February 6, 2012: The Central Vermont Public Service Corporation has submitted an application for the certification of the Gage Project. Public comment period has been opened.