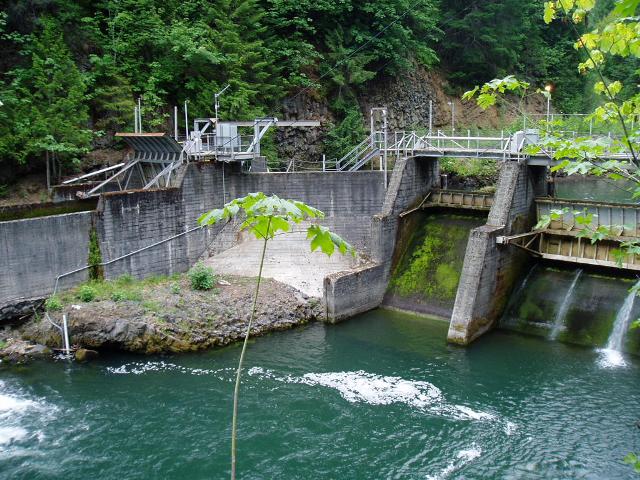 The project operates in a peaking mode, generating more electricity during high demand periods. Storage capacity is used at each of the reservoirs and forebays for this purpose, but relatively little storage is available at the developments, with the exception of Lemolo Reservoir, which is the primary source of water storage for shaping flows to daily peaking operations for the downstream developments. Clearwater Nos. 1 and 2 and Lemolo No. 2 developments usually are operated on a continuous basis because of their limited storage capacity. The Lemolo No. 1 development is also operated continuously although at very low generating levels during non-peak times. The Soda Springs development is used for reregulation of flows from upstream developments and is operated to release a baseflow based on ambient watershed runoff estimates with a goal of maintaining a relatively stable flow to the North Umpqua River below the Soda Springs powerhouse. A flow monitoring plan was developed for the project in consultation with US Fish and Wildlife Service (USFWS), the National Marine Fisheries Service (NMFS), US Forest Service (USFS), Oregon Department of Fish and Wildlife (ODFW), Oregon Department of Environmental Quality (ODEQ), Oregon Water Resources Department (OWRD), and the Federal Energy Regulatory Commission (FERC).

Two river reaches in the project area are listed as impaired. The first listing is for pH and total dissolved gas impairment in the reach downstream of the Lemolo 2 powerhouse and the second is listed for salmon spawning temperature in the reach downstream of the Soda Springs powerhouse. Additionally, Lemolo Reservoir has been intermittently listed for algae bloom advisories by the Oregon Health Authority. ODEQ has confirmed that the two impairments are not the fault of the project. A working group including ODEQ and other resource agencies determined that based on several years of monitoring, the algal bloom in Lemolo Reservoir is not caused by hydropower operations. The project owner has completed several years of water quality monitoring in conjunction with ODEQ to ensure the project does not adversely impact water quality standards in the river reaches.

Fish passage facilities were completed in 2012 to provide upstream and downstream passage as detailed via consultation with USFS, USFWS, ODFW, and NMFS. These facilities provide access to river reaches for anadromous fish species as well as riverine fish including resident trout species. The project owner contributes $100,000 (2001 dollars) annually to the Long-Term Monitoring and Predator Control Program, a fund created by the owner to monitor the passage of anadromous fish past the Soda Springs development. Passage at the development provides access to over 80% of the spawning and rearing habitat that was previously inaccessible to migratory fish especially spring Chinook salmon, on the main stem of the North Umpqua River and steelhead in Fish Creek.

The project lands consist of 3.085 acres. As mentioned above, the terrain in the project area has a rugged topography with steep canyons and rapid elevation changes, having been heavily influenced by volcanic activity. The project owner provides funds to implement watershed protection and enhancement measures.

PLUS-Standard: The project owner provides funds to implement watershed protection and enhancement measures. The funds include:

Several historic and cultural properties are located in the vicinity of each of the eight project developments. Thus, the project implemented a Historic Properties Management Plan (HPMP) in consultation with the Oregon State Historic Preservation Office, US Bureau of Land Management, and USFS. The plan provides guidance for protecting the properties in the project areas, and an annual report is provided detailing activities relating to the HPMP.

Recreational resources at the project include many camping areas at the developments, fishing access, boat ramps, hiking trails, and picnic areas. Public access is provided free of charge.

Condition satisfied in 2015. Condition 1. The owner of the North Umpqua facilities shall provide LIHI with a description of the current status and use of funds from the Mitigation Fund and the Tributary Enhancement Fund that were part of the Settlement Agreement for the most recent FERC licensing. In particular, this description shall identify the lands and waters that are benefiting from the funds and be sufficient to determine if these funds are achieving the ecological and recreational equivalent of land protection of the buffer zone referred to in Question D.1. This information will be used by LIHI staff to determine if the N. Umpqua certification qualifies for three additional years in its term. The description of the mitigation funds is due to LIHI within 60 days of issuance of the new certification.

2021: There were no reported changes. As a result of cultural and historic resource impacts, the project reported ongoing consultation with the SHPO, US Forest Service, and Tribes, and provided documentation of a detailed action plan to mitigate the potential for future inadvertent impacts. Based on ongoing efforts to improve protection and mitigation efforts, the project remains in compliance based on the annual review.

2020: There were no reported changes, one compliance issue was reported related to cultural and historic resources impacts resulting from transmission line repair work after the Archie Creek wildfire that had uncovered previously unidentified cultural sites. The project reported consultation with the SHPO, US Forest Service, and Tribes.  Therefore the project remains in compliance based on the annual review.

2018: There were no reported changes, one compliance issue was reported related to cultural and historic resource impacts along the transmission line during hazard tree removal. The project reported instituting a mitigation plan including additional contractor training, in consultation with the SHPO and Tribes. Therefore, the project remains in compliance based on the annual review.

2015: There were no reported changes or compliance issues. The project remains in compliance based on the annual review.  For Condition 1, the project provided the required documentation, thus satisfying the condition and extending the LIHI term by three years.

August 20, 2015: As per the decision of Executive Director Michael J. Sale, upon satisfactory demonstration by PacifiCorp of the project-specific condition requirements for the North Umpqua certification issued on June 26, 2015, the term of the North Umpqua certification shall now be for eight (8) years, expiring on December 7, 2022. Please refer to the PacifiCorp response to Condition 1 documentation below.

June 26, 2015: Executive Director Michael J. Sale, using authority delegated from the LIHI Governing Board, has determined that the North Umpqua Hydroelectric Project (FERC No. P-1927) continues to satisfy the LIHI Certification Criteria. The effective certification date for the North Umpqua Project is December 7, 2014 for a five (5) year term, which will expire on December 7, 2019.

February 3, 2015: The Low Impact Hydropower Institute received a complete and timely application for a new term of Low Impact Certification for the North Umpqua hydroelectric project on November 20, 2014.  Please see the application files below.

March 24, 2011: The North Umpqua Hydroelectric Project has been certified as low impact for a five year term, effective December 7, 2009 and expiring December 7, 2014.

February 9, 2010: LIHI received comments from the University of Montana, Umpqua Watersheds, Oregon Wild American Rivers, Pacific Rivers Council, Native Fish Society, and the Steamboaters. These letters are consolidated in the Stakeholder Comment Letters in the “Files” section below.

February 7, 2010: The public comment period on the application for certification has been closed.

February 4, 2010: LIHI received a comment letter from USFWS. The letter is available in the “Files” section below.

December 7, 2009: PacifiCorp Energy has submitted an application for certification of the North Umpqua Hydroelectric Project. The public comment period will remain open for 60 days.