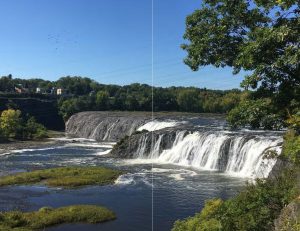 The School Street Project is located in Cohoes, New York on the Mohawk River. The project dam was constructed in 1831. Electric power generation commenced in 1916, and additional generating units were added in 1922 and 1925. The Mohawk River has five permanent dams, nine seasonal (movable) dams, and five active hydropower facilities. Upstream are the Vischer-Ferry and Crescent projects and downstream are the NY State Dam and Mohawk Paper Mills Inc. projects. The School Street project is located between the Crescent and NY State Dam projects.

The masonry gravity overflow dam is a 1,280-foot-long, 16-foot-high structure with an adjacent 375-foot-long, 18-foot-high ice fender. The upper gatehouse is 206 feet long, with nine timber slide gates and three steel Tainter gates, and controls flows to a 4,400-foot long, 150-foot-wide power canal located along the west bank of the river. This conveys water to a 152-foot-long lower gatehouse with five steel headgates equipped with 3.1-inch clear bar spaced trashracks, leading to five 190-foot-long penstocks, four 11-foot-diameter, and one 13-foot-diameter. Water is conveyed via the penstocks to a powerhouse containing five generating units with a combined capacity of 38.8 MW. The power canal, penstocks, and bypassed reach of the Mohawk River that is over 4,500 feet long and includes Cohoes Falls, a 65-foot-tall natural waterfall.

The project operates in a run-of-river mode and impounds a 100-acre reservoir. The project provides seasonal minimum flows as follows:

The project also provides aesthetic flows of at least 500 cfs into the bypass reach over Cohoes Falls during daylight hours on weekends and federal holidays from May 15 to October 31. This flow regime was developed in consultation with US Fish and Wildlife Service, New York State Department of Environmental Conservation (NYSDEC), and several non-governmental participants.

Waters within the project reach are designated as Class C which are managed to fully support fishing, aquatic biota, wildlife, and primary/secondary contact recreation. The project’s river reach is not listed on the State of New York 303(d) List of Impaired Waters, however NYSDEC lists many portions of the upper Mohawk River on its 2016 List of Priority Surface Waters.

Historically, migrating fish were able to ascend all the way up to Cohoes Falls which forms a natural barrier to upstream fish passage. The Mohawk River thus was an important spawning ground for fish species like alewife, blueback herring, shad, and sturgeon. Presently, these species are able to establish themselves upstream of the project via the Waterford Flight Canal boat locks system. Downstream fish passage is provided via a screened bypass flow release mechanism. An angled bar rack with 4-inch spacing is installed and from April 15 through November 30 a 1-inch overlay is installed.

The project lands consist of roughly 147 acres. The west shoreline of the project contains rural housing and industrial uses while the east shoreline is undeveloped, comprised of mixed forest, wooded and herbaceous wetland, and some pastures. No lands of significant ecological value exist in the project area as lands are mostly developed.

Threatened or endangered species potentially present in the project vicinity include the Northern long-eared bat, bald eagle, short-eared owl, and upland sandpiper. The lands do not contain any priority habitat for the listed species as confirmed by the NYSDEC. No project upgrades are currently planned but coordination with the proper state and federal agencies must occur should any significant clearing activities be planned.

Recreational resources at the project include fishing access, hiking trails, picnic area, footbridge and a viewing area of Cohoes Falls. Access for the disabled is provided and public access is provided free of charge.

February 7, 2020: The decision to recertify the School Street Project became final after the close of the appeals period on February 5, 2020 with no appeals filed.  The Certification term is from November 20, 2019 – November 19, 2024. The Certification includes one condition:

This decision is preliminary pending the 30-day appeal window. Only those who commented on the initial application during the 60-day comment period are eligible to file an appeal. Such appeal needs to include an explanation as to how the Project does not meet the LIHI criteria. Appeal requests can be submitted by email to comments@lowimpacthydro.org with “School Street Hydroelectric Project” in the subject line, or by mail addressed to the Low Impact Hydropower Institute, 329 Massachusetts Ave, Suite 6, Lexington, MA 02420. All requests will be posted to the website.  The applicant will have an opportunity to respond and any response will also be posted. Requests must be received by 5 pm Eastern time on February 5, 2020.  The full application and reviewers report are available HERE.

If no appeal requests are received and the decision becomes final, the Certification term for the Project will be from November 20, 2019 to November 19, 2024.

August 15, 2019: The Low Impact Hydropower Institute has received a complete application for Low Impact Recertification of the School Street Hydroelectric Project.  LIHI is seeking public comment on this application.  Specifically, we are interested in knowing whether you think the Project meets the LIHI Low Impact Certification Criteria, as revised in the 2nd Edition Handbook.  Please review the program and criteria in LIHI’s revised Handbook and then review the Project’s application materials below.

Comments that are directly tied to specific LIHI criteria (flows, water quality, fish passage, etc.) will be most helpful, but all comments will be considered.  Comments may be submitted to the Institute by e-mail at comments@lowimpacthydro.org with “School Street Project Comments” in the subject line, or by mail addressed to the Low Impact Hydropower Institute, 329 Massachusetts Avenue, Suite 6, Lexington, MA 02420.  Comments must be received on or before 5 pm Eastern time on October 14, 2019 to be considered.  All comments will be posted to the web site and the applicant will have an opportunity to respond.  Any response will also be posted.

June 6, 2016: LIHI Executive Director Michael J. Sale, using authority delegated from the LIHI Governing Board, has certified that the School Street Hydroelectric Project (FERC No. P-2539) satisfies the LIHI Certification Criteria. A Preliminary Certification Decision was announced on May 3, 2016, and a 30-day appeal period was open through June 3, 2016. No requests for appeal were received. This Certification Decision includes two facility-specific conditions, as follows:

November 19, 2014: On October 21, the Low Impact Hydropower Institute (LIHI) received an application for a second term of Low Impact Certification of the School Street Hydroelectric Project, FERC #2539, located on the Mohawk River in New York. The current Certificate term was scheduled to expire on November 20, 2014, but LIHI has granted a short term extension on the current certificate term to allow for administrative review of the application.  The certificate term has been extended through January 31, 2014.

November 29, 2010: The School Street Hydroelectric Project has been certified as low impact for a five year term, effective November 20, 2009 and expiring November 20, 2014.

November 20, 2009: Erie Boulevard Hydro, L.P. has submitted an application for the certification of the School Street Hydroelectric Project. The public comment period will remain open for 60 days.