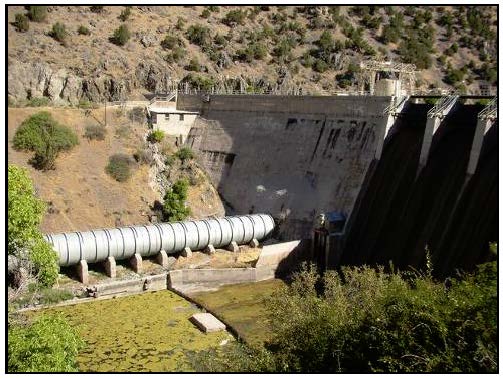 The Cutler Project is located in northern Utah between the Bear River and Wellsville Mountain ranges, mostly in Cache County, and impounds waters from the Bear, Little Bear, Logan, and Spring Creek rivers. The project is part of the Bear River Basin which extends through northeastern Utah, southeastern Idaho, and southwestern Wyoming. The basin comprises approximately 7,500 square miles of mountain and valley lands (2,700 in Idaho, 3,300 in Utah, and 1,500 in Wyoming). The Bear River begins in the Uinta Mountains in Utah and extends 500 miles, crossing state boundaries five times over the three states before ending in the Great Salt Lake, Utah. It is the largest tributary to the Great Salt Lake and the largest stream in the western hemisphere that does not empty into an ocean. The Bear River is unique in that it is entirely enclosed by mountains, thus forming a huge basin with no external drainage outlets.

The project includes a 545-foot-long, 126-foot-high concrete gravity arch dam built in 1927. The dam has a spillway containing four 30-foot-wide by 14-foot-high radial gates. Irrigation canal intake gates are located at each abutment of the dam and are an integral part of the structure. Much of the reservoir has the characteristics of a shallow-water emergent marsh: the southern portion of the reservoir has a mean depth of 1.8 feet, while the slightly deeper section of the reservoir to the north has a mean depth of 3.6 feet; the northernmost portion of the reservoir located in Cutler Canyon is deeper and includes areas with depths up to 20 feet. The flowline intake is a concrete tower located in the reservoir approximately 60 feet upstream of the dam. It connects to an 18-foot-diameter steel-lined conduit that passes through the dam. A 1,160-foot-long, 18-foot-diameter steel penstock carries water to an 81-foot-high, 45-foot-diameter steel surge tank. Two 112-foot-long steel penstocks bifurcate from the surge tank and lead to the powerhouse. The powerhouse is a brick building containing appurtenant facilities and two vertical Francis generating units with a total installed capacity of 30 MW.

The project operates in a run-of-river mode and impounds an approximately 5,500-acre reservoir. The project operates seasonally in normal and low-water years, generally from late fall through early summer, based on the availability of flows after irrigation commitments are met (during high-water years there may be additional available flow). Typically, in order to meet the required irrigation contracts, the project suspends normal generation operations during summer flows (late-June or July through September or October), but the facility remains available to provide short-duration emergency generation (spinning reserve). During normal operation periods, the project is operated in a semi-automatic mode whereby the generators are started and synchronized to the system manually by the local operator. Resource agencies including the Utah Division of Wildlife Resources (UDWR) and USFWS provided recommendations to protect aquatic resources. These focused on maintaining and stabilizing the reservoir levels.

Waters within the project reach are listed as impaired for dissolved oxygen and phosphorus. The Utah Department of Environmental Quality (UDEQ) has concluded that the impairments are likely due to agricultural impacts and wastewater treatment plants upstream of the project. The project’s resource management plan monitoring reports document the implementation of measures including reducing non-point source pollution into the river and water quality monitoring, among others. This report is prepared in collaboration with USFWS, the US Forest Service, the National Parks Service, UDWR, the Utah Division of Water Resources, and the Utah Division of Parks and Recreation. These resource agencies have noted the success of mitigation efforts at the project, and UDEQ specifically provided their support of the project’s positive influence on water quality in the basin.

The Bear River is a tributary to the Great Salt Lake and has historically not supported any anadromous or catadromous fish species. Habitat improvement structures were recommended by resource agencies but the water quality in the watershed has led to a decline of the native fishery overall. Resident fish species include black bullhead, largemouth bass, black crappie, green sunfish, catfish, and bluegill; with the exception of Utah sucker, no native fish were documented during the most recent surveys of the reservoir, and no native fish species at all were documented in the Bear River below the reservoir.

PLUS-Standard: Over 1,225-acres (99.6% of undeveloped land) of plants (predominately native grasses and shrubs) have been established around the reservoir. The buffer includes a vegetation enhancement program, protecting and creating designated wildlife habitats and reclaiming habitats with a mixture of native and non-native grasses and plants, establishing fencing to keep grazing animals from eroding the shoreline, and monitoring the zones and tenant’s compliance with lease terms annually. An agricultural lease program was also established to provide grazing land and farmland for local farmers. The program contains strict requirements to aid shoreline protection including restrictions on tilling and use of pesticides and herbicides.

Rare or sensitive species present in the project vicinity include the Bald eagle (unlisted in area), Long-billed Curlew, Short-eared Owl, and California Floater (an aquatic mollusk species); a single federally listed Threatened plant species is present on project lands: the Ute ladies’-tresses orchid. USFWS has confirmed that the project does not impact listed species.

Cultural resources in the project area include the dam and powerhouse which are listed on the National Register of Historic Places. The project operates under a cultural resources management plan which contains provisions for consultation with the State Historic Preservation Office in the event of new resource discovery as well as protection and mitigation of any project impacts on listed resources.

Additional details regarding the Cutler Hydroelectric Project and its ongoing relicensing process can be found HERE.

Condition 1.  The facility owner shall notify the Utah Division of Wildlife Resources, Northern Region Aquatic Manager, prior to any reservoir drawdowns that exceed normal Cutler operating conditions, and work with that agency to minimize the impact of any such drawdown to sensitive aquatic species.

Condition satisfied in 2019. Condition 2.  If a viable population of bluehead sucker (Catostomus discobolus) is found in or below Cutler Reservoir in the future, a meeting between PacifiCorp and the UDWR will be initiated to discuss life history needs of this species.  The facility owner shall notify LIHI within 30 days of any such finding and shall keep LIHI informed of the results and courses of action taken as a result of the discussions with UDWR.

2021: There were no reported changes or compliance issues. The project remains in compliance based on the annual review.  For Condition 1, the project reported no activity.  The project filed its draft FERC relicensing application on 10/29/2021.

2020: There were no reported changes or compliance issues. The project remains in compliance based on the annual review.  For Condition 1, the project reported no activity.

2015: There were no reported changes or compliance issues. The project remains in compliance based on the annual review.

2014: Annual reporting for the current Certificate has not yet taken effect.

June 28, 2022: In accordance with Section 6.1 of the LIHI Handbook, the LIHI Technical Committee recently voted to extend the current certificate term by one year to allow for the FERC relicensing process to complete.

August 12, 2015: LIHI Executive Director Michael J. Sale, using authority delegated from the LIHI Governing Board, has determined that the Cutler Hydroelectric Project (FERC No. 2420) continues to meet the LIHI Certification Criteria. The effective certification date for the Cutler Project is December 31, 2014 for an eight (8) year term, which will expire on December 31, 2022.

February 3, 2015: The Low Impact Hydropower Institute received a complete and timely application for a new term of Low Impact Certification for the Cutler Hydroelectric project on November 20, 2014.  Please see the application files below.

December 31, 2009: PacifiCorp Energy has submitted an application for the certification of the Cutler Hydroelectric Project. Public comment period will remain open for 60 days.