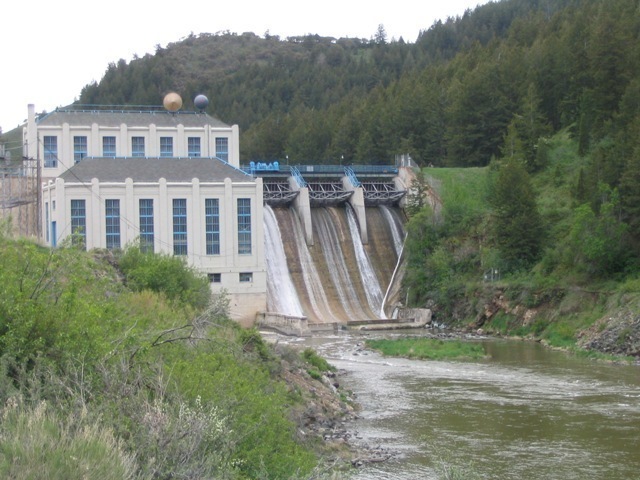 The project operates in coordinated modified run-of-river mode to meet irrigation demands in addition to generating power. River flows are generally higher than the natural conditions during the irrigation season (April through October) due to irrigation releases from Bear Lake. The Soda, Grace, and Oneida developments are usually operated in a modified run-of-river mode during this season; water stored in Soda and Oneida reservoirs may be used to satisfy short-term irrigation demand. Each development provides minimum flows:

Waters within the project reach are used for irrigation and power generation. Water quality monitoring has occurred several times at the developments to determine the project’s impacts on temperature, dissolved oxygen, nutrients, and turbidity. The primary concern with water quality at the project is excess sediment which was mitigated via the elimination of peaking events and the establishment of a maximum ramping rate. The Idaho Department of Environmental Quality has noted that the project is not contributing to exceedances of water quality standards.

No anadromous fish species have been noted in the project area. Additionally, there are limited numbers of native fish in Bear River, thus fish entrainment has not been a significant issue at the project. Bear River has been targeted for restoration, enhancement, and protection activities for riverine fisheries with a particular focus on the Bonneville cutthroat trout. A Restoration Study Plan was implemented to establish baseline habitat conditions and fish passage obstruction and diversion information in order to better conserve this species.

The project lands consist of 42 acres. The project operates under a Habitat Restoration Program, contributes to a Land and Water Conservation Fund, funds a broodstock and conservation hatchery program with Idaho Department of Fish and Game, and contributes to creel and macroinvertebrate studies. Project contributions to these programs and funds totaled $648,000 originally with annual funding of up to $567,000 to support watershed protection, as approved under the relicensing Settlement Agreement. These programs have established conservation lands, helped to enhance Bonneville cutthroat trout populations, assessed recreation impacts on the river, and more.

PLUS-Standard: The project owner provides annual funding of over $500,000 to support habitat conservation measures in areas impacted by the project. Dedicated buffer zones have also been established around the project areas. Collectively, approximately 1,637 acres have been designated conservation lands.

Threatened or endangered species potentially present in the project vicinity include the bald eagle, Canada lynx, Ute’s ladies’ tresses, Kelsey’s phlox, and red glasswort. Consultation with the US Fish and Wildlife Service concluded that project operations are not likely to adversely impact any of the listed species.

The three developments each support several historic or archaeological sites. In total, the project has over 60 sites of historic or archaeological significance, thus a Historic Properties Management Plan was developed to protect and manage these properties. Annual reports of activities concerning these sites are filed with the State Historic Preservation Office, the US Bureau of Land Management, and the Shoshone-Bannock Tribes. Project operational staff receive cultural resources training to ensure proper stewardship of the properties.

Recreational resources at the project include two campgrounds managed by the Bureau of Land Management, put-in/take-out access points in the Grace bypass and Oneida downstream reach, and whitewater releases conducted in consultation with American Whitewater. Additionally, the project provides funding to the Bureau of Land Management and Caribou and Franklin County for management of the recreational sites in the project vicinity. Public access is provided free of charge to the reservoirs and downstream reaches of the projects.

July 24, 2015: LIHI Executive Director Michael J. Sale, using authority delegated from the LIHI Governing Board, has determined that the Bear River Hydroelectric Project (FERC No. 20) continues to meet the LIHI Certification Criteria. The effective certification date for the Bear River Project is December 31, 2014 for an eight (8) year term, which will expire on December 31, 2022. The additional three years are earned for enhancements to the watershed.

February 3, 2015: The Low Impact Hydropower Institute received a complete and timely application for a new term of Low Impact Certification for the Bear River Hydroelectric project on November 20, 2014.  Please see the application files below.

December 31, 2009: PacifiCorp Energy has submitted an application for certification of the Bear River Hydroelectric Project. A public comment period will remain open for 60 days.