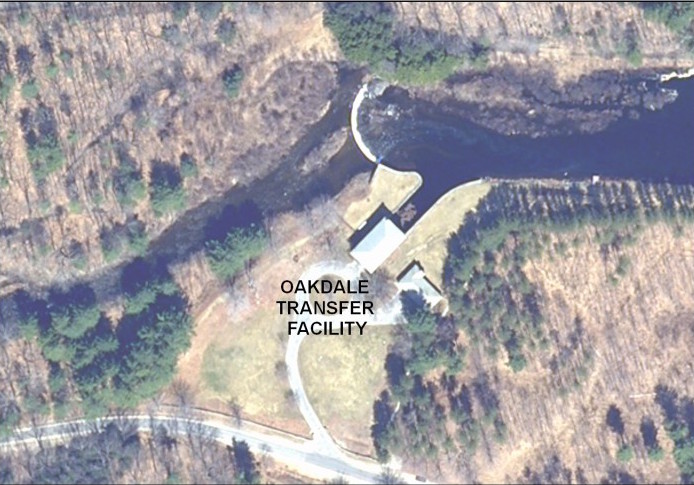 The MWRA water transmission system consists of over 100 miles of tunnels and aqueducts that transport water largely by gravity to points of distribution within the MWRA service area. There are three locations within this water transmission system where hydroelectric facilities are located. These include Oakdale at the end of the Quabbin Aqueduct; the Cosgrove Intake to the Cosgrove Aqueduct (LIHI #55); and the Loring Road Covered Storage Facility (LIHI #56).

The Oakdale facility was constructed in 1929 as an outlet works of Quabbin Tunnel and was initially operated solely as a water transfer station. In 1949, a hydropower generator was added.

The hydropower generated is sold to the local distribution company, National Grid. Revenues from the sale of power to NGRID are used to offset the costs of operating the Massachusetts Department of Conservation and Recreation’s (DCR) Watershed Protection Division. DCR and MWRA are partners in watershed protection and MWRA rate payers fund the DCR Watershed Protection Division.

Quabbin Aqueduct is a deep rock tunnel. The water enters the aqueduct at Quabbin Aqueduct Intake, Shaft 12 and travels over 24 miles to its terminus to the Oakdale transfer station in West Boylston Massachusetts. It is one of the locations in the water transmission system where MWRA captures energy in the falling water as it is conveyed from higher elevations in the western portion of the MWRA system (Quabbin Reservoir) to lower elevations in the distribution area. Generation of hydropower is secondary to MWRA’s primary objective of water supply and is legally subordinate to MWRA’s obligation to provide high quality drinking water.

The project operates as a conduit facility and is located on a water transfer aqueduct. The project is not associated with a dam, bypass reach or flow release schedule. Waters are transferred from one water supply reservoir to another and do not discharge into a river.

Waters within the project reach are utilized for water supply purposes and are thus high quality and potable.

Fish passage is not necessary nor feasible due to the conduit nature of the project.

The facility is located in a water distribution facility and the DCR’s Division of Water Supply is responsible for shoreline protection.

There are no threatened or endangered species potentially present at the project that would be affected by the hydro operation. Similarly, no cultural or historic resources exist at the project.

The project is located at a public water supply which restricts public access to project facilities. A public access plan has been developed which allows for recreation such as shore-line fishing, hiking, bird watching, and snowshoeing around the reservoir. The plan delineates where these activities are permitted and restricts boat access on the water supply reservoir.

2015: Annual reporting for the current Certificate has not yet taken effect.

December 7, 2015: LIHI Executive Director Michael J. Sale, using authority delegated from the LIHI Governing Board, has issued a Preliminary Certification Decision that the Oakdale Hydroelectric Project (FERC No. P-10689) continues to satisfy the LIHI Certification Criteria. A Preliminary Decision was announced on December 14, 2015, and a 30-day appeal period was open through January 14, 2016. No requests for appeal were received.

October 22, 2015:  The Oakdale Hydroelectric Project has been granted an additional extension, the new expiration date is December 31, 2015.

September 30, 2015 – The Low Impact Hydropower Institute received a complete application for a new term of Low Impact Certification for the Oakdale Hydroelectric project on September 21, 2015.  The application materials can be found in the Files section below.

The public comment period for this application closed on November 30, 2015.

June 19, 2015: The Oakdale Hydroelectric project has been granted an extension of the current certificate term. The new expiration date is October 11, 2015.

July 21, 2010: The Oakdale Hydroelectric Project has been certified as low impact for a five year term, effective April 14, 2010 and expiring April 14, 2015. The certification includes the following condition:

June 14, 2010: The public comment period for the application for certification has been closed.

June 9, 2010: LIHI received the following comment letter from the USFWS regarding the Oakdale Project. It can be found in the Files section below.

April 14, 2010: The Massachusetts Water Resources Authority (MWRA) has submitted an application for the certification of the Oakdale Hydro Project. A public comment period will remain open for 60 days.