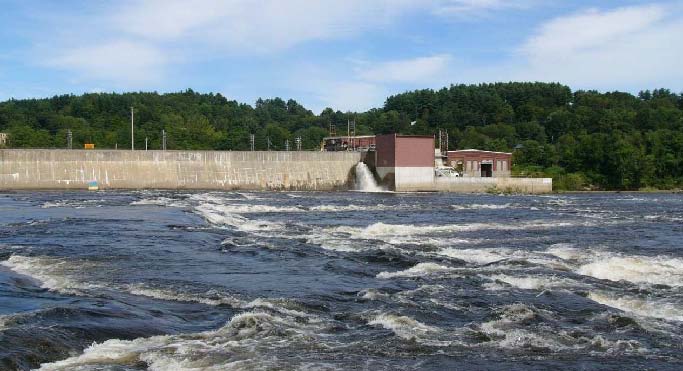 The Androscoggin Project is located on the Androscoggin River near the towns of Canton, Jay, and Livermore, Maine. The Androscoggin River drains a watershed of 3,550 square miles and is head-watered in Umbagog Lake in Coos County, New Hampshire. The river flows south for 164 miles and joins the Kennebec River before entering into the Gulf of Maine. Twenty-five major dams have been constructed on the Androscoggin River: five downstream of the Project and 16 upstream of the Project. Five of the upstream dams form large storage reservoirs located primarily in northern Maine. These storage reservoirs are operated to provide a reliable uniform target flow during the summer at Berlin, New Hampshire. These releases, augmented by tributary inflow, provide water for the Androscoggin Project. The project consists of four separate facilities: Riley, Jay, Otis, and Livermore.

The project operates in a run-of-river mode with varying minimum flow provisions. The Riley, Jay, and Livermore developments maintain:

This flow regime was developed by the Maine Department of Environmental Protection (MDEP).

The Androscoggin River has historically been contaminated by past industrial actions resulting in poor water quality conditions. MDEP has prohibited the consumption of fish from the river due to the high levels of contamination. MDEP has concluded that the project developments do not adversely impact the river’s water quality.

The project lands consist of roughly 29 acres. The area in the project vicinity is mostly composed of forested land, rural and residential housing, small towns, and some industrial and commercial areas. The Androscoggin Verso Paper Mill is located in Jay, Maine between the Riley and Jay facilities. The FERC boundary encompasses only the immediate shoreline and lands around project facilities. Beyond the FERC boundary there are forested areas on both sides for the river. No lands of significant ecological value exist in the project area.

Threatened or endangered species potentially present in the project vicinity include the Northern long-eared bat, bald eagle, and spotted wintergreen. The most common disturbance to the species and their habitat is tree-clearing activities and corridor maintenance. No such activities are planned at the project and project operations are not expected to impact the bat species. Similarly, no maintenance activities or operations are expected to impact bald eagles that may occur in the area. Consultation with the Maine Department of Agriculture, Conservation, and Forestry concluded that plant species would not be impact by project operations.

Studies conducted prior to the issuance of the project’s Federal Energy Regulatory Commission (FERC) license revealed that the area around the project developments is culturally rich. Over 60 aboriginal sites and six prehistoric sites were identified in the study. The study found that humans entered the Androscoggin River basin headwaters between 9000 and 7000 BC. Canton Point, located on the Riley impoundment, was identified as the center of native activities for the entire Androscoggin River. A Programmatic Agreement was entered into by the project owner, Advisory Council on Historic Preservation, FERC, and the Maine State Historic Preservation Office to ensure the proper stewardship of the historic properties.

Recreational resources at the project include several boat launches, carry-in boat access, picnic areas, hiking trails, fishing access, and several more informal access points. The resources at the Riley development receive the most use while the facilities at the Jay development are not utilized as often. Public access is provided free of charge.

2022: No material changes or compliance issues were identified. The project remains in compliance based on the annual review.  The project received a license amendment to bury part of the Livermore transmission line within the existing right-of-way.  An environmental analysis was completed as part of the amendment application and no significant adverse impacts were identified. Agencies concurred.

February 10, 2020: The decision to recertify the Androscoggin Project became final after the close of the appeals period on February 8, 2020 with no appeals filed.  The Certification term is from September 25, 2019 – September 24, 2024.

This decision is preliminary pending the 30-day appeal window. Only those who commented on the initial application during the 60-day comment period are eligible to file an appeal. Such appeal needs to include an explanation as to how the Project does not meet the LIHI criteria. Appeal requests can be submitted by email to comments@lowimpacthydro.org with “Androscoggin Project” in the subject line, or by mail addressed to the Low Impact Hydropower Institute, 329 Massachusetts Ave, Suite 6, Lexington, MA 02420. All requests will be posted to the website.  The applicant will have an opportunity to respond and any response will also be posted. Requests must be received by 5 pm Eastern time on February 8, 2020.  The full application and reviewers report are available below.

If no appeal requests are received and the decision becomes final, the Certification term for the Project will be from September 25, 2019 to September 24, 2024.

October 3, 2019: The Low Impact Hydropower Institute has received a complete application for Low Impact Recertification of the Androscoggin Hydroelectric Project.  LIHI is seeking public comment on this application.  Specifically, we are interested in knowing whether you think the Project meets the LIHI Low Impact Certification Criteria, as revised in the 2nd Edition Handbook.  Please review the program and criteria in LIHI’s revised Handbook and then review the Project’s application materials below.

Comments that are directly tied to specific LIHI criteria (flows, water quality, fish passage, etc.) will be most helpful, but all comments will be considered.  Comments may be submitted to the Institute by e-mail at comments@lowimpacthydro.org with “Androscoggin Project Comments” in the subject line, or by mail addressed to the Low Impact Hydropower Institute, 329 Massachusetts Avenue, Suite 6, Lexington, MA 02420.  Comments must be received on or before 5 pm Eastern time on December 3, 2019 to be considered.  All comments will be posted to the web site and the applicant will have an opportunity to respond.  Any response will also be posted.

July 21, 2014: The Low Impact Hydropower Institute has received an application for a second term of certification of the Androscoggin Hydroelectric Project. The application materials are posted in the “Files” section below.

April 8, 2010: The Androscoggin Hydroelectric Project has been certified as low impact for a five year term, effective September 25, 2009 and expiring September 25, 2014.