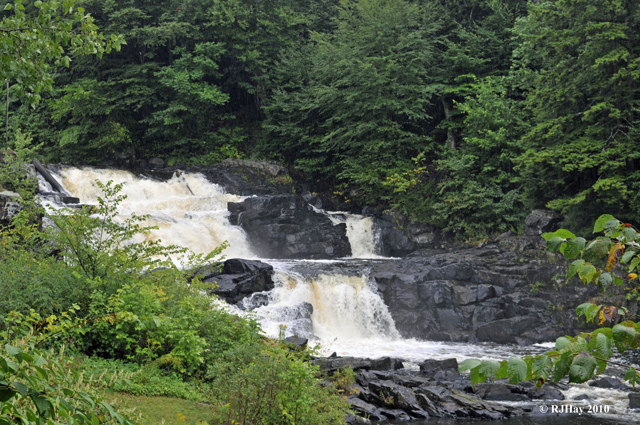 The West Branch St. Regis Project consists of two developments, Parishville and Allens Falls. The developments are located on the West Branch of the St. Regis River which originates near Saranac Lake, New York. The two facilities were constructed in the 1920s.

The West Branch of the St. Regis River is approximately 70 miles long and has a drainage area of approximately 271 square miles. The river originates in head ponds of Saranac Lake, New York, flowing northwest approximately 35 miles to the Parishville impoundment, another 2 miles to Allens Falls dam, and then another 18 miles to its junction with the St. Regis River, which in turn enters the St. Lawrence River 20 miles farther downstream.

The two developments were originally licensed separately in 1988, though they now are consolidated into one project, operating under terms of its federal license and a Settlement Agreement. The Settlement Agreement (SA) was entered into by the project owner with signatories including the Adirondack Mountain Club, American Rivers, American Whitewater, New York State Department of Environmental Conservation (NYSDEC), the New York State Conservation Council, US Fish and Wildlife Service (USFWS), New York Rivers United, St. Lawrence County, the Town of Parishville, and Trout Unlimited. The agreement provides provisions for “mitigation and protections measures to increase habitat gains for fish communities, the potential for benthic invertebrate and forage fish production increases, enhanced fish movement and fishing opportunities, increased habitat for riparian vegetation, wetland and wildlife resources, the reduction of the vulnerability of fish to illegal poaching, increased recreational access, enhanced awareness of cultural resources, and the establishment of a river advisory council and enhancement fund.”

The Parishville development consists of:

The Allens Falls development consists of:

The project operates in a pulsing mode with minimum flows designed to restore previously periodically dewatered downstream reaches to year-round functional river reaches. The Parishville development limits impoundment fluctuations to one-half foot and provides a year-round minimum flow of 20 cfs. The Allens Falls development limits impoundment fluctuations to one-half foot, though impoundment elevation varies seasonally. Minimum flows from the dam are also seasonal: 30 cfs from October 1 through March 31; 50 cfs from April 1 through August 31; and 40 cfs from September 1 through September 30. The flow regime was developed based on demonstration flow studies conducted with the SA parties. The study data were assessed to maximize habitat gains for aquatic biota, riparian vegetation productivity, and wildlife protection. The Allens Falls minimum flows also provide potential base flow for the introduction of Atlantic salmon to the river below the Allens Falls waterfalls.

Waters within the project reach are designated as Class B waters in the Parishville impoundment, supportive of primary contact recreation and aquatic life. The Parishville bypassed and downstream reaches are Class C waters, similarly supportive of aquatic life, but not primary contact recreation. The Allens Falls impoundment, bypassed reach, and downstream reach are all designated as Class C waters. The lower portion of the West Branch of the St. Regis River is a threatened water due to unspecified pollutants endangering aquatic life uses.

The project lands consist of roughly 260 acres. The SA established a St. Regis River Fund to support ecosystem enhancement, fish stocking, new recreation, and other environmental improvements. The project owner provides annual contributions to the fund and flow operations support preservation of shoreline habitat, riparian zone enhancement, as well as wetland and wildlife resources. The Parishville impoundment is undeveloped with public recreational facilities. The shoreline is forested with some seasonal residences nearby. The Allens Falls impoundment is surrounded by residential housing and some wetlands in the backwaters of small coves. The bypassed reach is forested with several seasonal residences.

Based on consultation with the USFWS, there are no federally threatened or endangered species present in the project vicinity. Some transient bird species may be found in the project area including bald eagle, black-billed cuckoo, bobolink, Canada warbler, Cape May warbler, Eastern whippoorwill, evening grosbeak, and wood thrush. These species are protected under the Migratory Birds Treaty Act and the Bald and Golden Eagle Protection Act. Several migratory fish species including lake sturgeon and Atlantic salmon, state and federally protected species respectively, are found in the West Branch of the St. Regis River. However, it is unlikely that these species are able to access the project reaches due to the natural falls downstream. The Parishville development supports a state-threatened species, Fernald’s sedge, and the rare Schweinitz’s flat sedge. The species were found in the early 2000s near the powerhouse and NYSDEC has recommended that the project owner seek consultation before performing any activities that could alter this potential habitat.

The Parishville and Allens Falls dams and powerhouses are considered eligible for listing on the National Register of Historic Places for their embodiment of construction and period characteristics. The New York State Historic Preservation Office (SHPO) has noted that the developments are representative of hydroelectric architecture and engineering that reflect the Post World War I standardization of hydro facilities. The project must consult with the SHPO if any further resources are found.

Recreational resources at the project include fishing access points, a boat ramp, and hiking trails. Public access is provided free of charge where safe.

February 11, 2021:  The decision to recertify the West Branch St. Regis Project became final after the close of the appeals period on February 5, 2021 with no appeals filed. The Certification term is from September 14, 2020 – September 13, 2025. The Certification includes the following condition:

This decision is preliminary pending the 30-day appeal window. Only those who commented on the initial application during the 60-day comment period are eligible to file an appeal. Such appeal needs to include an explanation as to how the Project does not meet the LIHI criteria. Appeal requests can be submitted by email to comments@lowimpacthydro.org with “West Branch St. Regis Project” in the subject line, or by mail addressed to the Low Impact Hydropower Institute, 1167 Massachusetts Ave, Arlington, MA 02476. All requests will be posted to the website. The applicant will have an opportunity to respond and any response will also be posted. Requests must be received by 5 pm Eastern time on February 5, 2021.