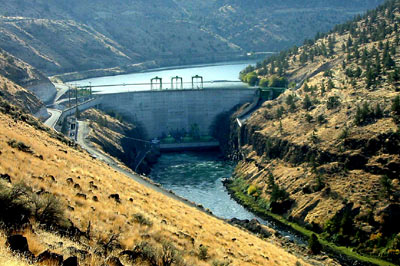 The Pelton Round Butte Project is owned and operated jointly by Portland General Electric Company (PGE) and the Confederated Tribes of the Warm Springs Reservation of Oregon. The project consists of the Round Butte, Pelton, and Reregulating developments located on the Deschutes River in Jefferson County, Oregon. The project is the largest hydroelectric project completely with Oregon’s boundaries.

The Round Butte and Pelton developments are operated as dispatchable facilities. During the spring fish migration season (March 15 to June 15), generation is shifted to the evening hours to improve fish collection, The Reregulating development is operated to attenuate high and low peak flows produced by the upstream developments. The project is operated to provide flow releases below the Reregulating development that equal or exceed the required minimum flow, a target flow ranging monthly from 3,500 cfs to 4,571 cfs.

Waters within the project reach are designated as not meeting water quality standards for flow modification, dissolved oxygen, pH, and temperature. Further, Lake Billy Chinook and Lake Simtustus are not meeting standards for pH and chlorophyll-a. However, the Oregon Department of Environmental Quality (ODEQ) has determined that the project is not responsible for these impairments. The project constantly monitors water quality conditions and adapts operations in an effort to properly manage the project reaches. Operations are reviewed by representatives of the National Marine Fisheries Service (NMFS), US Fish and Wildlife Service (USFWS), ODEQ, Bureau of Indian Affairs (BIA), Bureau of Land Management (BLM), US Forest Service (USFS), Trout Unlimited, and the Confederated Tribes of Warm Springs, Oregon. As a note, Trout Unlimited is the official voting member of this assembly representing the Native Fish Society, WaterWatch, Freshwater Trust, and American Rivers.

Several fish passage facilities have been implemented at the project developments. Migratory fish species in the project reach include Chinook salmon, sockeye salmon and steelhead. Migrating individuals are collected, trucked, and released below the Reregulating development to continue the journey to the sea. Returning adults are captured at the Pelton Adult Trap (located immediately downstream of the Reregulating development), trucked, and released into Lake Billy Chinook. Any non-migratory riverine species are released into Lake Bill Chinook. These passage facilities have been operational since 2010. A Fish Committee was developed by the signatories of the project’s Settlement Agreement. The committee is tasked with realizing fish passage goals and assessing the efficacy of passage facilities at the project. NMFS, USFWS, Oregon Department of Fish and Wildlife, Trout Unlimited, all of whom participate on the committee, have expressed their support for the ongoing passage efforts.

The Project boundary encompasses a total of approximately 14,300 acres. Most of this property is owned by the United States government and administered by the USFS, BLM, and BIA. Included in the total are approximately 2,162 acres of lands within the Warm Springs Indian Reservation. Lands adjoining the project include property owned by PGE, the United States government, the State of Oregon, the Tribes, and private citizens. US government land in the project vicinity consists primarily of the Deschutes National Forest and the Crooked River National Grassland. The Crooked River National Grassland is administered by the Ochoco National Forest. Additionally, the project includes 10,797 acres of undeveloped uplands that are managed for wildlife habitat. Of this total, 7,700 acres are located within the Metolius Mule Deer Winter Range, generally south and west of Lake Billy Chinook; approximately 3,000 acres are located in the Trout Creek basin, a tributary to the Deschutes River downstream of the project; and 97 acres are located along Campbell Creek near the Reregulating Reservoir within the project boundary. Considering only shoreline along the three impoundments, 55% is publicly owned, 30% is owned by the Tribes, 5% is owned by the project, and 10% is owned by private parties.

PLUS-Standard: The project owner has contributed over $20 million to the Pelton Round Butte Fund, a funding mechanism for river enhancement, riparian support, and acquisition of land, water, and water rights for conservation. Over 60 recipients have benefitted from the fund, resulting in benefits to Chinook salmon populations, wildlife restoration, and river quality enhancement.

Several archaeological, historic, and traditional use properties have been identified at the project. The project trains operational staff on proper stewardship of these resources and works with Warm Springs Geo Visions owned by the Confederated Tribes of the Warm Springs to provide guidance on preservation of resources in the project area. Annual reports are filed detailing protection activities, any potential concerns associated with cultural resources, and planned measures undertaken to repair damage or minimize potential for future damage.

March 11, 2016:  On October 1, 2015, LIHI announced the Preliminary Decision made by the LIHI Governing Board Technical Committee that the Pelton Round Butte (PRB) Hydroelectric Project (FERC No. 2030) continues to satisfy the LIHI Low Impact Certification Criteria.  A 30-day appeal period was open through October 31, 2015.  A request for appeal of the certification decision was filed by Deschutes River Alliance (DRA) on October 28, 2015.  LIHI staff considered the merits of the Appeal, accepted the appeal request, and with input from the two parties, formed an Appeals Panel to consider the record of decision.  On February 29, 2016 the Appeals Panel finalized their Determination, which is that the Preliminary Certification Decision was made correctly and is consistent with the LIHI Certification Criteria. The Panel affirmed the issuance of Certificate No. 25 for the Pelton Round Butte Project and recommended minor modifications of the associated, project-specific conditions. The PRB-DRA Appeal process has now been completed.

Three project-specific conditions will be part of the new certificate, reflecting the recommendations of the Appeal Panel, the LIHI Board, and LIHI staff.  The conditions are as follows:

The owner shall maintain a proactive approach to reducing the frequency and severity of such deviations and incidents to the extent reasonably possible.  The annual compliance report to LIHI will be used as confirmation that the facility owner is conducting the necessary actions to minimize such events and ensure compliance with LIHI’s flow, fish passage and endangered species criteria.

October 1, 2015:The LIHI Governing Board via a decision by its Technical Committee, determined that the the Pelton Round Butte Hydroelectric Project (FERC No. 2030) continues to satisfy the LIHI Certification Criteria. This is a Preliminary Decision and a 30-day appeal period will be open through October 31, 2015 for any Commenter on the Application to Recertify the Pelton Round Butte facility, who commented within the 60-day public comment period.

March 6, 2015: LIHI received a letter from Portland General Electric Company, in response to the comment letter received from the Deschutes River Alliance. The letter can be read in the Files section at the bottom of the page.

January 5, 2015:LIHI received a comment letter on the application for a second term from the Deschutes River Alliance, a science-­‐based, nonprofit, tax-­‐exempt organization advocating for the health of the Deschutes River.  To read the letter, click HERE or scroll to the bottom of the page.

November 7, 2014: LIHI received an application for a second term of Low Impact Certification of the Pelton Round Butte Hydroelectric Project, FERC #2030, located on the Deschutes River in Oregon. The current Certificate term was set to expire on October 30, 2014, however the Institute has extended the current term through March 31, 2015 in order to complete the application review.

The 2014 Pelton Round Butte application materials are available below.

October 30, 2006: Portland General Electric and the Confederated Tribes of the Warm Springs have filed an application for certification of the Pelton Round Butte Project, which they jointly own.