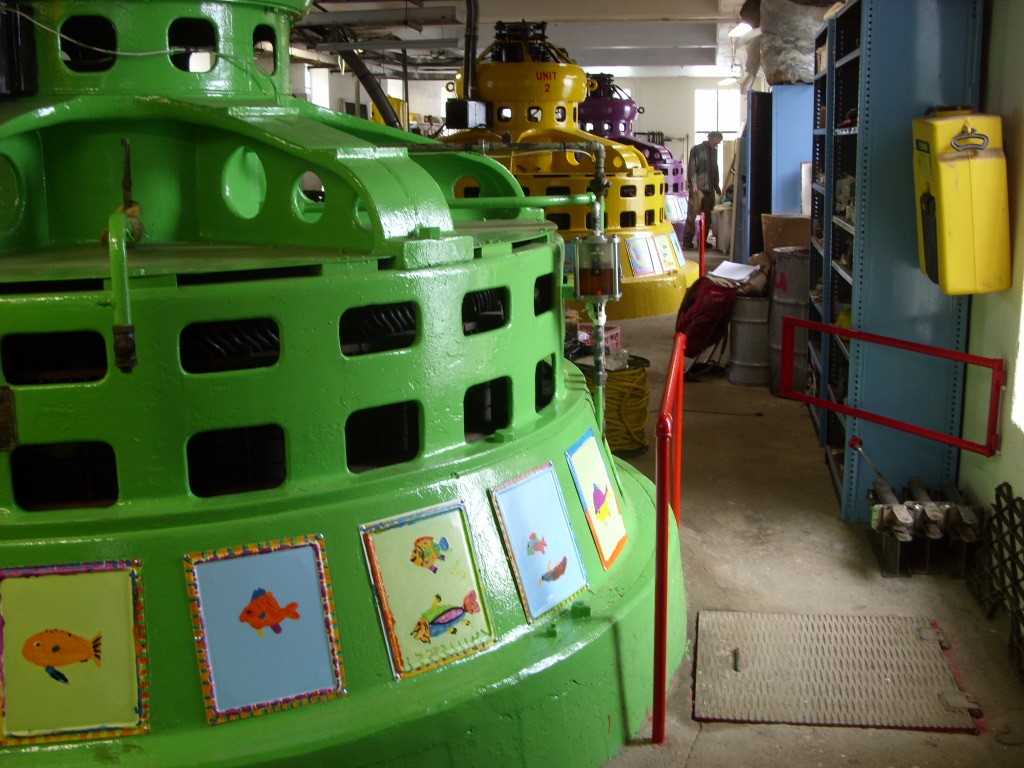 The Mother Ann Lee Project is located at Lock and Dam 7 on the Kentucky River. This dam is part of a system of 14 lock and dams installed on the Kentucky River between Beattyville in eastern Kentucky and Carrollton on the Ohio River. The navigation system established a transportation route deep into central and eastern Kentucky and provided access to the eastern Kentucky coalfields. The Shaker community at Pleasant Hill, located near Lock and Dam 7, relied heavily on the river system to ship its products as far away as New Orleans. In 1836, the Commonwealth of Kentucky constructed the first section of the system with Locks and Dams 1 through 5. In the late 1800’s, the U.S. Army Corps of Engineers (USACE) reconstructed the first 5 locks and dams, and then extended the system with Locks and Dams 6 through 14. The entire system through to Beattyville was completed in 1917.

Lock and Dam 7 was constructed in 1896 and 1897 by USACE at river mile 117, near High Bridge at the end of Kentucky Route 29 on the Jessamine County side of the river, and near the Shaker Landing on the Mercer County side.

While the Kentucky River Lock and Dam system was originally constructed for commercial transportation, over the many years since it was built, a number of other uses for the dams developed. Today, the dams are critical as the main source of drinking water for most citizens of central Kentucky, including the city of Lexington. Most of the Kentucky River pools have community water intakes, and the pools that do not are used for drought water storage. The pool behind Lock and Dam 7 provides water for most of the citizens of Mercer County.

Another use of the lock and dam system was developed in the 1920s. In 1927, a hydroelectric plant was added to Lock and Dam 7 (FERC Project No. 539). This plant, originally named the Lock 7 plant, was operated by Kentucky Utilities (KU) from 1928 to 1999, when the plant was no longer operable.

On April 1, 2004, KU filed an “Initial Consultation Document” stating its intent to decommission the Lock 7 plant and surrender the FERC license for the project. The decommissioning plan included removal of the power plant (the plan would have removed only the power plant; the dam would remain for water supply). KU received significant public comment including from environmental groups such as the Kentucky Resources Council, Kentuckians for the Commonwealth, the Kentucky Solar Partnership and Paddlewheel Alliance, all calling for the plant to be rehabilitated and put back in service instead of being torn down.

Upon KU’s notice to decommission the plant, Soft Energy Associates (SEA) began discussion with KU on the purchase of the project with the intent of renovating it. KU and SEA entered into an exclusive agreement that allowed for a due diligence evaluation of the site. SEA was encouraged by the comments that KU received from the public and environmental groups requesting that the plant be renovated by KU or sold to someone else that would save the facility. In December 2004, KU and SEA signed a letter of intent to purchase to plant. SEA created a corporation, Shaker Landing Hydro Associates, Inc. (SLHA) specifically to renovate the plant. To strengthen its proposal to renovate the plant, SLHA formed a 50/50 partnership with Salt River Electric, a rural electric cooperative in Bardstown, Kentucky. This partnership, named Lock 7 Hydro Partners, LLC, purchased the Lock 7 plant from KU in 2005.

The Lock 7 plant is located on land once owned by the Shaker community at Pleasant Hill. Access to the plant by footpath, since there is no road access, is over an easement granted by the restored Shaker community. In recognition of this connection to the Shaker community, the project owner approached the last active Shaker Community at Sabbath Day Lake, Maine, with the idea of renaming the Lock 7 plant after the spiritual leader of the Shakers, Mother Ann Lee. With the concurrence of the Sabbath Day Lake Shakers, the plant was renamed “The Mother Ann Lee Hydroelectric Station.”

The project includes: a concrete substructure, about 116 feet long, with a 36-foot-long solid concrete section and an 80-foot-long hollow dam/spillway, containing trashracks, six intake gates, a forebay about 120 feet long and 100 feet wide, three turbines, and discharge facilities; and a superstructure/powerhouse located above the spillway, supported by hollow concrete piers, with three generating units having a combined installed capacity of 2.209 MW.

The powerhouse is of an unusual design in that it and the generators and electrical equipment are situated on piers. The piers contain shafts that are over 40 feet long that connect the turbines, which are built into the hollow section of the dam, to the powerhouse which is located on top of the piers and elevated well above the river. Even with the powerhouse being situated almost 40 feet above the upper pool of the river, it was flooded in 1978 (the maximum flood of record) leading to subsequent repair work. Each of the three turbines are open flume, fixed blade propeller type turbines. Each turbine is controlled by a Woodward gate-shaft, electro-mechanical governor that actuates the operating ring on the turbine.

The project operates in a run-of-river mode. The flow regimes of the river are not controlled by the project. Float sensors provide back up to the Programmable Logic Controller system used to ensure run-of-river operations at all times.

Waters in the project reach are designated as impaired for dissolved oxygen and mercury. The owner has confirmed with Kentucky Department of Environmental Protection that the project is not the source of the mercury impairment.

PLUS-Standard: The project has developed an adaptive management plan to provide aeration when low dissolved oxygen (DO) levels are detected. The project once operated such that turbines would shut down when low dissolved oxygen levels were detected. However, a new operational protocol allows the turbines to continue to spin during low DO events by drawing air through the crown plate. Additionally, the project conducts DO monitoring year round despite only being required to do so from May-October.

The Kentucky River has not historically had many migratory fish species as dams have been there as early as the late 1800s, and downstream harvesting in estuarine areas on the Ohio River further reduced fish populations. American eels have been spotted on occasion but consultation with the Kentucky Department of Fish and Wildlife Resources and USFWS has confirmed that American eel are not a focus of any management efforts. Upstream passage can be facilitated during high water events, allowing for some passage for riverine fish. Downstream passage is available through spillage flow depending on the inflow volume. The Kentucky River is primarily managed as a warm water fishery.

The project lands are contained entirely within the banks of the Kentucky River and no adjacent lands are owned by the project. No lands of significant ecological value have been identified in the project area due to its very small footprint.

Threatened or endangered species potentially present in the project vicinity include the Indiana bat, gray bat, and Virginia big-eared bat. No management efforts are focused in the project area. Consultation with USFWS confirmed that project operations would not impact listed species.

The project itself is eligible for listing on the National Register of Historic Places. The project owner must consult with the State Historic Preservation Office prior to construction or ground disturbing activities.

PLUS-Standard: The owner has created significant new educational opportunities concerning cultural, historical and STEM-related aspects of the Mother Ann Lee Project. These include offering tours of the powerhouse and presentations about the history of the facility, the founders (Mother Ann Lee and the Shakers,) and renewable energy in general. The project owner initiated a project with a local 4th grade class – Bloom Elementary – to allow students to paint the generators with local fish species and taught the class about renewable energy and the project’s history, effectively transforming the powerhouse into a Children’s Art Gallery. The owner donated an old turbine runner from the powerhouse to the Jessamine County Parks and Recreation Department to display in an adjacent park and plans to add interpretative signage to discuss how the runner was in operation from 1927 – 2014, and how operations of the Kentucky Lock and Dam system impacted settlement in this region of Kentucky.

No recreational opportunities exist at the project. However, the pools created by the dams are used for recreation and tourism. The Lock and Dam 7 pool is used by the Dixie Belle riverboat for tourist excursions to the restored Shaker Community at Pleasant Hill. The pools are also used by recreational boaters and anglers.

PLUS-Standard: The project is currently undergoing improvements to recreational access near the project. Plans include adding/funding enhancements such as canoe portage, fishing piers, and walkways on project lands.

2022: No material changes or compliance issues were identified.  The project remains in compliance based on the annual review, pending issuance of a new FERC license expected in 2022. For Condition 1, the project submitted the 2021 DO monitoring report related to aeration operations.  For Condition 2, the project reported working with the Kentucky River Authority and within relicensing to install a canoe portage and additional parking with new license under a revised recreation management plan.

2021: There were no reported compliance issues. The project remains in compliance based on the annual review.  One change reported was receipt of a new Water Quality Certificate in 2020 as part of its FERC relicensing.   The only change is in extended water quality monitoring to include the month of May. For Condition 1, the project submitted the 2020 DO monitoring report related to aeration operations.  For Condition 2, the project reported no response from the county, but provided a proposed recreation facility design and map developed in consultation with other stakeholders.

January 13, 2017: On December 5, 2016, LIHI Executive Director Shannon Ames issued a Preliminary Certification Decision that the Mother Ann Lee Hydroelectric Project (FERC No. P-539) continues to satisfy the LIHI Certification Criteria. A 30-day appeal period was open through January 5, 2017. No requests for appeal were received. The Mother Ann Lee Hydroelectric Project is now deemed certified by LIHI. The effective date for the Mother Ann Lee project is August 11, 2016 for a ten (10) year term (see below for explanation), which will expire on August 11, 2026.

September 30, 2016: The Low Impact Hydropower Institute has received a complete application for a new term of Low Impact Certification for the Mother Ann Lee Hydroelectric project.  The application materials can be found in the Files section below.

LIHI is seeking public comment on this application.  Specifically, we are interested in knowing whether you think the Mother Ann Lee project continues to meet the LIHI Low Impact Certification Criteria.  Please review the program and criteria in LIHI’s revised Handbook and then review the Project’s 2016 application materials posted on the project page.  Comments that are directly tied to specific LIHI criteria (flows, water quality, fish passage, etc.) will be most helpful, but all comments will be considered.  Comments may be submitted to the Institute by e-mail at comments@lowimpacthydro.org with “Mother Ann Lee Project Comments” in the subject line, or by mail addressed to the Low Impact Hydropower Institute, PO Box 194, Harrington Park, New Jersey 07640.  Comments must be received at the Institute on or before 5 pm Eastern time on November 30, 2016 to be considered.  All comments will be posted to the web site and the applicant will have an opportunity to respond.  Any response will also be posted.

September 9, 2016:  The Mother Ann Lee Hydroelectric project has been granted an extension of the current certificate term. The new expiration date is December 31, 2016. See the extension letter for explanation below.

March 28, 2007: The Mother Ann Lee Project has been certified as low impact for a five year term.

October 11, 2006: Lock 7 Partners LLC has submitted an application for certification of the Mother Ann Lee Project. A public comment period for this application will remain open until December 11, 2006.