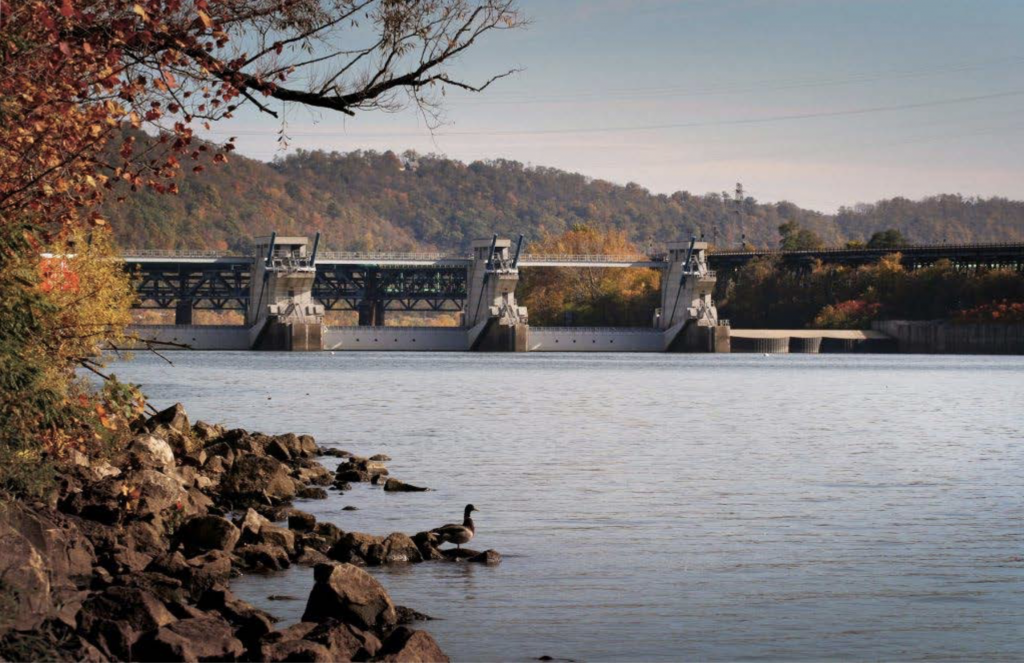 The Braddock Locks and Dam project is located on the Monongahela River, in the Borough of West Mifflin and the City of Duquesne, Pennsylvania. Located at an Army Corps of Engineers (ACOE) dam, the hydropower project is slated to initiate operations in 2026.

The project is situated at the 1,007-foot-long locks and dam which includes:

As currently licensed, the proposed Braddock Hydropower Project would consist of the following new facilities:

The project will operate in run-of-release mode. The addition of hydropower generation at this dam will result in higher flows on the western side of the river. Thus, the project owner has proposed that the ACOE continue to release a minimum of 20% of available flow, up to a maximum flow of 9,440 cfs, through the environmental gate. The balance would pass through the proposed turbines or over the other gates. ACOE has determined that rather than varying flow, it would maintain a minimum flow of 7,250 cfs through the environmental gate.

Waters within the project reach are designated a warm water fishery with a classification of Category 4a due to a fish consumption impairment caused by polychlorinated biphenyls (PCBs). A Category 5 impairment due to pathogen presence is also listed for these waters. These conditions are pre-existing and not caused by the proposed hydropower project.

Historically, two anadromous fish species have inhabited the Monongahela River – skipjack herring and American paddlefish. Though not present at the project, the Pennsylvania Fish and Boat Commission (PFBC) has attempted to reestablish American paddlefish through a stocking program upstream of the project. Passage for migratory and resident species occurs through the lock chambers during scheduled lockages, especially during spring spawning season. At the end of winter and in the spring, the dam gates are raised to allow a free-flowing river during these high flow periods. Resident fish species in the project area include minnow species, gizzard shad, bluegill, channel catfish, common carp, freshwater drum, rock bass, smallmouth bass, spotted bass, and white bass. Select sportfish are stocked by PFBC.

The hydro project lands consist of roughly 1.4 acres. Little to no lands of ecological significance occur in the limited project boundary due to industrial development.

Threatened or endangered species potentially present in the project vicinity include the fanshell, snuffbox, pink mucket, orange-foot pimpleback, clubshell, and sheepnose mussel species. Comprehensive field surveys have not found these species in the project area. Indiana bat and northern long-eared bat both occur in Allegheny County. However, the project construction activities have not been noted by US Fish and Wildlife Service to be of any concern to these species. State listed species include warmouth, eastern sand darter, ghost shiner, and lake sturgeon. Consultation with PA Department of Conservation and Natural Resources concluded that no impact to these species is expected due to project construction.

No known archaeological resources have been identified in the project area. The submerged remains of the Monongahela Navigation Company Lock and Dam No. 2 are located several thousand feet upstream. Other resources are also located nearby but consultation with the PA State Historic Preservation Office concluded that though historic resources have a high probability of existing in the project area, construction activities will have no effects on any sites.

July 28: 2022: The decision to certify the Braddock Locks and Dam Project became final after the close of the appeals period on July 21, 2022 with no appeals filed.  The project is certified for a ten (10) year term that will begin once the project becomes operational. There are four conditions attached to the Certificate, subject to modification pending project changes that may occur during the pre-operational phase.

June 21, 2022:  The Low Impact Hydropower Institute (LIHI) has preliminarily approved Low Impact Certification (pending LIHI #190) for the Braddock Locks and Dam Hydroelectric Project located on the Monongahela River in Pennsylvania. The full application and reviewer’s report are available below.

This decision is preliminary pending the 30-day appeal window. Only those who commented on the initial application during the 60-day comment period are eligible to file an appeal. Such appeal needs to include an explanation as to how the Project does not meet the LIHI criteria. Appeal requests can be submitted by email to comments@lowimpacthydro.org with “Braddock Project” in the subject line, or by mail addressed to the Low Impact Hydropower Institute, 1167 Massachusetts Ave, Office 407, Arlington, MA 02476. All requests will be posted to the website. The applicant will have an opportunity to respond and any response will also be posted. Requests must be received by 5 pm Eastern time on July 21, 2022.

If no appeal requests are received the certification term will start when the project becomes operational.

March 30, 2022: The Low Impact Hydropower Institute has received a complete application for Low Impact Certification of the un-constructed Braddock Locks and Dam Project. LIHI is seeking public comment on this application. Specifically, we are interested in knowing whether you think the Project meets the LIHI Low Impact Certification Criteria, as revised in the 2nd Edition Handbook. Please review the program and criteria in LIHI’s revised Handbook and then review the Project’s application materials below.

Comments that are directly tied to specific LIHI criteria (flows, water quality, fish passage, etc.) will be most helpful, but all comments will be considered. Comments may be submitted to the Institute by e-mail at comments@lowimpacthydro.org with “Braddock Project Comments” in the subject line, or by mail addressed to the Low Impact Hydropower Institute, 1167 Massachusetts Avenue, Arlington, MA 02476. Comments must be received on or before 5 pm Eastern time on May 29, 2022 to be considered. All comments will be posted to the web site and the applicant will have an opportunity to respond. Any response will also be posted.