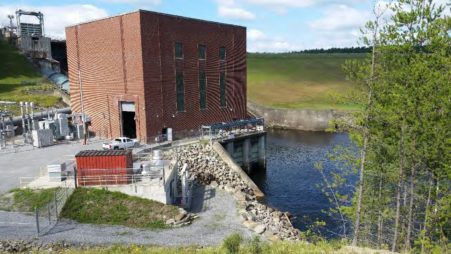 The project works include a 1,646-foot-long by 112-foot-high earthen dam with a concrete gated spillway. The dam impounds a 480-acre reservoir which extend about 3 miles upstream to the tailwaters of the E.J. West project at the Conklingville Dam. Water is conveyed through a 216‐foot‐long steel penstock to the main powerhouse. The penstock creates a short bypassed reach approximately 370 feet long. A 273‐foot‐long penstock connected to the main penstock conveys water to the minimum flow powerhouse which was constructed in 2013. The main powerhouse contains one vertical Francis turbine with a capacity of 30 MW and the minimum flow powerhouse contains one axial flow unit with a capacity of 2.55 MW.

The project operates in a peaking mode with a 1.0‐foot impoundment fluctuation limit. Flow from the reservoir is regulated by the Hudson River Black River Regulating District. A base flow between 300 and 350 cfs is provided year-round based on the elevation of Great Sacandaga Lake located upstream. This base flow is released through the second powerhouse. Great Sacandaga Lake controls 1,044 square miles of the drainage area that contributes to the hydroelectric projects on the Hudson River. A continuous 25-cfs minimum flow is provided into the bypassed reach for downstream fish passage. This flow regime was developed using results from impoundment fluctuation studies conducted by the project owner to determine limits that would not substantially impact aquatic resources in the impoundment. The flow regime was approved by the New York State Department of Environmental Conservation (NYSDEC).

Waters within the project reach are designated as Class C, suitable for fisheries and non-contact recreation. The project river reach is not listed for any impairments and NYSDEC has confirmed that project operations do not adversely impact water quality in the river.

The lower Sacandaga River supports a mix of warm-water and cold-water fish species. No migratory fish species are present in this river reach, though there are reports of a few American eel collected downstream at the Feeder Dam project (LIHI #164) on the Hudson River. The project owner annually contributes to the Fisheries Enhancement Fund which is used for any fishery related projects throughout New York State that meet the following purposes: (1) stream habitat improvement; (2) handicapped fishing access; (3) heritage strain brook trout restoration; or (4) public fishing rights acquisition.

The project lands consist of approximately 682 acres. Most of the land around the impoundment shoreline is undeveloped forestland and the presence of forest overstory on the hillsides around the impoundment generally blocks views of the impoundment from secondary roads around the shoreline. The project owner makes annual financial contributions to the Hudson/Sacandaga River Enhancement Fund which is used for projects, studies, or services related to ecosystem restoration or protection in the area. The project owner also makes annual financial contributions to the Great Sacandaga Lake Enhancement Fund for ecosystem restoration or protection, fish stocking, natural resource stewardship, and new recreation resources.

Threatened or endangered species potentially present in the project vicinity include the Karner blue butterfly, Indiana bat, bald eagle, and pygmy snaketail dragonfly. Consultation with US Fish and Wildlife Service concluded that the Indiana bat may be found in the project vicinity but no critical habitat (caves and mines) for the species is found nearby. The Karner blue butterfly and the blue lupine, the species only known larval food plant, have not been observed in the project area. The project impoundment recreation area is closed during the winter which prevents human access to the upper impoundment, providing protection for bald eagle wintering habitat. No formal recovery plans have been issued by NYSDEC for the pygmy snaketail dragonfly, a state species of concern.

The project area does not house any cultural or historic resources. Prior to construction of the base flow powerhouse, the project owner consulted with the State Historic Preservation Office (SHPO), Bureau of Indian Affairs, and St. Regis Mohawk Tribe to determine if the proposed construction would impact any cultural or historic resources. The SHPO concluded that no sites would be adversely impacted, of which the St. Regis Mohawk Tribe concurred.

Recreational resources at the project include a canoe put-in and take-out and portage trail, a commercial, north side put-in and non-commercial, south side take-out, and a day use area. The Stewarts Bridge Recreation Area is located on the north side of the reservoir and includes a boat ramp, picnic areas, grills, privies. The project owner provides whitewater recreation flows of 4,000 cfs from the powerhouse and gives a minimum two week notice in advance of this release. These pre-scheduled releases occur on Tuesdays – once in June, twice in July, and once in August. Another four releases are scheduled for Saturdays from July 1 through August 31. Public access is provided free of charge where safety and private property do not preclude access.

2022: No material changes were identified.  The project reported a FERC violation of license article 403 related to a planned drawdown that extended 1 day longer than planned.  This is not deemed a significant LIHI compliance issue.  Therefore, the project remains in compliance based on the annual review.

September 17, 2020: The Low Impact Hydropower Institute (LIHI) has preliminarily approved the Stewarts Bridge Project (pending LIHI #171) for a 5-year term of Low Impact Certification. The Project is located on the Sacandaga River in New York.

This decision is preliminary pending the 30-day appeal window. Only those who commented on the initial application during the 60-day comment period are eligible to file an appeal. Such appeal needs to include an explanation as to how the Project does not meet the LIHI criteria. Appeal requests can be submitted by email to comments@lowimpacthydro.org with “Stewarts Bridge Project” in the subject line, or by mail addressed to the Low Impact Hydropower Institute, 329 Massachusetts Ave, Suite 6, Lexington, MA 02420. All requests will be posted to the website. The applicant will have an opportunity to respond and any response will also be posted. Requests must be received by 5 pm Eastern time on October 17, 2020. The full application and reviewer’s report are available below.

If no appeal requests are received and the decision becomes final, the Certification term for the Project will be June 25, 2020 through June 24, 2025.

Comments that are directly tied to specific LIHI criteria (flows, water quality, fish passage, etc.) will be most helpful, but all comments will be considered.  Comments may be submitted to the Institute by e-mail at comments@lowimpacthydro.org with “Stewarts Bridge Project Comments” in the subject line, or by mail addressed to the Low Impact Hydropower Institute, 329 Massachusetts Avenue, Suite 6, Lexington, MA 02420.  Comments must be received on or before 5 pm Eastern time on August 25, 2020 to be considered.  All comments will be posted to the web site and the applicant will have an opportunity to respond.  Any response will also be posted.