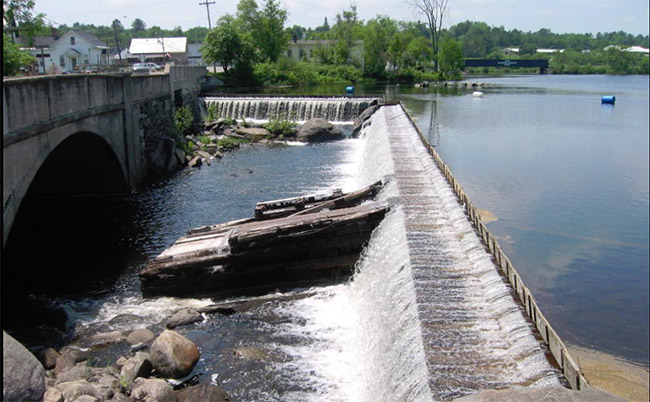 The Milo Project is located on the Sebec River, approximately two river miles upstream of its confluence with the Piscataquis River, in the town of Milo, Piscataquis County, Maine. The original dam was constructed in 1823 and provided power for six mills along the Sebec River including a sawmill, grist mill, spool and excelsior mill, and a woolen mill. In 1920, the Milo Electric Light and Power Company installed two hydroelectric turbines at the site. Many other upgrades occurred over the next decade and a full redesign was made to accommodate run-of-river operations. The current facilities were constructed in 1982 and began service in the same year.

The project includes an 8-foot-high L-shaped spillway topped with 1-foot-high flashboards consisting of two overflow rock filled timber crib spillway sections measuring 50 feet long and 170 feet long respectively. A small spillway concrete section is located at the meeting point of the two spillway sections as well as a power canal separated from the original river channel by an earthen berm. The powerhouse contains three turbine/generating units with a total installed capacity of 0.695 MW. A tailrace channel runs parallel to the original river channel and joins it 750 feet downstream.

The project operates in a run-of-river mode and impounds a 50-acre reservoir. The project provides instantaneous minimum flows that vary by channel: 25 cfs in the east channel (powerhouse tailrace) and 50 cfs in the west channel (bypassed reach channel). The only exception to this requirement occurs when inflow to the dam is less than 75 cfs, and the difference between the 25 cfs flow in the east channel and total inflow is released in the west channel. This flow regime was developed in consultation with the Maine Department of Inland Fisheries and Wildlife (MDIFW) and USFWS.

Waters upstream of the project are designated as Class A. Suitable uses include primary contact recreation and support of aquatic habitat. Below the dam, waters are designated as Class B due to a history of e. coli contamination. This cause of the impairment was likely combined sewer overflow events; project operations do not adversely impact water quality.

Historically, migratory fish species such as American shad, alewife, blueback herring, sea lamprey, shortnose sturgeon, Atlantic sturgeon, and Atlantic salmon made their way up the Sebec River. However, dam construction on the lower Penobscot, Piscataquis, and Sebec rivers blocked these species from migrating to the project. While migration is blocked for these species, MDIFW has noted that the project creates an important barrier to prevent invasive species like northern pike from moving upstream.

Sebec Lake is known as one of Maine’s original landlocked Atlantic salmon waters. Tributaries to Sebec Lake provide important spawning and nursery habitat for the wild landlocked salmon populations here. It could be massively detrimental to that ecosystem if northern pike were to be introduced into the lake. In 2011, the Maine Legislature passed LD 134: An Act to Protect Native Landlocked Salmon Fisheries from Invasive Species. The act specifically prohibits upstream passage measures at the project. This also applies to downstream passage, though high flow events have been known to pass adult landlocked salmon downstream. Other resident fish species include lake trout, white perch, smallmouth bass, northern redbelly dace, pickerel, sunfish, perch, and creek chub, among many others.

The project lands consist of roughly 4 acres. Land use within the project vicinity consists of unpopulated wooded hills and forested uplands used for recreation. Some commercial and residential properties are located nearby. The Town of Milo as authorized by the State implements several restrictions related to development of the shoreline of the Sebec River including a buffer zone extending 250 feet from the high-water mark on lakes and streams. Much of the project area is Inland Waterfowl and Wading Bird Habitat which provides important breeding, feeding, migration, and wintering habitat for these species.

Threatened or endangered species potentially present in the project vicinity include the Northern long-eared bat, little brown bat, Eastern small-footed bat, and Canada lynx. No critical habitats for these species exist in the project reach and it is unlikely that project operations will negatively affect these species due to the project’s developed location. The project has also committed to the USFWS 4(d) rule concerning protection of the Northern long-eared bat, primarily restricting tree cutting in key times of the year.

Historic resources in the project area include the American Mill and Mill Complex on the western shoreline of the bypassed reach. The Maine Historic Preservation Commission (MHPC) noted that the project would have no effect upon any structure or site of historic, architectural, or archaeological significance. The project must consult with MHPC prior to any construction or activities that may affect historic or cultural resources.

The small project area does not include any recreational facilities, but public access is provided free of charge where safe. Several recreation sites exist adjacent to the park and provide recreational resources. Veterans Memorial Park is located along the eastern shoreline upstream of the dam and includes picnic areas, walkways, a gazebo, boat ramp, and docks. Doble Park is located along the western shoreline of the impoundment upstream of the dam.

March 16, 2020: The Low Impact Hydropower Institute has preliminarily approved Low Impact Certification for the Milo Hydroelectric Project located on the Sebec River, approximately two river miles upstream of its confluence with the Piscataquis River, in the town of Milo, Piscataquis County, Maine. This decision is preliminary pending the 30-day appeal window. Only those who commented on the initial application during the 60-day comment period are eligible to file an appeal. Such appeal needs to include an explanation as to how the Project does not meet the LIHI criteria. Appeal requests can be submitted by email to comments@lowimpacthydro.org with “Milo Hydroelectric Project” in the subject line, or by mail addressed to the Low Impact Hydropower Institute, 329 Massachusetts Ave, Suite 6, Lexington, MA 02420. All requests will be posted to the website. The applicant will have an opportunity to respond and any response will also be posted. Requests must be received by 5 pm Eastern time on April 15, 2020. The full application and reviewers report are available below. If no appeal requests are received and the decision becomes final, the Certification term for the Project will be from December 18, 2019 to December 17, 2024.

January 3, 2020: The Low Impact Hydropower Institute has received a complete application for Low Impact Certification of the Milo Hydroelectric Project. LIHI is seeking public comment on this application. Specifically, we are interested in knowing whether you think the Project meets the LIHI Low Impact Certification Criteria, as revised in the 2nd Edition Handbook. Please review the program and criteria in LIHI’s revised Handbook and then review the Project’s application materials below. Comments that are directly tied to specific LIHI criteria (flows, water quality, fish passage, etc.) will be most helpful, but all comments will be considered. Comments may be submitted to the Institute by e-mail at comments@lowimpacthydro.org with “Milo Project Comments” in the subject line, or by mail addressed to the Low Impact Hydropower Institute, 329 Massachusetts Avenue, Suite 6, Lexington, MA 02420. Comments must be received on or before 5 pm Eastern time on March 3, 2020 to be considered. All comments will be posted to the web site and the applicant will have an opportunity to respond. Any response will also be posted.