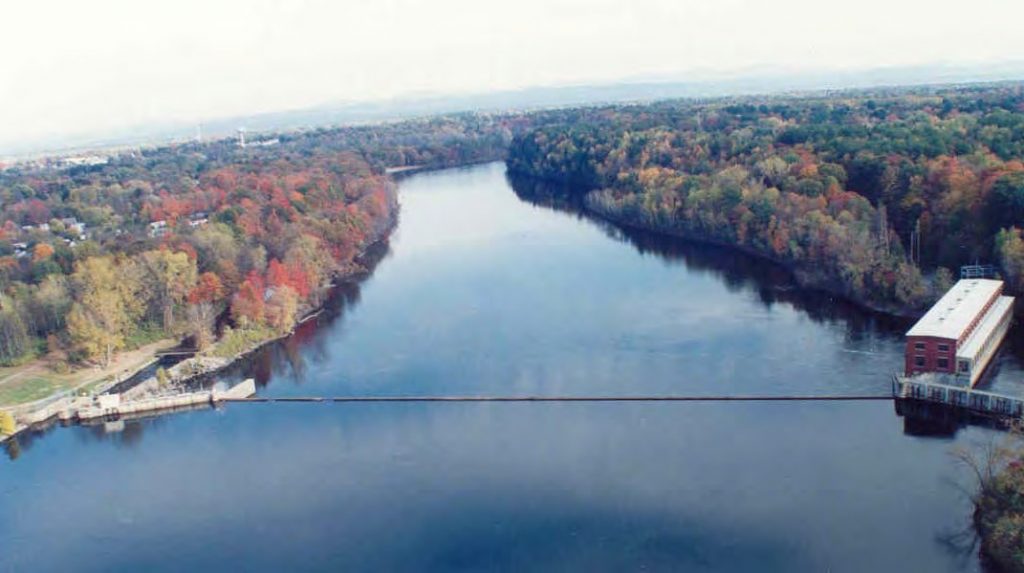 The Feeder Dam Project is located on the Hudson River in Saratoga and Warren Counties, New York. The project was constructed in 1828 and modified for hydroelectric generation in 1924. Four dams lie upstream, including Sherman Island (LIHI #177), and ten dams lie downstream of the project, including Glens Falls (LIHI #172). The project impoundment is managed by the New York State Thruway Authority to ensure water supply to the Feeder Canal which supports navigation in the Champlain Canal between Fort Edward and Lake Champlain. The project is owned by Erie Boulevard Hydropower, LLC (Brookfield Renewable Energy Group).

The dam is 21 feet in height with three-foot flashboards. Water is conveyed from the headwater pond through headgates and into the 250-foot-long forebay, then through a closed flume to the generating units. The powerhouse contains 5 vertical propeller turbines with a total installed capacity of 6 MW. The project operates with a 2.0-foot impoundment fluctuation limit while river flows are within the operating range of the turbines. The impoundment fluctuation limit is reduced to 1 foot from April 1 – June 15 to facilitate fish spawning.

The project operates in a pulsing mode as a reregulating project with a reservoir that comprises roughly 717 acres at normal pool. Impoundment fluctuations are seasonal, limited to 2 feet except between April 1 and June 15 when fluctuations are limited to 1 foot. Minimum average daily flows are 1,760 cfs below the dam and an instantaneous base flow of 1,500 cfs is provided below the dam. This flow regime was developed in consultation with the New York State Department of Environmental Conservation (NYSDEC).

Waters within the project reach are classified as Class B, suitable fish habitat and primary contact recreation. The project waters are also listed as impaired for PCB-contaminated sediments though NYSDEC has confirmed that this impairment is no caused by the project.

The dams upstream and downstream of the project do not have fish passage measures and block access for migratory fish species. American eel have previously been present in the river and have been found to be able to ascend the downstream dams to reach the project, though only two individuals have been spotted (in 1984). Resident fish species include smallmouth bass, yellow perch, pumpkinseed, rock bass, fallfish, killifish, sunfish, tessellated darter, chain pickerel, and black bullhead. Trashrack overlays with 1-inch spacing and continuous 25 cfs discharge reduce the potential for entrainment of resident species.

The project lands consist of 679 acres. The surrounding lands are largely undeveloped with some areas of residential development. The impoundment shoreline has some areas of forested and emergent wetlands.

Threatened or endangered species potentially present in the project vicinity include the Northern long-eared bat, Indiana Bat, Karner blue butterfly, and frosted elfin butterfly. Consultation with the USFWS New York Field Office and NYSDEC’s Natural Heritage Program concluded that the project is not likely to impact the listed species. A survey was conducted for Karner blue butterfly and Frosted Elfin Butterfly but none were observed. No critical habitat for the Indiana bat was discovered in the project area and there is no critical habitat for Northern long-eared bat Transient individuals may be present and the project plans its operations in accordance with the USFWS 4(d) rule for the protection of the Northern long-eared bat. This rule outlines provisions related to preserving forest habitat for the species, especially in regard to tree clearing from June 1 through July 31.

Historic structures within the project reach include the dam, powerhouse, and Feeder Canal. The project operates under a cultural resource management plan developed in consultation with the State Historic Preservation Office. The plan contains provisions to ensure proper stewardship of the historic resources at the project.

Recreation facilities at the project include a canoe put in below Feeder Dam, 16 parking spaces for access to Feeder Canal, tailrace fishing access parking, two picnic tables at Overlook Park, a car-top boat launch, and a canoe portage and take-out. Public access is provided free of charge where safety and private property do not preclude access.

This decision is preliminary pending the 30-day appeal window. Only those who commented on the initial application during the 60-day comment period are eligible to file an appeal. Such appeal needs to include an explanation as to how the Project does not meet the LIHI criteria. Appeal requests can be submitted by email to comments@lowimpacthydro.org with “Feeder Dam Hydroelectric Project” in the subject line, or by mail addressed to the Low Impact Hydropower Institute, 329 Massachusetts Ave, Suite 6, Lexington, MA 02420. All requests will be posted to the website.  The applicant will have an opportunity to respond and any response will also be posted. Requests must be received by 5 pm Eastern time on October 12, 2019.  The full application and reviewers report are available below.

If no appeal requests are received and the decision becomes final, the Certification term for the Project (pending LIHI #164) will be June 11, 2019 for a term of eight (8) years, which will expire on June 10, 2027.

June 12, 2019: The Low Impact Hydropower Institute has received a complete application for Low Impact Certification of the Feeder Dam Hydroelectric Project.  LIHI is seeking public comment on this application.  Specifically, we are interested in knowing whether you think the Project meets the LIHI Low Impact Certification Criteria, as revised in the 2nd Edition Handbook.  Please review the program and criteria in LIHI’s revised Handbook and then review the Project’s application materials below.

Comments that are directly tied to specific LIHI criteria (flows, water quality, fish passage, etc.) will be most helpful, but all comments will be considered.  Comments may be submitted to the Institute by e-mail at comments@lowimpacthydro.org with “Feeder Dam Project Comments” in the subject line, or by mail addressed to the Low Impact Hydropower Institute, 329 Massachusetts Avenue, Suite 6, Lexington, MA 02420.  Comments must be received on or before 5 pm Eastern time on August 11, 2019 to be considered.  All comments will be posted to the web site and the applicant will have an opportunity to respond.  Any response will also be posted.