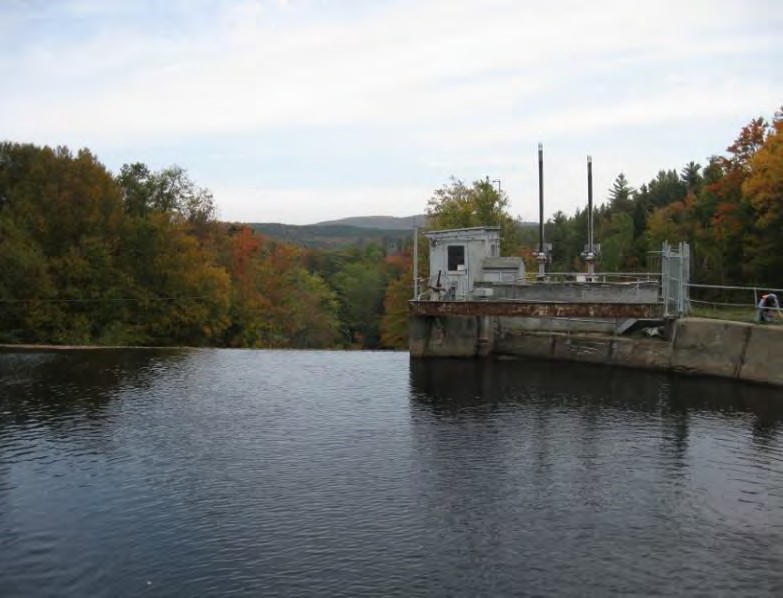 The Chasm Project is located on the Salmon River near the Town of Malone in Franklin County, New York and is the fourth hydroelectric project upstream from the mouth of the river. From its headwaters in the Adirondack Mountains, the Salmon River flows approximately 50 miles northwest to its confluence with the St. Lawrence River near Dundee, Quebec. The project was originally constructed in 1913 for the sole purpose of energy production. Improvements were made from 1938 to 1997 including installation of steel pipeline saddles, replacement of the steel pipeline, and spillway stabilization. Further improvements were made to the powerhouse including installing a tailrace retaining wall, several new turbines, and civil works updates for installation of a new substation. There are several other dams on the Salmon River including the Mountain View Project upstream, and Macomb Project (LIHI #159), Ballard Mill, and Whittelsey Project all located downstream.

The Chasm Falls dam is a 202-foot-long and 32-foot-high concrete gravity-type dam that includes a 100-foot-long spillway section. A steel pipeline 3,355 feet long (begins at 99 foot long, 8 foot diameter steel pipeline reduces to 2,038 foot long, 7 foot diameter, which reduces to 1,243 foot, 6 foot diameter) convey water from the impoundment to the powerhouse. The penstock is above ground for the first 100+ feet downstream of the intake, then buried thereafter. The powerhouse contains three Francis turbine units with a total installed capacity of 3.35 MW. The tailrace is 850 feet long and about 20 feet wide. The project creates a 4,800-foot-long bypassed reach. Approximately 500 feet downstream from the confluence of the bypassed reach and the tailrace is the Chasm Falls Recreation Area, a seasonal day use area owned and maintained by the project owner. There is also an informal bypassed reach access area near the powerhouse.

The project is operated in run-of-river mode and impounds a 22-acre reservoir. The project provides minimum flows seasonally: 15 cfs from May 1 through October 1 and 23 cfs from October 2 through April 30. Project drawdown is limited to 0.25 ft from the crest of the dam when river flows exceed 85 cfs. When flows are less than 85 cfs, project drawdown is limited to 0.1 feet measured from the crest of the dam to support downstream habitat areas. The project also provides a base flow of 70 cfs, or project inflow if less, through releases from the powerhouse and minimum flow taps. This flow regime was recommended by USFWS and the New York State Department of Environmental Conservation (NYSDEC).

Waters in the project reach are designated Class C, managed for aquatic habitat, fishing, and primary/secondary contact recreation where appropriate. The project operates under a sediment management plan which includes measures to minimize the potential for sediment releases that could impact habitat and populations downstream.

The project lands consist of roughly 40 acres. The surrounding lands include primarily scattered residences, private recreation areas, summer camps, and forest land managed for forest production and recreation. The Titusville Mountain State Forest is located adjacent to the project impoundment. Consultation with the NYSDEC Natural Heritage Program indicates no lands of significant ecological value exist in the project area or vicinity. The reduced drawdown fluctuations at the project help to protect wetland, riparian, and littoral habitat and minimize erosion in the project vicinity. The project also operates under an invasive species management plan with provisions for vegetation management, construction operations, and inspection and removal or aquatic invasives that may adhere to the project’s boats and trailers.

Threatened or endangered species potentially present in the project vicinity include the Northern long-eared bat. There are no critical habitats for the species and the project complies with the USFWS 4(d) rule concerning the protection of northern long-eared bat. The rule restricts tree clearing from June 1 to July 31 to protect potential habitat for transient individuals.

Historic properties in the project area include the Adirondack Pulp Mill Site located along the project’s bypassed reach. The site consists of the remnants of a former sawmill that was later converted to a pulp mill. A historic properties management plan was developed for the project in consultation with the State Historic Preservation Office, the National Park Service, and the St. Regis Mohawk Tribe. This plan includes provisions to ensure the proper stewardship of historic and cultural resources in the project vicinity.

Recreational resources in the project area include the Chasm Falls recreation area with parking and river access trail, designated fishing area, as well as picnic tables and angler/boater access in the upstream William A. King Memorial Park. Public access is provided free of charge.

September 4, 2019: The decision to certify the Chasm Hydroelectric Project is final. No appeals were received during the appeal period which closed on August 22, 2019. The certification term for the Project is from April 26, 2019 through April 25, 2024.

This decision is preliminary pending the 30-day appeal window. Only those who commented on the initial application during the 60-day comment period are eligible to file an appeal. Such appeal needs to include an explanation as to how the Project does not meet the LIHI criteria. Appeal requests can be submitted by email to comments@lowimpacthydro.org with “Chasm Hydroelectric Project” in the subject line, or by mail addressed to the Low Impact Hydropower Institute, 329 Massachusetts Ave, Suite 6, Lexington, MA 02420. All requests will be posted to the website.  The applicant will have an opportunity to respond and any response will also be posted. Requests must be received by 5 pm Eastern time on August 22, 2019.  The full application and reviewers report are available below.

If no appeal requests are received and the decision becomes final, the Certification term for the Project (pending LIHI #158) will be April 26, 2019 for a term of five (5) years, which will expire on April 25, 2024.

April 30, 2019: The Low Impact Hydropower Institute has received a complete application for Low Impact Certification of the Chasm Hydroelectric Project.  LIHI is seeking public comment on this application.  Specifically, we are interested in knowing whether you think the Project meets the LIHI Low Impact Certification Criteria, as revised in the 2nd Edition Handbook.  Please review the program and criteria in LIHI’s revised Handbook and then review the Project’s application materials below.

Comments that are directly tied to specific LIHI criteria (flows, water quality, fish passage, etc.) will be most helpful, but all comments will be considered.  Comments may be submitted to the Institute by e-mail at comments@lowimpacthydro.org with “Chasm Project Comments” in the subject line, or by mail addressed to the Low Impact Hydropower Institute, 329 Massachusetts Avenue, Suite 6, Lexington, MA 02420.  Comments must be received on or before 5 pm Eastern time on June 29, 2019 to be considered.  All comments will be posted to the web site and the applicant will have an opportunity to respond.  Any response will also be posted.