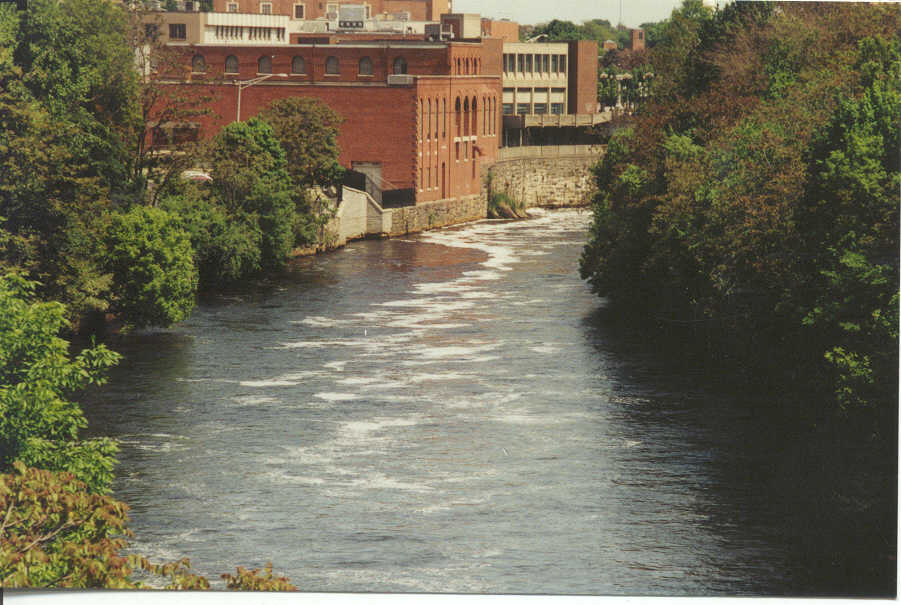 The Pawtucket Project is located at a natural cascade at the mouth of the Blackstone River in Pawtucket, Rhode Island. The Blackstone River, which originates in Massachusetts and crosses into Rhode Island, drains a watershed of 475 square miles that includes both highly urbanized and historically industrialized areas, such as the city of Pawtucket, and large undeveloped areas. The river is characterized by numerous dams and channelization for transportation, urban development, and flood control. The original dam at Pawtucket Falls is thought to have first been constructed in the early 1700s. The hydroelectric project was commissioned in 1989.

The dam is made of brick and timber, about 200 feet long and 4 feet high, constructed at the top of waterfalls about 13 feet high. Water enters the system through the intake structure located on the river right side of the dam. From there, water is conveyed through an underground, open channel and brick-lined tunnel conveyance system to the forebay (about 180 feet in length). The forebay is located within the powerhouse and includes a trashrack and head gate system with an automatic trash rake. The trashrack clear spacing is 2.25 inches. From the forebay, water is conveyed into two penstocks approximately 130 feet in length to deliver water to each of the two turbines. After passing through the turbines, water discharges back into the Blackstone River by way of a subsurface tailrace about 90 feet long and 45 feet wide. The powerhouse building includes 2 levels. The upper level houses the electrical equipment while the lower houses the two turbines and generators. The project operates two Kaplan turbines with a combined capacity of 1.6 MW.

The project operates in a run-of-river mode and impounds a one-acre reservoir. The project provides a minimum flow of 50 cfs in the approximate 420-foot long bypassed reach to protect the downstream reach of the river. This flow regime was developed in consultation with USFWS, the US Environmental Protection Agency, and the Rhode Island Department of Environmental Management (RIDEM). The flow regime reflects the tidal nature of the waters downstream of the project.

Waters within the project reach are designated as not supporting of fish and wildlife habitat, and fish consumption due to mercury and PCB contamination, and primary or secondary contact recreation due to fecal coliform contamination. Consultation with RIDEM confirmed that the project is not adversely impacting water quality and is non-contributory to the river impairments.

The Main Street Dam (project dam) is located on a natural falls that has historically blocked upstream passage for migratory species except American eel. The project owner is currently engaging in collaborative efforts with the Rhode Island Natural Resources Conservation Service, RIDEM, US Army Corps of Engineers, and other organizations representing several dams upstream of the project to develop plans for fish passage facility installation. This is a complicated issue due to the historic significance of the dams on the Blackstone, effectiveness of passage, and the significant cost involved in providing access to limited habitat. Resident river species in the Blackstone River include blacknose dace, common shiner, fallfish, longnose dace, tessellated darter, yellow bullhead, smallmouth and largemouth bass, pumpkinseed, and yellow perch. The project trashracks mitigate the potential for entrainment. The downstream reach of the project is tidally influenced and hosts several species including silversides, mummichogs, killifish, menhaden, tautog, winter flounder, scup, white perch, and bluegill.

The project lands consist of less than half an acre and are located in a highly developed urban area with a very small footprint; thus, no lands of significant ecological value exist in the project area.

Threatened or endangered species potentially present in the project vicinity include the northern long-eared bat. No critical habitat for the species exists in the project area. The USFWS 4(d) rule concerning protection of the bat restricts tree cutting within ¼ mile of potential hibernacula, especially from June 1 – July 31. The project does not require any vegetation management that may impact the species.

The Blackstone River Valley of Massachusetts and Rhode Island is the birthplace of the American Industrial Revolution. The first cotton mill in the United States was commissioned in about 1793 at Slater Mill (immediately upstream of the Main Street dam) and the success at Slater Mill inspired other entrepreneurs to build more mills first in the Blackstone Valley and eventually throughout New England. The Pawtucket Main Street dam is a contributing resource in the Old Slater Mill Historic Site National Historic Landmark District, and the powerhouse which was built in 1894 (Bridge Mill Power Plant) is individually listed on the National Register of Historic Places. The current Main Street Dam was reportedly constructed in 1894. The project owner consulted with the State Historic Preservation Office (SHPO) to identify project impacts on cultural resources and the SHPO concluded that the continued operation of the project will not have any adverse impact on the resources nearby.

Recreational resources are not present at the project due to the small size of the impoundment and the highly developed nature of the area. The riverbanks are vertical walls, and no safe access is available near the project infrastructure. The upstream Slater Mill Dam has an interpretive museum as well as a paved walkway allowing opportunities to see the Slater Mill Dam and the project reservoir.

2022: No material changes or compliance issues were identified. The project remains in compliance based on the annual review. Several hydro projects upstream have received new licenses since 2021, several with American eel passage requirements; however, the project reported no change in Condition 1.

2021: There were no reported changes or compliance issues. The project remains in compliance based on the annual review. For Condition 1, the project reported that in 2019, NRCS engaged a technical consultant to re-evaluate alternative approaches to provide fish passage at the Main Street and Slater Mill Dams using available funding. The 2019 re-evaluation attempted to address fish passage considering a variety of site constraints. Initial reporting by the technical consultant indicated that the cost for implementing fish passage at the two lower most barriers would range from a low of $8-20MM, depending on the alternative. Based on the consultant’s analysis there are trade-offs associated with each alternative relative to: ability to achieve/contribute to watershed restoration goals, cost (construction and operation), effectiveness, and permitting. Pawtucket Hydropower continues to actively collaborate with the fish passage partners on the on-going re-evaluation and planning/implementing subsequent next steps.

This decision is preliminary pending the 30-day appeal window. Only those who commented on the initial application during the 60-day comment period are eligible to file an appeal. Such appeal needs to include an explanation as to how the Project does not meet the LIHI criteria. Appeal requests can be submitted by email to comments@lowimpacthydro.org with “Pawtucket Project” in the subject line, or by mail addressed to the Low Impact Hydropower Institute, 329 Massachusetts Ave, Suite 6, Lexington, MA 02420. All requests will be posted to the website. The applicant will have an opportunity to respond and any response will also be posted. Requests must be received by 5 pm Eastern time on July 24, 2020. The full application and reviewer’s report are available below.

If no appeal requests are received and the decision becomes final, the Certification term for the Project will be April 23, 2019 through April 22, 2024.

April 8, 2020: The Low Impact Hydropower Institute has received a complete application for Low Impact recertification of the Pawtucket Hydroelectric Project.  The Project’s application materials can be found below.

LIHI is seeking public comment on this application.  Comments that are directly tied to specific LIHI criteria (flows, water quality, fish passage, etc.) will be most helpful, but all comments will be considered.  Comments may be submitted to the Institute by e-mail at comments@lowimpacthydro.org with “Pawtucket Project Comments” in the subject line, or by mail addressed to the Low Impact Hydropower Institute, 329 Massachusetts Avenue, Suite 6, Lexington, MA 02420.  Comments must be received on or before 5 pm Eastern time on June 7, 2020 to be considered.  All comments will be posted to the web site and the applicant will have an opportunity to respond.  Any response will also be posted.

June 30, 2014: Executive Director Michael J. Sale has extended the current certificate term for the Pawtucket Project to July 31, 2014 to allow time for completion of the review of the application for a third term of certification.

May 28, 2014: The Low Impact Hydropower Institute has received a comment letter from The Blackstone River Watershed Council regarding the recertification of the Pawtucket Project. The letter can be read in full in the “Files” section below.

April 28, 2014: The Pawtucket Project has been acquired by Gravity Renewables, Inc.

April 9, 2014: The Low Impact Hydropower Institute has received an application for a third term of certification of the Pawtucket Project. The current certificate term is scheduled to expire on April 23, 2014, but the Institute is extending the term to June 30, 2014, in order to allow for a period of public comment on the application.

The application materials are located in the “Files” section below.

June 11, 2009: LIHI received a brief response from Pawtucket Hydropower LLC to Cohen’s comments; it can be found in the Files section below.

June 11, 2009: LIHI received a comment email from Russ Cohen of the Massachusetts Riverways Program, Massachusetts Department of Fish and Game. A link to his comments in PDF form can be found in the “Files” section below.

April 10, 2009: Pawtucket Hydropower LLC has filed an application to recertify the Pawtucket Hydroelectric Project. The current certificate term is set to expire on April 23, 2009. A public comment period will remain open until June 13, 2009.