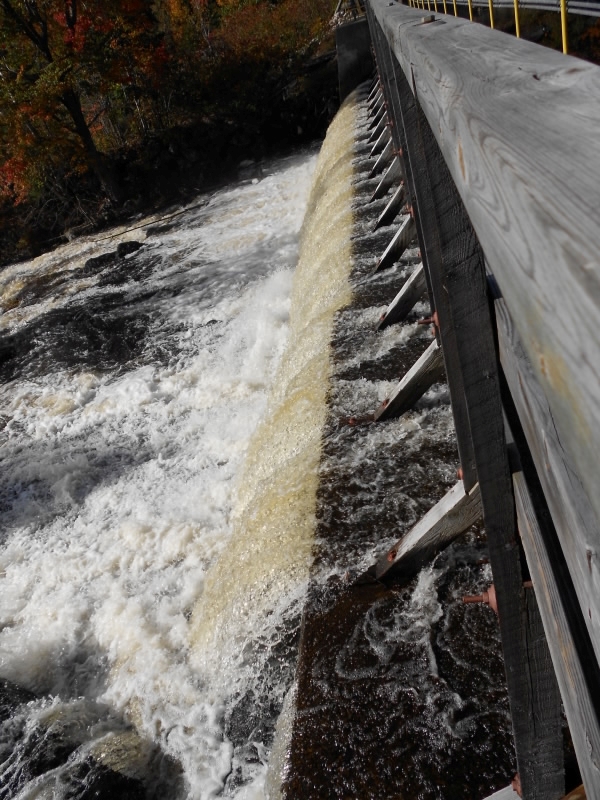 The South Milton Project is located on the Salmon Falls River in the town of Milton, New Hampshire on the border with Lebanon, Maine. The Salmon Falls River originates at Great East Lake about twelve miles due north of the Project site. The river flows principally southeast from the Project site to join the Cochecho River, which flows in from the west in the City of Dover, New Hampshire. Except for the dam, all project infrastructure is located in New Hampshire.

The Project is one of fifteen dams located on the Salmon Falls River. Six federally licensed or exempted hydroelectric projects are located between the Project and South Berwick, Maine. Below South Berwick, the river once joined with the Cochecho River becomes tidal for its last three miles before entering the Piscataqua River.

The mills on the upper Salmon Falls River were initially developed in the early 1900’s by Jonas Spaulding, a partner in Spaulding Fiber, a manufacturer of leatherboard, transformer board, and vulcanized fiber founded in 1873 in Townsend Harbor, Massachusetts. The New Hampshire mills were operated for leatherboard manufacture under the name ‘J. Spaulding and Sons.’ Dams related to this manufacturing enterprise persist to this day.
The project includes: a timber crib dam, penstock, powerhouse, three turbines, and wastegates.

The dam is a 164-foot-long concrete-capped timber crib structure which is 16.4 feet high at its highest point. The steel penstock measures 6.5 feet in diameter and is 3,800 feet long. The powerhouse is located in the former Spaulding Fiber Company Mill 4,600 feet downstream of the dam and houses three turbines, with Units 1, 2, and 4 located in Mill Building No. 1 and Unit 3 located in adjacent Mill Building No. 2. The project’s total installed capacity is 1.55 MW. Mill building No. 1 is considered the primary powerhouse with the controls and electrical cubicles situated within. Each of the generating units has individual draft tubes which discharge flow into a common tailrace.

The dam was completed in 1893. The upper six feet of the dam consists of stanchion stoplogs. Two 10.5-foot-wide by 6.5-foot-high wooden motorized wastegates were incorporated in the structure in 1999. The intake structure is comprised of a trashrack, a custom-built trash rake system, a manually operated headgate, and a transition section which feeds the penstock. The trashrack rake system is operated manually on a daily basis and more frequently during specific times of the year such as during the fall and during ice break-up periods.

The project operates in a run-of-river mode and impounds a 100-acre reservoir. The project provides a 58 cfs minimum flow into the 0.87-mile-long bypass reach. This flow regime was developed in consultation with US Fish and Wildlife Service and New Hampshire Department of Fish and Game (NHFG).

Waters within the project reach were sampled in 2016 as requested by the New Hampshire Department of Environmental Services (NHDES). NHDES concluded that the project was meeting the water quality criteria for dissolved oxygen, phosphorus, and chlorophyll-a. The Salmon Falls River is not Section 303(d) listed in the project reach.

The Salmon Falls River historically supported migratory fish, but passage has since been precluded by multiple downstream dams. The project is not required to provide passage for migratory or riverine fish. In 2015, the project owner finished installing permanent passage facilities for American eel for both upstream and downstream migration. Effectiveness monitoring is currently being undertaken in consultation with NHFG, USFWS, and Maine Department of Marine Resources.

The project lands consist of roughly 100 acres. The riparian area associated with the project is heavily forested and assist in protection of the shoreline as well as aquatic biota, wildlife, and water quality.

Threatened or endangered species potentially present in the project vicinity include the Northern long-eared bat and small whorled pogonia. The primary concern for Northern long-eared bat is disturbance of critical habitat. This bat species is found all over New England and roosts in trees during the summer. The project does not plan to perform tree-cutting activities. The small-whorled pogonia is unlikely to be located with areas affected by project operations or maintenance activities as it is typically found in upland hardwood forest understory.

While the project is not currently eligible for listing on the National Register of Historic Places, the project has a rich history associated with mill development. In consultation with the New Hampshire Division of Historical Resources, the site may become eligible at a future date which would then necessitate architectural inventory. The project was purchased by the current owner in 2000 and no changes to the site that would alter or adversely affect cultural or historic resources have been made. The project owner must consult with the State Historic Preservation Office prior to conducting any activities that may have such an effect.

Recreational resources at the project include informal fishing access. The project lands are open to the public free of charge where safe.

March 13, 2018:  On March 11, 2018, the 30-day appeal window for the preliminary decision to recertify the South Milton Hydroelectric Project ended with no appeals filed. The recertification decision is therefore final.

The term of Low Impact Certification for the South Milton Hydroelectric Project is from September 6, 2017 until September 5, 2022.

As provided for in the LIHI 2nd Edition Certification Handbook, the Preliminary Decision, along with the Application Reviewer’s report and (if prepared) report of the Executive Director, will be posted on the Institute’s web page for 30 days during which time those who provided comments during the application’s 60-day public comment period can appeal the decision. Any appeal must include specific reasons why the appellant believes the hydropower facility does not meet one or more criteria. Appeal requests can be submitted by email to comments@lowimpacthydro.org with “South Milton Hydroelectric Project” in the subject line, or by mail addressed to the Low Impact Hydropower Institute, 329 Massachusetts Ave, Suite 2, Lexington, MA 02420. All requests will be posted to the website and the applicant will have an opportunity to respond. Any response will also be posted. Requests must be received by 5 pm Eastern time on March 11, 2018.

If no appeal requests are received and the decision becomes final, the new term for the South Milton Project will be September 6, 2017 through September 5, 2022.

LIHI is seeking public comment on this application. Specifically, we are interested in knowing whether you think the South Milton project meets the LIHI Low Impact Certification Criteria. The South Milton application is subject to review using the Criteria in the LIHI Certification Handbook of 2016.  Please review the program and criteria in LIHI’s 2016 Handbook and then review the Project’s 2017 application materials posted below. Comments that are directly tied to specific LIHI criteria (flows, water quality, fish passage, etc.) will be most helpful, but all comments will be considered. Comments may be submitted to the Institute by e-mail at comments@lowimpacthydro.org with “South Milton Project Comments” in the subject line, or by mail addressed to the Low Impact Hydropower Institute, 329 Massachusetts Ave, Suite 2, Lexington, MA 02420. The 60 day public comment period begins on October 26, 2017.  Comments must be received at the Institute on or before 5 pm Eastern time on December 26, 2017 to be considered. All comments will be posted to the web site and the applicant will have an opportunity to respond.  Any response will also be posted.

January 30, 2013: The South Milton Hydroelectric Project has been certified as low impact for a five year term, effective September 6, 2012 and expiring September 6, 2017, with the following conditions:

September 30, 2012: The public comment period on the application has closed.

July 30, 2012: SFR Hydro, Inc. has submitted an application for the certification of its South Milton Project. The application was posted and the public comment period was opened.