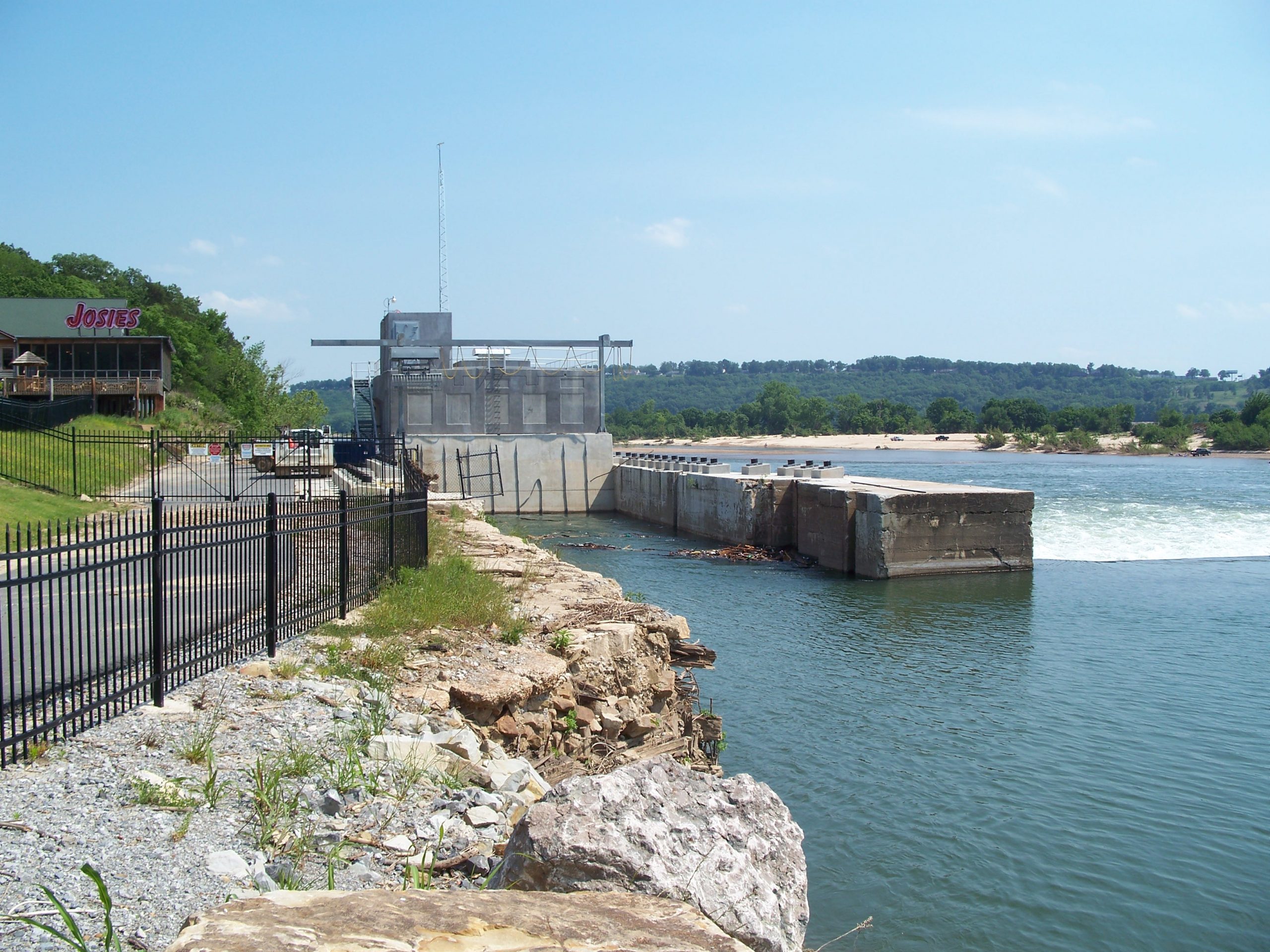 White River Lock and Dam No. 1, Lock and Dam No. 2, and the “Shelby M. Knight” Lock and Dam No. 3 Hydroelectric Projects (LD1, LD2, LD3) collectively known as the “White River Hydroelectric Project”, are located on the White River in north central Arkansas. The Projects are located at existing and no longer used US Army Corps of Engineers (USACE) locks and dams on the 722-mile-long White River. The river begins in northwestern Arkansas in the Boston Mountains and flows east toward Fayetteville where it then turns north. The river enters Missouri near Eureka Springs. It then flows southeast back into Arkansas past Bull Shoals, Mountain Home, and Calico Rock. At Batesville, the second section of the river, known as the Lower White, begins. From Batesville, the river flows south for 295 miles through Arkansas’s Delta region before emptying into the Mississippi River. The river passes multiple lakes created by eight USACE dams. Six lakes are operated together as a system to reduce the frequency and severity of floods.

Between 1900 and 1908, USACE built the three timber-crib and concrete dams and locks associated with the projects. The locks were used for navigation, moving boats containing shipments of timber, cotton, and mining products such as limestone and silica. By the mid-1950s, trains had replaced boats as the primary method for transporting these products. USACE decommissioned the locks and sold the properties. Development of the new hydropower capacity involved a utility, a college, a city, a county, the U.S. Congress, 27 years, a myriad of engineers and lawyers, and lots of tenacity and perseverance by a dedicated group of individuals. Project construction began in 2003 and the projects came online in 2006-2007. LD1 is the most downstream of the three projects, located in Batesville, AR in Independence County at river mile 299.2.

LD1 consists of a 660-foot-long, 27.6-foot-high dam that creates an impoundment with a surface area of 773 acres. The powerhouse contains a single vertical Kaplan turbine and generating unit with a capacity of 4.3 MW and a design flow of 3,180 cubic feet per second (cfs) and estimated annual generation of 17,200 MWh.

An open-flume tailrace conveys water back to the river about 280 feet downstream of the dam. The Project boundary encompasses the high-water mark and about 25 acres of land around Project structures.

The project is operated in an instantaneous run-of-river mode. Inflows for LD1, LD2 and LD3 are dependent on the outflow from the upstream USACE dams at Bull Shoals on the White River and from Norfolk Lake on the North Fork River along with other tributaries. There are no spillway gates at any of the dams. Plant flow capacities are low in comparison to river flow and impoundment levels rarely drop to or below the tops of the spillways. Run-of-river operation and flows are monitored based on the USGS gage along the White River at Batesville, AR.

Waters in the reach of the three facilities are listed as supportive of fish and wildlife propagation, primary and secondary contact recreation, and domestic, agricultural, and industrial water supply uses. Water quality monitoring was conducted from 2014-2019 to ensure that the facilities were not adversely impacting dissolved oxygen and water temperature in the project reach.

The original construction of the lock and dam facilities included fish passage ladders or fishways. However, only remnants of these facilities currently remain. High flows and flooding in the project area would certainly destroy any attempt to provide permanent fish passage at the projects. Arkansas Game and Fish Commission (AGFC) and the project owner have been in contact to discuss the potential for seasonal fish passage structures though no formal recommendations or prescriptions have been provided. Resident fish species include rainbow and cutthroat trout, (stocked annually in the Bull Shoals Lake) crappie, black bass, white bass, catfish, brook trout, shad, and walleye. Trout are not native to Arkansas, but the fisheries have been noted to be a result of the cold water discharge from the USACE dams along the White River.

The project lands consist of roughly 25 acres. The property surrounding LD1 is mostly urbanized and industrial. An Erosion and Sedimentation Control Plan, Wildlife/Vegetation Management Plan and Wetland/Floodplain Management Plan, and Raptor Protection Plan were all implemented at the projects. The plans were reviewed by US Fish and Wildlife Service, (USFWS) and AGFC with no comments.

Threatened and endangered species potentially present in the project area include Northern long-eared bat, Indiana bat, gray bat, Eastern black rail, piping plover, red knot, Ozark hellbender, Missouri bladderpod, and running buffalo clover. No critical habitats for these species are present in the project area. Several mussel and clam species have been historically noted in the area of LD1. Surveys for the species were conducted but none were noted. USFWS reviewed the findings and noted that no impact would be had on the species.

The locks and dams were determined to be eligible for listing on the National Register of Historic Places and construction of the hydroelectric stations required removal of portions of the existing lock and dam structures. At that time, the Arkansas State Historic Preservation Officer (SHPO) noted this would constitute an adverse impact on the eligible properties and recommended documentation of the projects prior to demolition. LD1 required coordination with the Arkansas SHPO to record all or part of the Lock and Dam No. 1, construct a scale model as it was originally constructed and produce a film on display for visual interpretation of the historical operation. The project owner complied and produced such materials for the historical record.

Recreational resources at the project include public boat ramps upstream and downstream of the dam (developed and maintained by AGFC) with available parking and access to fishing. Small City parks are located on both banks adjacent to the dam with playgrounds, picnic areas, and fishing. Public fishing access is available at the lock wall. Public access is provided free of charge.

2021:  Annual reporting for the current Certificate has not yet taken effect.

August 3, 2021: The Low Impact Hydropower Institute has issued a final decision on the certification of the White River Lock and Dam No. 1 Project located on the White River in Arkansas. The 30-day appeal window closed on July 31, 2021 and no appeals were filed. Therefore, the decision to certify the project is now final. The new term is June 9, 2021 through June 8, 2026.

July 1, 2021: The Low Impact Hydropower Institute (LIHI) has preliminarily approved Low Impact Certification (pending LIHI #179, #180, #181) for the White River Lock and Dam No. 1, No. 2 and No. 3 Hydroelectric Projects located on the White River in Arkansas.

This decision is preliminary pending the 30-day appeal window. Only those who commented on the initial application during the 60-day comment period are eligible to file an appeal. Such appeal needs to include an explanation as to how the Project does not meet the LIHI criteria. Appeal requests can be submitted by email to comments@lowimpacthydro.org with “White River Project” in the subject line, or by mail addressed to the Low Impact Hydropower Institute, 1167 Massachusetts Ave, Arlington MA 02476. All requests will be posted to the website. The applicant will have an opportunity to respond and any response will also be posted. Requests must be received by 5 pm Eastern time on July 31, 2021.

The full application and review report are available below. If no appeal requests are received the certification terms for each project will be June 9, 2021 – June 8, 2026 unless extended per Condition 2.