The Low Impact Hydropower Institute (LIHI) is recommending a new approach to LIHI Certificate recertifications. The new process will be based on events that would trigger a full or partial review, regardless of the number of years since the original certification. LIHI would like to hear from stakeholders on this proposal, which if adopted, would go into effect on January 1, 2022.

Comments should be sent via email to comments@lowimpacthydro.org with “Recertification Proposal Comments” in the subject line. Please include your name, organization and contact information in case we have any follow up or clarifying questions. Comments will be due January 27, 2021.

The original LIHI Criteria for certification were published in 2000. In 2016, LIHI published a comprehensive update to the Certification Handbook which included substantial changes to the standards used to meet the LIHI Criteria. The update also changed “recommended for dam removal” from a criterion to an eligibility requirement and made upstream and downstream fish passage separate criteria. In addition, the update introduced the concept of zones of effect, requiring a comprehensive review of the criteria for each different area of impact.

Because of the comprehensive changes to the Handbook, each active LIHI Certificate was required to go through a two-stage recertification process under the new Handbook. All active LIHI Certificates will be finished with that process by the end of 2023. In 2019, LIHI began a discussion with a focused number of stakeholders (certificate holders and conservation organizations and agencies) to discuss the benefits and drawbacks of the current approach. After many discussions together, review of stakeholder problem statements, financial analysis, and board review, LIHI staff developed the proposed approach.

Under the proposal, described in detail below, full recertification reviews would be required under a limited number of circumstances such as receiving a new FERC license. Partial reviews would be required only when an event listed on the flow chart (shown below) was triggered. These include changes to the facility or its operations, a new watershed management plan that is applicable to the facility and the LIHI Criteria, an event considered a non-compliance event by regulatory authorities, or new formal resource agency recommendations. Changes to the Handbook that occurred since the last Certification would only apply at the time of the review. Significant Handbook changes would not in themselves be a triggering event. The proposal has the following benefits:

LIHI proposes that a full or partial review of a LIHI Certificate be conducted according to the flow chart below. If no trigger has been activated, the Certificate would remain in good standing for another year. Certificate holders would be required to submit more in-depth annual compliance reports which, at a minimum, would require an answer to whether each trigger has or has not been met. LIHI will review the compliance report, information provided by the Certificate holder, plus its own independent research, and determine whether a trigger has been met. If so, LIHI will inform the Certificate holder that a full or partial recertification application will be due within six months. Such reviews will be conducted in the same manner as today’s recertification and new certification reviews – with announcements, public comment, and independent reviews.

As is the case today, if there is an action that immediately threatens a facility’s ability to meet the LIHI Criteria, the Certificate holder is required to notify LIHI immediately, regardless of when the Certificate’s next annual compliance report is due. In those cases, a trigger could be activated during a Certificate year.

The proposed approach would be applied only to those who have gone through a new certification or recertification under the 2nd Edition Handbook. 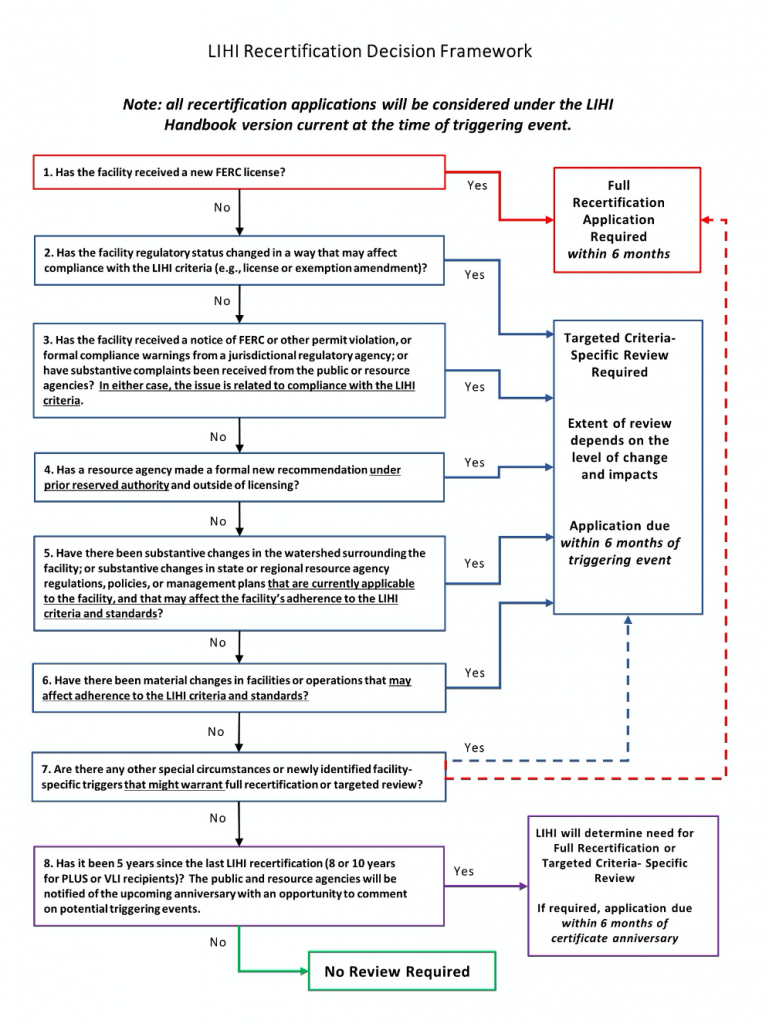 LIHI seeks the public’s input on the following questions:

Proposal comments are due January 27, 2021. For a downloadable copy of this proposal, please click HERE.

Any questions on the proposal can be directed to either Shannon Ames, or Maryalice Fischer.