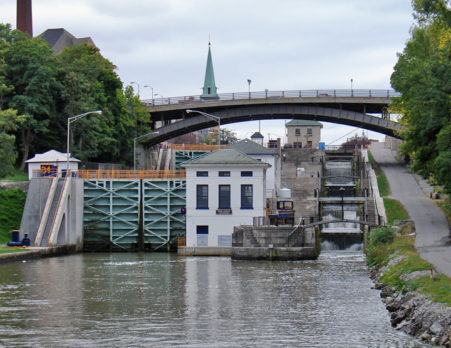 The Hydraulic Race Project is located on the New York State (Erie) Barge Canal System in the Town of Lockport, NY in Niagara County. The Project was constructed in 1942 and is exempt from FERC licensing as a qualifying conduit project. The Erie Canal is an artificial waterway built in 1825 to connect the Hudson River to Lake Erie. The project is located about 30 miles from Lake Erie.

As a conduit facility, the project draws water from the Erie Canal at Lock No. 35 and discharges it below Lock No. 34. Water is conveyed to the project via a 650-foot-long rock tunnel that splits into a canal regulator and a penstock. The canal regulator carries water for navigation in the canal. A 410-foot-long concrete-lined tunnel connects to the 100-foot-long steel penstock which provides water to the powerhouse for generation. The powerhouse contains one vertical Kaplan unit with an installed capacity of 4.867 MW, but flow limitations constrain output to 3.4 MW. Generation is limited to the navigation season which is from approximately May 1 to December 1 each year. During the non-navigation season, the canal is dewatered.

Water is supplied to this portion of the Erie Canal from Tonawanda Creek, Ellicott Creek, and the Niagara River. The New York State Canal Corporation (NYSCC) is responsible for the operation of Lock Nos. 34 and 35 and for maintaining operating water levels in the downstream section of the canal. Control of water releases and the resulting generation from the project is achieved by the Erie Canal Lock Operator adjusting the discharge of water from the canal. Flows typically range from 600 to 800 cfs. Base flows for the hydro project were not recommended by USFWS.

Waters within the project reach are designated Class C. These waters are managed for fishing, fish propagation, and primary/secondary contact recreation. Though the Erie Canal is not listed as impaired, the Niagara River is listed for dioxin, PCB, polycyclic aromatic hydrocarbon, and pesticide impairment. As a conduit facility, the project has no impact on water quality of the surrounding waters.

The Erie Canal is a man-made canal with barge lock activities and annual drawdowns. No migratory species are present but a warmwater fishery exists in the project vicinity. Species include largemouth bass, brown bullhead, and northern pike. Lock operations are likely to facilitate upstream and downstream passage during the navigation season. Trashracks with 5-inch clear spacing mitigate impingement. No year-round natural habitat exists in the project area or canal though some species are opportunistically present. Flows in the canal exceed those provided to the project thus making it unlikely that fish enter the project tunnel or penstock.

Due to the man-made nature of the canal, as well as the small project footprint, no lands of significant ecological value exist in the project area. Additionally, the project tailrace includes a concrete wall that is not subject to erosion concerns.

The Erie Canal itself is designated as a National Historical Landmark and the New York State Barge Canal system is listed on the National Register of Historic Places. There are no cultural or historic resources associated with the project which is not considered part of the historic canal system. However, the project complies with its corporate ‘Compendium of Compatible Operation and Maintenance Activities Pursuant to a Cultural Resources Management Plan.’ Any operations or activities not listed in the Compendium are submitted to the New York Historic Preservation Office for review.

There are no recreational resources associated with the project due to New York State law prohibiting recreation in the canals for purposes of public safety. There are recreational opportunities available nearby including boat sightseeing and guided cycling/walking tours along the canal.

2022: No material changes or compliance issues were identified. he project remains in compliance based on the annual review.

August 8, 2019: The decision to certify the Hydraulic Race Hydroelectric Project is final. No appeals were received during the appeal period which closed on July 19, 2019. The new certification term for the Project is from April 15, 2019 through April 14, 2029.

This decision is preliminary pending the 30-day appeal window. Only those who commented on the initial application during the 60-day comment period are eligible to file an appeal. Such appeal needs to include an explanation as to how the Project does not meet the LIHI criteria. Appeal requests can be submitted by email to comments@lowimpacthydro.org with “Hydraulic Race Hydroelectric Project” in the subject line, or by mail addressed to the Low Impact Hydropower Institute, 329 Massachusetts Ave, Suite 6, Lexington, MA 02420. All requests will be posted to the website.  The applicant will have an opportunity to respond and any response will also be posted. Requests must be received by 5 pm Eastern time on July 19, 2019.  The full application and reviewers report are available below.

April 17, 2019: The Low Impact Hydropower Institute has received a complete application for Low Impact Certification of the Hydraulic Race Hydroelectric Project.  LIHI is seeking public comment on this application.  Specifically, we are interested in knowing whether you think the Project meets the LIHI Low Impact Certification Criteria, as revised in the 2nd Edition Handbook.  Please review the program and criteria in LIHI’s revised Handbook and then review the Project’s application materials below.

Comments that are directly tied to specific LIHI criteria (flows, water quality, fish passage, etc.) will be most helpful, but all comments will be considered.  Comments may be submitted to the Institute by e-mail at comments@lowimpacthydro.org with “Hydraulic Race Project Comments” in the subject line, or by mail addressed to the Low Impact Hydropower Institute, 329 Massachusetts Avenue, Suite 6, Lexington, MA 02420.  Comments must be received on or before 5 pm Eastern time on June 16, 2019 to be considered.  All comments will be posted to the web site and the applicant will have an opportunity to respond.  Any response will also be posted.