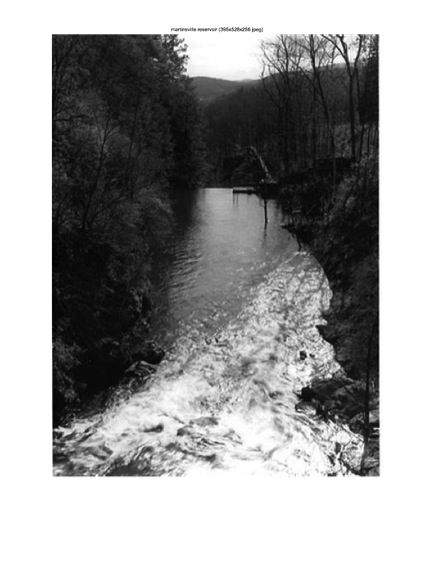 The Martinsville Project is located in the Village of Hartland Three Corners, in Hartland Vermont on Lulls Brook. The project was built in 1984 at the site of a former timber crib dam whose remains were washed away in 1973. Operations began in 1986.

The project includes a15-foot-high, 49-foot-long concrete gravity dam with 4-foot-high flashboards along a 37-foot-long spillway section of the dam; an intake structure at the westside of the dam; a 3-foot-diameter, 455-foot-long wood-stave penstock section leading to a 3-foot-diameter, 100-foot-long steel penstock section; a powerhouse containing two generating units powered by two Ossberger turbines with a total installed capacity of 250 KW; and appurtenant facilities.

The plant is fully automated, equipped with a high-end programmable logic controller with internet monitoring and remote control, for stable operation and pond level control – all maintained by the owner-operator who lives nearby.
The project operates in a run-of-river mode and impounds a 0.1-acre reservoir. The project provides an 11-cfs minimum flow and the river averages 39 cfs annual flow. A 2-cfs bypass flow is provided, and all flows are spilled over the dam when inflow is less than 4 cfs. This flow regime was developed in consultation with the Vermont Agency of Natural Resources (VANR).

Waters in the project area are not listed as a 303(d) impaired surface water but has been marked as needing further assessment for inclusion on future 303(d) listings. The possible source of this listing may be sedimentation from gravel road runoff and needs additional assessment. Consultation with VANR concluded that the project is not having an adverse impact on the water quality of the river.

No fish passage prescription has ever been discussed or proposed for the project as the penstock-bypassed section of the stream is a steep gradient channel of chutes and shallow pools on largely scoured ledge. The dam does not constitute an obstruction to the upstream migration as the steep gradient presents a natural barrier for fish passage. Consultation with the National Marine Fisheries Service indicated that there are no anadromous species historically present in the project area. Catadromous species such as American eel are likely to have been present in the project area but have since been extirpated from the area by downstream dams on the Connecticut River. Eel passage measures are currently being assessed at Connecticut River dams. A future passage prescription is likely to be issued for the project once downstream projects have successfully installed eel passage measures.

The project lands consist of roughly 2 acres. The surrounding lands are primarily steep slopes with heavily forested areas and rock ledges. No lands of significant ecological value exist in the project area due to its small footprint and steep gorges.

In consultation with the Vermont Division for Historic Preservation, it was concluded that the project does not house any historic or cultural resources in the project area or its vicinity.

Other than signage for dangerous conditions, there are no other recreational requirements for the project as the reservoir is about the size of an Olympic-sized swimming pool and has no safe public access because of its confined location. Public access is free of charge, but access is difficult due to the steep terrain and proximity to a state highway. The Vermont Department of Environmental Conservation deems access “practically impossible and dangerous at best.”

As provided for in Section 4.2.5 of the LIHI 2nd Edition Handbook, notice of the preliminary decision to certify was posted on the Institute’s website and sent to the stakeholder email distribution list on January 23, 2017. A 30-day period was provided to anyone who commented on the original application to request an appeal, and no requests for appeal were received.

August 5, 2016: On July 27, 2016, the Low Impact Hydropower Institute received a complete application for a new term of Low Impact Certification for the Martinsville Hydroelectric project.  The application materials can be found in the Files section below.

LIHI is seeking public comment on this application.  Specifically, we are interested in knowing whether you think the Martinsville project continues to meet the LIHI Low Impact Certification Criteria.  Please review the program and criteria in LIHI’s revised Handbook and then review the Project’s 2016 application materials posted on the project page.  Comments that are directly tied to specific LIHI criteria (flows, water quality, fish passage, etc.) will be most helpful, but all comments will be considered.  Comments may be submitted to the Institute by e-mail at comments@lowimpacthydro.org with “Martinsville Project Comments” in the subject line, or by mail addressed to the Low Impact Hydropower Institute, PO Box 194, Harrington Park, New Jersey 07640.  Comments must be received at the Institute on or before 5 pm Eastern time on October 5, 2016 to be considered.  All comments will be posted to the web site and the applicant will have an opportunity to respond.  Any response will also be posted.

May 3, 2011: Martinsville Hydro Corporation received an email from the Streamflow Protection Coordinator from the Vermont Agency of Natural Resources in regards to their Water Quality Certification. It can be read in the Files section below.