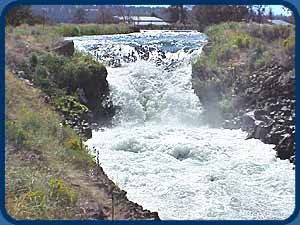 The Siphon Power Project is located on the Deschutes River in the City of Bend, Deschutes County, Oregon. There is no dam associated with the project. There are seven dams on the Deschutes River downstream of the Project to the confluence with the Columbia River. The Wickiup Dam is the next dam located upstream of the project and impounds Wickiup Reservoir, the largest of the Cascade Lakes. There is also a diversion dam approximately 3.5 miles upstream of the Siphon Power diversion. The project diversion was originally constructed in 1903 and later modified into the current configuration in the mid 1970s. The hydropower facilities have been operating since 1989.

The project consists of the use of the pre-existing Central Oregon Irrigation District’s canal system including the Deschutes River diversion and the approximate two miles of water conveyance system downstream which delivers water to the project penstock and powerhouse. Immediately downstream of the diversion intake is the downstream fish louver array that guides and returns entrained fish back to the Deschutes River. Downstream of the fish protection facility, water enters the 10-foot-diameter double inverted siphon pipe. About 1,200 feet downstream of the start of the open canal, a buried 9-foot-diameter pipe is utilized to deliver excess water to the powerhouse. About a mile and a quarter downstream from the diversion structure, an underground powerhouse contains two turbines and generators with a combined capacity of 5.5 MW. From the penstock intake to the river downstream, there is a 135-foot drop available to drive the two turbines which discharge back to the Deschutes River.

The project operates in a run-of-river mode and provides a minimum flow of 400 cfs into the 1.5-mile-long bypass reach. This flow regime was developed in coordination with Oregon Department of Fish and Wildlife (ODFW) to protect fish resources in the Deschutes River. The project diverts 25% of stream flow, on average.

The water available for power generation depends on irrigation flow releases from upstream storage reservoirs during the irrigation season and typically the flow in the bypassed reach is much more than the minimum 400 cfs. During the non-irrigation season, flow available will range from none to the maximum generation capacity of about 640 cfs. Flows are electronically monitored, and streamflow is reported quarterly to resource agencies.

Project waters support coldwater fish species, primarily brown and rainbow trout, as well as a few warmwater species. Non-migratory species include mountain whitefish, several sculpin species, longnose and speckled dace, chiselmouth, and largescale and bridgelip sucker. Since no dam is associated with the project, it does not present a barrier to passage in the river. The minimum bypass flow facilitates downstream movement past the project and the louver array mitigates the potential for entrainment into the irrigation diversion.

The project lands consist of 22 acres. Vegetative buffers are present along the river shorelines, which consist of the ponderosa pine shrub type. Land use in the immediate project vicinity is mostly undeveloped although residential development and the City of Bend and its suburbs are located nearby. The project annually contributes to a Mitigation and Enhancement fund that ODFW facilitates, utilizing funds for river enhancement projects, riparian area regrowth, and even fish passage projects in the Deschutes basin.

Threatened or endangered species potentially present in the project vicinity include the gray wolf, yellow-billed cuckoo, Oregon spotted frog, steelhead trout, and bull trout. Eight irrigation districts (including the project owner) in the Deschutes Basin of Oregon and the City of Prineville, Oregon prepared a Deschutes Basin Habitat Conservation Plan. The plan represents a collaborative effort between irrigators, resource agencies, non-governmental agencies, and the Confederated Tribes of the Warm Springs Reservation to protect the habitat of steelhead trout, bull trout, sockeye salmon, and the Oregon spotted frog and to mitigate the effects of the eight irrigation districts and the City of Prineville on over 480 miles of rivers and creeks.

Recreational resources at the project include a walking trail from the Pilot Butte Canal to the project powerhouse which connects to several other trails in the area. Whitewater boating is not recommended in the project area due to hazardous, life-threatening rapids. Public access is provided free of charge.

June 23, 2021: The Low Impact Hydropower Institute has issued a final decision on the recertification of the Siphon Power Hydroelectric Project. The 30-day appeal window closed on June 16, 2021 and no appeals were filed. Therefore, the decision to recertify the project is now final. The new term for the project is October 28, 2020 through October 27, 2025.

May 18, 2021: The Low Impact Hydropower Institute (LIHI) has preliminarily approved the Siphon Power (LIHI #73) for a new 5-year term of Low Impact Certification.

This decision is preliminary pending the 30-day appeal window. Only those who commented on the initial application during the 60-day comment period are eligible to file an appeal. Such appeal needs to include an explanation as to how the Project does not meet the LIHI criteria. Appeal requests can be submitted by email to comments@lowimpacthydro.org with “Siphon Power Project” in the subject line, or by mail addressed to the Low Impact Hydropower Institute, 1167 Massachusetts Ave, Office 407, Arlington, MA 02476. All requests will be posted to the website. The applicant will have an opportunity to respond and any response will also be posted. Requests must be received by 5 pm Eastern time on June 17, 2021. The full application and reviewer’s report are available below.

If no appeal requests are received and the decision becomes final, the Certification term for the Project will be October 28, 2020 through October 27, 2025.

March 2, 2021: The Low Impact Hydropower Institute (LIHI) has received a complete recertification application from Central Oregon Irrigation District for the Siphon Power Project located on the Deschutes River in Oregon.

LIHI is seeking comment on this application. Comments that are directly tied to specific LIHI criteria (flows, water quality, fish passage, etc.) will be most helpful, but all comments will be considered. Comments may be submitted to the Institute by e-mail at comments@lowimpacthydro.org with “Siphon Power Project Comments” in the subject line, or by mail addressed to the Low Impact Hydropower Institute, 1167 Massachusetts Avenue, Office 407, Arlington, MA 02476. Comments must be received at the Institute on or before 5 pm Eastern time on May 1, 2021 to be considered. All comments will be posted to the web site and the applicant will have an opportunity to respond. Any response will also be posted. The complete application can be found below.

April 20, 2016: LIHI Executive Director Michael J. Sale, using authority delegated from the LIHI Governing Board, has certified that the Siphon Power Hydroelectric Project (FERC No. P-3571) satisfies the LIHI Certification Criteria.  A Preliminary Decision was announced on March 4, 2016, and a 30-day appeal period was open through April 4, 2016. No requests for appeal were received. This Certification Decision includes two facility-specific conditions, as follows:

November 2, 2015: The Low Impact Hydropower Institute has received a complete application for a new term of Low Impact Certification for the Siphon Power Hydroelectric project.  The application materials can be found in the Files section below.

June 19, 2015: The Siphon Power Hydroelectric project has been granted an extension of the current certificate term. The new expiration date is December 31, 2015. See Extension Letter_2015 Recert for explanation below.

October 28, 2010: The Central Oregon Irrigation District has submitted an application for certification of the Siphon Power Project.