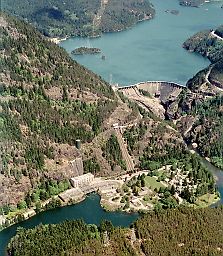 April 3, 2020 COVID-19 Update: The Skagit River Hydroelectric Project and the Ross Lake National Recreation Area are closed to all public visitors until further notice. State Route 20, the primary access route to the hydroelectric project, remains open to just west of the town of Newhalem (milepost 120). The closure point on the east side is at milepost 177. Seattle City Light will continue to work with federal, state, and local authorities to monitor the public health emergency and will provide updates as the situation changes.

The Skagit River Hydroelectric Project (Project) is located in the upper Skagit River basin, in the North Cascade Mountains of Washington State. The Skagit River originates in Canada and drains into northeastern Puget Sound. The Skagit River basin, the third largest in Washington, drains 3,140 square miles, including about 390 square miles in Canada. The river and its tributaries drain mountain areas from east to west, entering the United States from British Columbia at river mile (RM) 127 and flows a total of 162 river miles to Puget Sound near Mount Vernon, Washington. The basin is characterized by rugged mountain topography in the central and eastern parts, and by level floodplains and rolling uplands in the western part.

The Project is owned and operated by Seattle City Light (City Light) and is almost entirely within the Ross Lake National Recreation Area (NRA), which is managed by the National Park Service (NPS) as part of the North Cascades National Park Complex. The Skagit River downstream of the NRA, from Bacon Creek to Sedro-Wooley, is classified as scenic and recreational under the Wild and Scenic Rivers Act and is managed by the U.S. Forest Service (USFS).

The Project is operated under a license from the Federal Energy Regulatory Commission (FERC) that was issued in 1995, extends to 2025 and was most recently amended in 2013. The license incorporates multiple Settlement Agreements, the result of a collaborative negotiation process between City Light and 12 stakeholders (federal and state resource agencies and tribes), that was intended to fully mitigate Project effects on natural and cultural resources in the Project area.

The Project consists of three developments; Ross, Diablo, and Gorge, which are hydraulically coordinated and supply approximately one-fifth of City Light’s power requirements, while maintaining instream flows beneficial to salmon and steelhead reproduction and rearing. In addition, the Project provides flood control storage and a variety of high-quality recreational opportunities, including hiking, sport fishing, boating, and guided tours. The fish resources and the area’s scenic qualities are integral in the lives of Native American tribes who have occupied the basin for millennia. Many historic cultural sites can be found throughout the basin. There are also two towns, Newhalem and Diablo within the Project boundary. Originally construction camps, the towns continue to provide housing for City Light employees and are listed on the National Register of Historic Places.

Dams for the Ross, Diablo, and Gorge developments are located at RMs 105, 101, and 97, respectively. Combined total power generating capacity is about 690 MW, as reported to the FERC. Project hydropower development spanned four decades, with the completion of the first Gorge Dam in 1924, Diablo Dam in 1936, Ross Dam in 1952, and the current Gorge Dam in 1961.

January 26, 2018:  The 30-day appeal window closed for the preliminary decision of the Skagit Hydroelectric project on December 30th, 2017 with no appeals to the decision received. The Recertification decision is therefore final.

The new term of Low Impact Certification for the Skagit Hydroelectric Project is  May 15, 2016 extending for a ten (10) year term which will expire on May 14, 2026.

As provided for in the LIHI 2nd Edition Certification Handbook, the Preliminary Decision, along with the Application Reviewer's report and (if prepared) report of the Executive Director, will be posted on the Institute's web page for 30-days during which time those who provided comments during the application's 60-day public comment period can appeal the decision. Any appeal must include specific reasons why the appellant believes the hydropower facility does not meet one or more criteria. Appeal requests can be submitted by email to comments@lowimpacthydro.org with "Skagit Hydroelectric Project" in the subject line, or by mail addressed to the Low Impact Hydropower Institute, 329 Massachusetts Ave, Suite 2, Lexington, MA 02420. All requests will be posted to the website and the applicant will have an opportunity to respond. Any response will also be posted. Requests must be received by 5 pm EST on December 30, 2017.

If no appeal requests are received and the decision becomes final, the new term for the Skagit project will be May 15, 2016 through May 14, 2026.

LIHI is seeking public comment on this application.  Specifically, we are interested in knowing whether you think the Skagit project continues to meet the LIHI Low Impact Certification Criteria, as revised in the 2nd Edition Handbook.  Please review the program and criteria in LIHI’s Handbook and then review the Project’s application materials.

Comments that are directly tied to specific LIHI criteria (flows, water quality, fish passage, etc.) will be most helpful, but all comments will be considered.  Comments may be submitted to the Institute by e-mail at comments@lowimpacthydro.org with “Skagit Project Comments” in the subject line, or by mail addressed to the Low Impact Hydropower Institute, 329 Massachusetts Avenue, Suite 2, Lexington, MA 02420.  Comments must be received at the Institute on or before 5 pm Eastern time on September 26, 2017 to be considered.  All comments will be posted to the web site and the applicant will have an opportunity to respond.  Any response will also be posted.

December 16, 2016: The Skagit Hydroelectric project has been granted an additional extension of the current certificate term. The new expiration date is July 31, 2017. See extension letter for explanation below.

March 18, 2016: The Skagit Hydroelectric project has been granted an extension of the current certificate term. The new expiration date is November 15, 2016. See below for extension letter.

August 28, 2008: The Skagit River Project has been recertified as low impact, continuing to meet LIHI’s eight environmentally rigorous criteria. The project was issued an eight-year certificate, effective May 15, 2008 and expiring May 15, 2016.

July 12, 2008: The Low Impact Hydropower Institute received a comment letter from Aaron Johnson regarding the certification of the Skagit Hydroelectric Project. The letter can be found in the Files section below.