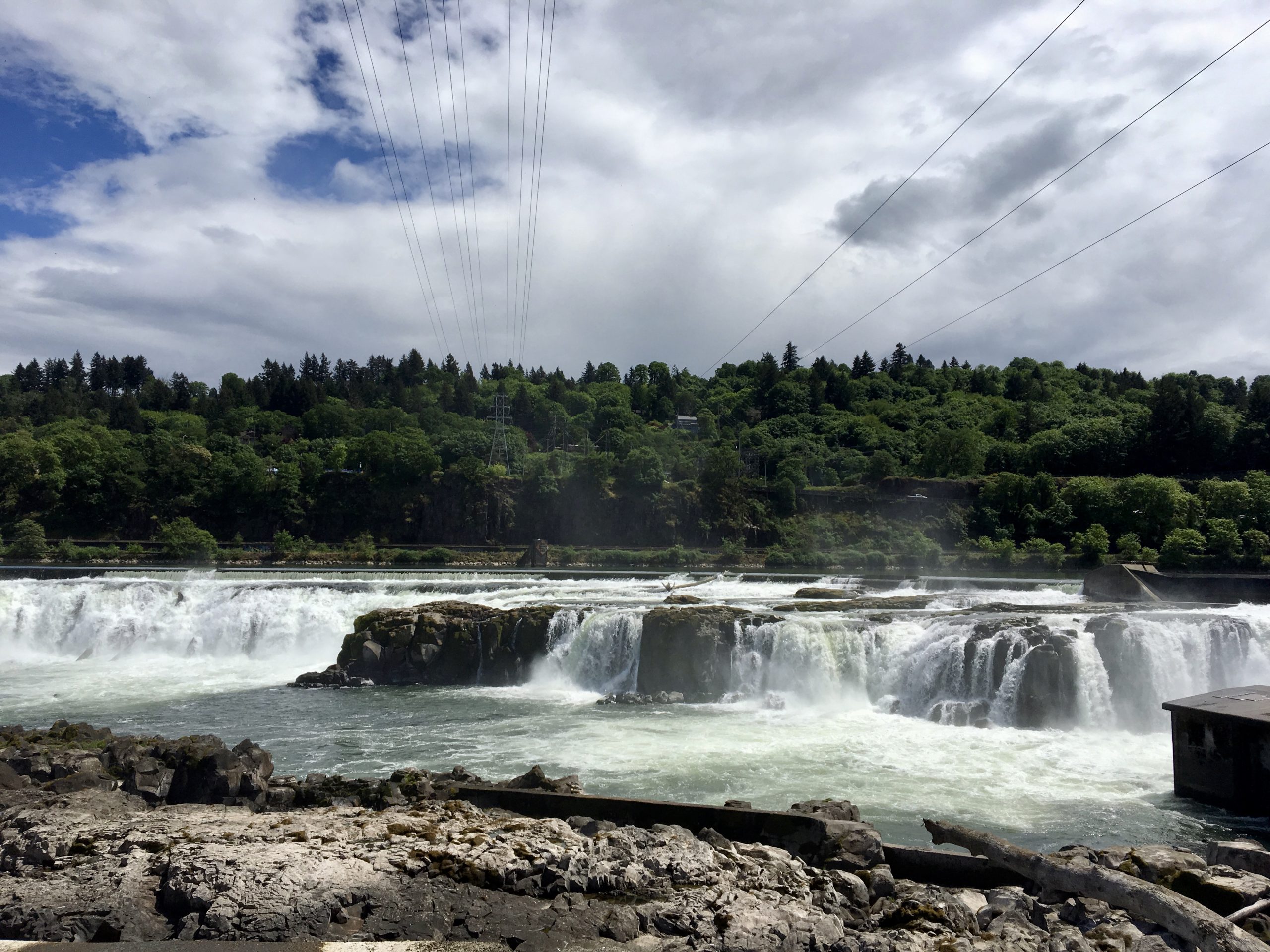 The site has been home to hydroelectric generation for more than 100 years, beginning with “Station A” in 1889 and continuing to this day with the T.W. Sullivan Powerhouse, built in 1895, and the now-shutdown Blue Heron Paper Company (BHPC) powerhouse, built in 1916. Paper mill operations have also been present at the falls for more than a century. Historically the area was also home to flour, saw and pulp mill operations that no longer operate. A navigation canal and locks on the west bank of the river have been operated since 1873, providing 30 feet of lift for commercial barge transport and recreational boat traffic.

The project includes the horseshoe-shaped project dam is located along the crest of Willamette Falls and consists principally of a 600-foot-long spillway section, a 2,300-foot-long dam topped with flashboards, the T.W. Sullivan (TWS) powerhouse, containing 13 turbine/generators with a combined capacity of 16.9 MW, and the now-shutdown BHPC Powerhouse. At the time the project owner applied for a new license for the Project, BHPC operated the BHPC powerhouse and was co-licensee for the Project. The current owner purchased, shutdown, and decommissioned the BHPC powerhouse as part of a suite of fish protection measures.

The Project also includes the West Linn Paper Company’s (formerly Simpson Paper) grinder rooms number two and three at the north abutment of the dam. In 1996, FERC approved the decommissioning of the generating facilities of the project’s Simpson Development. However, because these structures and facilities were integral to the dam, they remained in the project boundary and under license. A fish ladder, owned and operated by Oregon Department of Fish and Wildlife (ODFW), is located on the west side of the Falls, and includes three entrances within the Falls and one at the TWS powerhouse tailrace. The navigation lock at the project is owned and operated by the U.S. Army Corps of Engineers.

The Willamette Falls Dam diverts water into the T.W. Sullivan powerhouse forebay on the west side of the river. The water intakes for the turbines are located at the base of the powerhouse. Water diverted through the powerhouse rejoins the main river immediately below the Falls.

The project operates in a run-of-river mode and impounds a 1,991-acre reservoir. Flashboards are added to the dam around the crest of the Falls during low flow periods of the year, typically summer through fall.

Waters within the project reach are designated as impaired for heavy metal, chemical, bacterial, and temperature contaminations. Consultation with the Oregon Department of Environmental Quality (ODEQ) has confirmed that the project is not responsible for the listed impairment.

Downstream fish passage is provided over the spillway (falls) and through two fish bypasses. The spillway provides safe downstream passage for smolts through the installation of a 15kcfs rubber dam flow control structure that provides a focused migratory path. Migratory salmon species include Chinook and coho salmon as well as anadromous steelhead.

PLUS-Standard: The project owner has implemented numerous innovative forebay modifications that collectively create flow conditions that allow natural migratory behaviors to guide safe fish passage through the project. These modifications included hardening the inner forebay floor, installing a training wall, and re-contouring the inner trashracks to increase sweeping flow to deliver migrants to bypass systems. This has resulted in fish passage efficiency of over 99% with low injury rates through the passage facilities.

The project lands consist of roughly 89 acres. A majority of the land is used for industrial purposes, primarily associated with hydropower generation and paper manufacturing. The shoreline is heavily developed, and no lands of significant ecological value exist in the project area.

Threatened or endangered species potentially present in the project vicinity include Chinook salmon, coho salmon, and steelhead trout. Consultation with NMFS concluded that project operations do not jeopardize the continued existence of the listed species. NMFS also concluded that adult mortality through the project is similar to, if not less than, what mortality would be if the project was not in existence.

In consultation with the State Historic Preservation Office (SHPO), the project owner developed a manual for built resources for reviewing project impacts on historic resources along with its historic properties management plan. This document is the first for any hydroelectric project in the State or Oregon and is used as a model that the SHPO requires other hydroelectric plants to adopt.

PLUS-Standard: A World War I1 era engraving reading “Buy War Bonds” was discovered along basalt outcroppings on the west shore of the project. The project owner collaborated with the property owner, the US Army Corps of Engineers, to clear the site, expose the engraving, prepare an archaeological site form, and document it with the SHPO which then listed it as a historic site.

Recreational resources at the project include two parks and a hiking trail. The parks provide river access, a dock, fishing access, waterskiing, and personal watercraft use. Access is limited directly in the project area due to the highly industrialized nature. Public access is provided free of charge.

May 3, 2018 – On April 27, 2018, the Low Impact Hydropower Institute (LIHI) preliminarily approved the Willamette Falls Project for a new 10-year term of Low Impact Certification. The reviewer’s report is attached at the bottom of this page. This decision is preliminary pending the 30-day appeal window. Only those who commented in the initial application 60-day comment period are eligible to file an appeal. Such appeal needs to include an explanation as to how the project does not meet the LIHI criteria. Appeal requests can be submitted to comments@lowimpacthydro.org. Requests must be received by 5 pm Eastern time on June 2, 2018.  If no appeal requests are received and the decision becomes final, the new term for the Willamette Falls project will be November 2, 2017 through November 1, 2027.

September 26, 2017:  The Low Impact Hydropower Institute has received a complete application for a new term of Low Impact Certification for the Willamette Hydroelectric Project. The Willamette Hydroelectric Project is located in Located at river mile 26.5 on the Willamette River between Oregon City and West Linn in Clackamas County in north-central Oregon. The 2017 application materials can be found below. LIHI is seeking public comment on this application.  Specifically, we are interested in knowing whether you think the Willamette project meets the LIHI Low Impact Certification Criteria, as revised in the 2nd Edition Handbook released in March 2016.  Please review the program and criteria in LIHI’s revised Handbook and then review the Project’s 2017 application materials posted on the project page. Comments that are directly tied to specific LIHI criteria (flows, water quality, fish passage, etc.) will be most helpful, but all comments will be considered.  Comments may be submitted to the Institute by e-mail at comments@lowimpacthydro.org with “Willamette Comments” in the subject line, or by mail addressed to the Low Impact Hydropower Institute, 329 Massachusetts Avenue, Suite 2, Lexington, MA 02420.  Comments must be received at the Institute on or before 5 pm Eastern time on November 26, 2017 to be considered.  All comments will be posted to the web site and the applicant will have an opportunity to respond.  Any response will also be posted.

December 5, 2012: The Low Impact Hydropower Institute has determined that the Willamette Falls Hydroelectric Project continues to meet the certification criteria. They have been re-certified for a second five year term of low impact certification, effective November 2, 2012 and expiring November 2, 2017.

February 29, 2008: The Willamette Falls Hydroelectric Project has been certified as low impact for a five year term, effective November 2, 2007 and expiring November 2, 2012.

November 2, 2007: Portland General Electric has submitted an application for certification of the Willamette Falls Project.