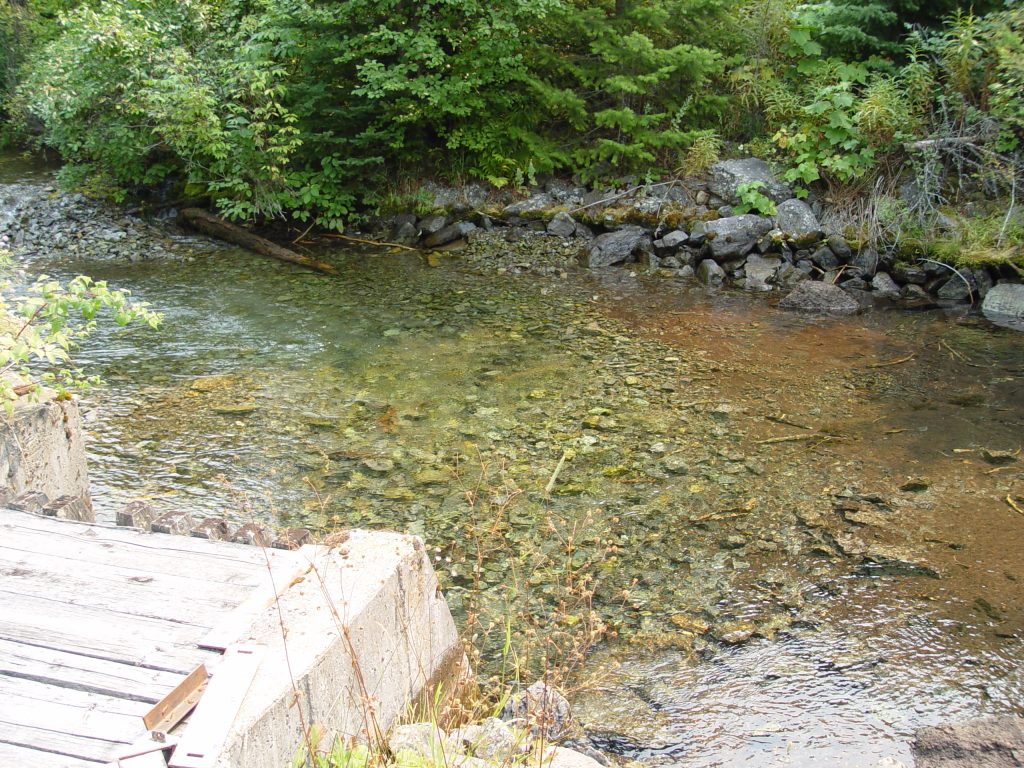 In 1982, the Tribes built Boulder Hydro as a means of promoting economic development. SKHC was created in May 1992 under the laws and constitution of the Confederated Salish and Kootenai Tribes. The Tribal Council serves as the Shareholder for SKHC. A five-member Board of Directors appointed biannually by the Shareholder provides direction. The mission statement of the company is: Promote economic independence by maximizing economic opportunities for the Tribes and the Tribal Membership in a culturally appropriate manner.

The project includes: a diversion, penstock, intake area, powerhouse, and tailrace. Boulder Creek flows much of its journey to Flathead Lake underground. A portion of Boulder Creek surfaces approximately 100 yards upstream from the impoundment. The 5-foot tall, 16-foot-long diversion utilizes all of the flow in all but the highest-level periods occurring during the spring runoff or during a significant runoff event. Even with full dewatering of the stream, water flow reappears less than 10 yards below the diversion structure even in the lowest flow periods of the year. Water is diverted to 3,720 feet of piping and penstock is buried under ground which conveys flows to the powerhouse. The powerhouse contains a single nozzle impulse type turbine with a synchronous generator having a 350-KW maximum generating capacity.

The project operates in a run-of-river mode and impounds a 0.15-acre reservoir with a net storage capacity of 0.025 acre-feet. The project provides a minimum flow of 0.5 cfs below the diversion and a maximum of 8 cfs is diverted to the powerhouse. With no fish present within Boulder Creek, the Tribes’ Division of Water Department concluded this flow regime was appropriate for wildlife and aquatic resource support.

Waters within the project reach are designated A-1 and the project has strictly maintained that classification upstream and downstream of the project area. In addition, as part of the original agreement for an easement to the powerhouse location, the Tribes installed a collection pipe and built a pump house to serve local residents as their primary source of drinking water for their homes. This location is approximately 40 yards downstream from the powerhouse and pumps Boulder Creek water to approximately 10 homes in the vicinity. Boulder Creek, to this day, maintains extremely high-water quality.

Boulder Creek has historically not been supportive of fish populations. The lower stream reaches have extreme elevation barriers in the first 100 yards above its mouth on the east shore of Flathead Lake. The Fisheries Department and Tribal staff have yet to observe any fish species in the stream.

The project lands consist of less than an acre. A 50-foot shoreline conservation buffer zone surrounds the impoundment and prohibits woodcutting near the stream.

The project is located near the base of the Mission Mountains within a designated Tribal wilderness area. Tribal members can hunt and gather wild berries near the location of the Boulder Hydropower project. The species harvested in this area include elk, whitetail and mule deer, turkey, and grouse. Firewood harvesting is also prevalent in the area. There are no restrictions of access to the land around the project and no associated costs to recreate or have access to the land where the facility is located. A Tribal Recreation Permit is required for non-tribal members.

August 6, 2021: The Low Impact Hydropower Institute has issued a final decision on the recertification of the Boulder Creek Project located on Boulder Creek in Montana. The 30-day appeal window closed on August 5, 2021 and no appeals were filed. Therefore, the decision to certify the project is now final. The new term is October 24, 2020 through October 23, 2025.

This decision is preliminary pending the 30-day appeal window. Only those who commented on the initial application during the 60-day comment period are eligible to file an appeal. Such appeal needs to include an explanation as to how the Project does not meet the LIHI criteria. Appeal requests can be submitted by email to comments@lowimpacthydro.org with “Boulder Creek Project” in the subject line, or by mail addressed to the Low Impact Hydropower Institute, 1167 Massachusetts Ave, Office 407, Arlington, MA 02476.
All requests will be posted to the website. The applicant will have an opportunity to respond and any response will also be posted. Requests must be received by 5 pm Eastern time on August 5, 2021. The full application and reviewer’s report are available below.

If no appeal requests are received and the decision becomes final, the Certification term for the Project will be October 24, 2020 through October 23, 2025.

April 14, 2021: The Low Impact Hydropower Institute (LIHI) has received a complete recertification application from The Confederated Salish & Kootenai Tribes for the Boulder Creek Project located on Boulder Creek in Montana.

LIHI is seeking comment on this application. Comments that are directly tied to specific LIHI criteria (flows, water quality, fish passage, etc.) will be most helpful, but all comments will be considered. Comments may be submitted to the Institute by e-mail at comments@lowimpacthydro.org with “Boulder Creek Project Comments” in the subject line, or by mail addressed to the Low Impact Hydropower Institute, 1167 Massachusetts Avenue, Office 407, Arlington, MA 02476. Comments must be received at the Institute on or before 5 pm Eastern time on June 13, 2021 to be considered. All comments will be posted to the web site and the applicant will have an opportunity to respond. Any response will also be posted. The complete application can be found below.

April 12, 2016: LIHI Executive Director Michael J. Sale, using authority delegated from the LIHI Governing Board, has certified that the Boulder Creek Hydroelectric Project (FERC No. P-7086) satisfies the LIHI Certification Criteria. A Preliminary Decision was announced on March 4, 2016, and a 30-day appeal period was open through April 4, 2016. No requests for appeal were received.

The effective certification date for the Boulder Creek Project is October 24, 2015 for a five (5) year term, which will expire on October 24, 2020.

October 22, 2015:  On October 2, 2015, the Low Impact Hydropower Institute received a complete application for a new term of Low Impact Certification for the Boulder Creek Hydroelectric project.  The application materials can be found below.

June 19, 2015: The Boulder Creek Hydroelectric project has been granted an extension of the current certificate term. The new expiration date is December 31, 2015. See ExtensionLetter_2015Recert for explanation below.

October 24, 2007: The S & K Holding Company, Inc., a company owned by the Confederated Salish and Kootenai Tribes, submitted an application for certification of the Boulder Creek Project. A public comment period will be open for 60 days, until December 24, 2007.