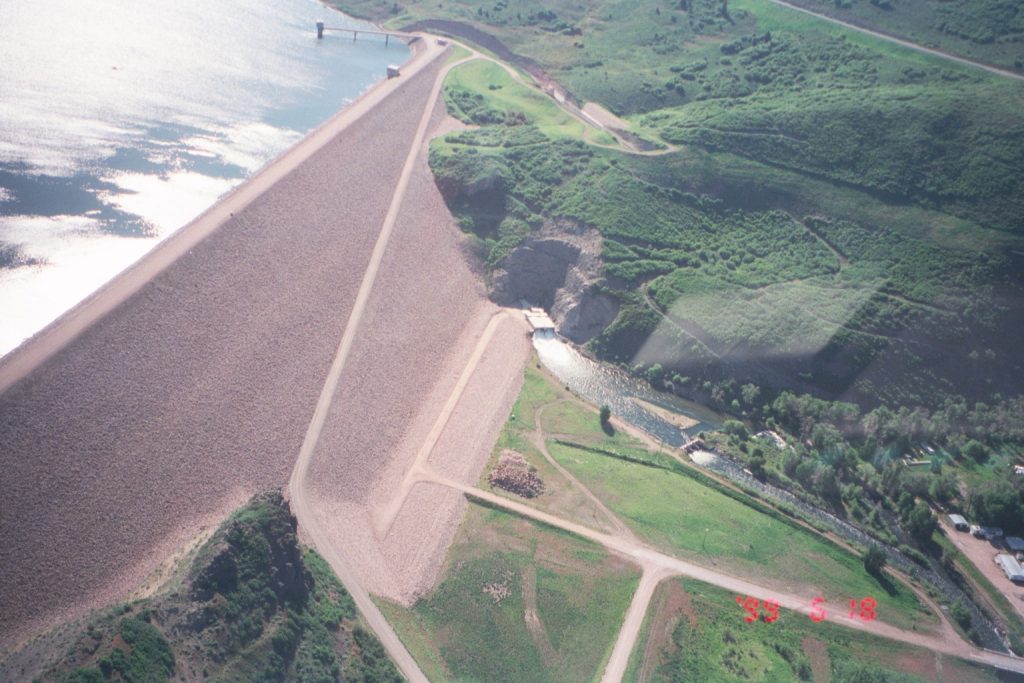 The Jordanelle Project is located on the Provo River in Wasatch County, north of Heber City, Utah. The Project is not licensed by the Federal Energy Regulatory Commission (FERC) but is authorized through a lease of power privilege from the Department of the Interior (DOI), Bureau of Reclamation’s (USBR) Central Utah Project (CUP).

A lease of power privilege grants a non-federal entity the right to utilize, consistent with the CUP purpose, waterpower head and storage at and/or operationally in conjunction with the CUP, for non-federal electric power generation and sale by the entity. The general authority for lease of power privilege under USBR legal statutes includes among others, the Town Sites and Power Development Act of 1906 and the Reclamation Project Act of 1939.

Jordanelle Dam was not primarily built for energy production. The dam is used for the delivery of water downstream for municipal, industrial, irrigation, and water quality purposes in Salt Lake City and the northern Utah County. Other uses include flood control, recreation, fish and wildlife enhancement, and power generation.

Jordanelle Dam is a rolled earthfill structure with a fuse plug emergency spillway and outlet works. The rolled earth embankment section has a structural height of 300 feet and a crest length of 3,820 feet. The emergency fuse plug spillway is located near the left abutment and consists of an unlined inlet channel, a concrete lined trapezoidal channel, an earthen plug section, a concrete chute, and a 9.5-foot by 10-foot concrete double box conduit. The powerhouse is a reinforced concrete structure located partially within the rock berm at the toe of the dam, west of the existing outlet works. The penstock is constructed from the 72-inch-diameter connection in the outlet conduit and then routed to the powerhouse where it bifurcates into two 66-inch-diameter pipes feeding the turbines.

The floor of the powerhouse is set at an elevation below the tailwater elevation. This elevation requires maintenance to be performed on the turbines with tail bay gates installed. Maintenance can be accomplished without the need to de-water the tailrace. The turbines, generators, and all mechanical equipment are located at this level. The turbines discharge into a tailrace channel below the turbine floor.

The major equipment located on the turbine floor includes two horizontal Francis turbine/generator units with a total installed capacity of 13 MW; turbine controllers; turbine inlet valves located on the penstock to each turbine; a hydraulic power unit for each unit and valve; and sump pumps. The powerhouse arrangement includes a control room area. A control room is required to house the control panels, switchgear, motor control center, panel boards, batteries, and battery chargers. The control room is isolated from the turbine floor and sound-proofed to provide a quiet space for the operator. It is located above the turbine floor to protect the equipment from potential flooding and is located near the plant substation to minimize conduit and cable runs.

The project operates in a store-and-release mode and is sited at a reservoir controlled by the USBR. The project itself is not responsible for reservoir management and does not have any effect on the operation of the Jordanelle Dam and reservoir.

Waters within the project reach are designated as Class 1C, 2A, 3A, and 4:

No anadromous or catadromous fish are present in the project area. Multiple downstream barriers preclude access for migratory fish. The project itself does not present a barrier to passage but flows released from the dam are of too high a velocity to support passage. Resident species in the Jordanelle Reservoir include smallmouth bass, brown trout, yellow perch, walleye, rainbow trout, cutthroat trout, Utah chub, Utah sucker, black crappie, and brook trout.

The project operates under the Jordanelle Reservoir Management Boundary Plan which established a buffer zone maintained around the reservoir.

PLUS-Standard: The buffer zone was established with consideration given to water quality protection, protecting the reservoir from potential development, recreation development, wildlife mitigation, and geology/slope stability.

Threatened or endangered species potentially present in the project vicinity include the bald eagle, Black-footed ferret, Canada lynx, Bonneville cutthroat trout, Colorado River cutthroat trout, and June sucker. No critical habitat exists for the bald eagle or black-footed ferret and no populations have been noted. While the Canada lynx has been spotted in the project area once since 2004, no critical habitat for the species occurs in the area. The June Sucker Recovery Program that the project owner collaborates with US Fish and Wildlife Service on has seen sufficient progress in reestablishing the species.

Based on consultation with the State Historic Preservation Office, there are no cultural resources present at the project and no historic properties are affected by the project.

The project’s water supply security measures preclude access to the hydro project as it is in a protected area not open to the public. However, the reservoir is considered a world-class fishery and the area is managed by Utah State Parks. Free recreation access and facilities are provided below the project.

2022: No material changes or compliance issues were identified. The project remains in compliance based on the annual review.  For Condition 1, the project confirmed compliance and consultation with resource agencies.

2021: There were no reported changes or compliance issues. The project remains in compliance based on the annual review. For Condition 1, the project confirmed release of the committed flows and consultation with resource agencies.  USFWS downlisted the June Sucker from endangered to threatened, and implemented a Section 4(d) rule to protect the species.

2020: There were no reported changes or compliance issues. The project remains in compliance based on the annual review. For Condition 1, the project confirmed release of the committed flows and consultation with resource agencies.

2019: There were no reported changes or compliance issues. The project remains in compliance based on the annual review. For Condition 1, the project confirmed release of the committed flows and consultation with resource agencies.

2018: There were no reported changes or compliance issues. The project remains in compliance based on the annual review. For Condition 1, the project confirmed release of the committed flows and consultation with resource agencies.

2017:  There were no reported changes or compliance issues. The project remains in compliance based on the annual review. For Condition 1, the project confirmed release of the committed flows and consultation with resource agencies.

June 10, 2016: LIHI Executive Director Michael J. Sale, using authority delegated from the LIHI Governing Board, has certified that the Jordanelle Hydroelectric Project satisfies the LIHI Certificate Criteria. A Preliminary Decision was announced on May 6, 2016, and a 30-day appeal period was open through June 6, 2016. No requests for appeal were received.

The public comment period for this application closed on December 28, 2015.

June 19, 2015: The Jordanelle Dam Hydroelectric project has been granted an extension of the current certificate term. The new expiration date is December 31, 2015. See 2015 Recertification Extension Letter for explanation below.

June 10, 2007: The Central Utah Water Conservancy District (CUWCD) has submitted an application for certification of the Jordanelle Dam Hydroelectric Project. A comment period will remain open for 60 days, until August 10, 2007.