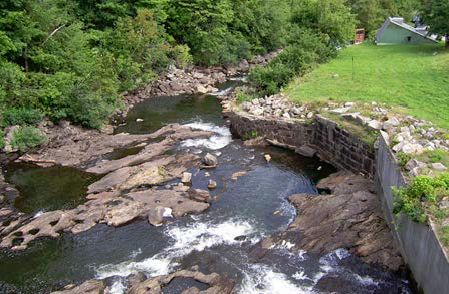 The American Tissue Project is located on Cobbosseecontee Stream in Gardiner, Kennebec County, Maine. Of the five dams located on the 11-mile stream, the project is the only dam used for hydropower generation.

The project dam was constructed in 1900 and operated as a run-of-river facility until the powerhouse was destroyed by fire in 1970. The Project was relicensed on May 9, 1979, and began operation once reconstruction was completed in 1983.

The project includes a gravity dam consisting of:

three 4.67-foot-diameter pipes with steel slide gates located at the base of the dam;

The project operates in a run-of-river mode and impounds a 5.5 acre reservoir which creates a bypassed reach 345 feet long. A bypass minimum flow of 10 cfs is provided from December 1 through May 31 and 29 cfs from June 1 through November 30. After releasing the minimum flow, if the remaining inflow is less than 100 cfs, the turbine is not run, and the remaining inflow is spilled over the spillway. Inflow from 100 cfs to 360 cfs is passed through the turbine while maintaining the impoundment at its normal headpond elevation. Inflow greater than 360 cfs is passed over the spillway. This flow regime was developed in consultation with US Fish and Wildlife Service.

Waters within the project reach are designated Class B, supporting designated uses including aquatic biota habitat, drinking water supply after treatment, angling, recreation in and on the water, and hydropower generation. Water quality testing was conducted for the project reaches from June to October of 2015. The results of the testing were confirmed by the Maine Department of Environmental Protection (MDEP) to meet Class B designations for dissolved oxygen. However, due to nutrient loading from upstream sources, Class B aquatic life standards were not being met. According to MDEP, the project is not causing or contributing to the nutrient enrichment.

Cobbosseecontee Stream has historically supported migratory runs for seven species of native diadromous fish. Beginning with the Gardiner Paperboard Dam, the introduction of dams without fishways severely reduced or extirpated these species from the waterway. Alewife, American shad, Atlantic salmon, blueback herring, rainbow smelt, and striped bass were all prevented from migrating upstream. The project dam was constructed in 1879, over 100 years after the lowermost dam, Gardiner Paperboard Dam No. 5’s construction (in 1761). Alewife have been reintroduced to the river to attract sportfish, a successful strategy employed by the Maine Department of Marine Resources (MDMR). The project owner consulted MDEP, MDMR, Maine Inland Fisheries and Wildlife, and the National Marine Fisheries Service to design and implement permanent upstream passage facilities for American eel. The eel ladder is operated from June 1 through September 15, or as recommended by resource agencies based on site conditions. Downstream fish passage facilities operate from June 1 through November 30, or as recommended by resource agencies based on site conditions. Downstream American eel passage is operated from August 15 through November 15.

The project lands consist of roughly 7 acres. The topography of the Cobbosseecontee watershed is mostly rolling, low elevation hills and valleys. The project area is primarily forested upland, with deciduous and mixed forest lining the shore in the project area.

Threatened or endangered species potentially present in the project vicinity include the northern long-eared bat, little brown bat, eastern small-footed bat, big brown bat, red bat, hoary bat, silver-haired bat, and tri-colored bat. The project area does not support critical habitat for these species. Additionally, due to its small footprint, the project is unlikely to adversely impact the listed species.

The project area is host to the remains of Gardiner Mill which lay beneath the impoundment and are only exposed briefly for scheduled dewatering events. Little is known about the integrity of the remains nor their eligibility for listing on the National Register of Historic Places. Consultation with the State Historic Preservation Officer must occur prior to drawdowns in order to prescribe protective measures to help preserve any historic property that may be exposed.

Recreational resources near the project include a city park near the impoundment. Access to project lands is generally restricted due to the steep wooded terrain and industrial/commercial uses on the south bank. An informal canoe portage route is available from the impoundment to a hand-carry boat launch downstream of the Gardiner Paperboard Dam.

August 9, 2022: The decision to certify the American Tissue Project became final after the close of the appeals period on August 4, 2022 with no appeals filed. The Certification term is from April 26, 2022 – April 25, 2032.  The Certificate includes the following conditions:

This decision is preliminary pending the 30-day appeal window. Only those who commented on the initial application during the 60-day comment period are eligible to file an appeal. Such appeal needs to include an explanation as to how the Project does not meet the LIHI criteria. Appeal requests can be submitted by email to comments@lowimpacthydro.org with “American Tissue Project” in the subject line, or by mail addressed to the Low Impact Hydropower Institute, 1167 Massachusetts Ave, Office 407, Arlington, MA 02476. All requests will be posted to the website. The applicant will have an opportunity to respond and any response will also be posted. Requests must be received by 5 pm Eastern time on August 4, 2022.

Comments that are directly tied to specific LIHI criteria (flows, water quality, fish passage, etc.) will be most helpful, but all comments will be considered.  Comments may be submitted to the Institute by e-mail at comments@lowimpacthydro.org with “American Tissue Project Comments” in the subject line, or by mail addressed to the Low Impact Hydropower Institute, 329 Massachusetts Avenue, Suite 6, Lexington, MA 02420.  Comments must be received on or before 5 pm Eastern time on January 12, 2020 to be considered.  All comments will be posted to the web site and the applicant will have an opportunity to respond.  Any response will also be posted.