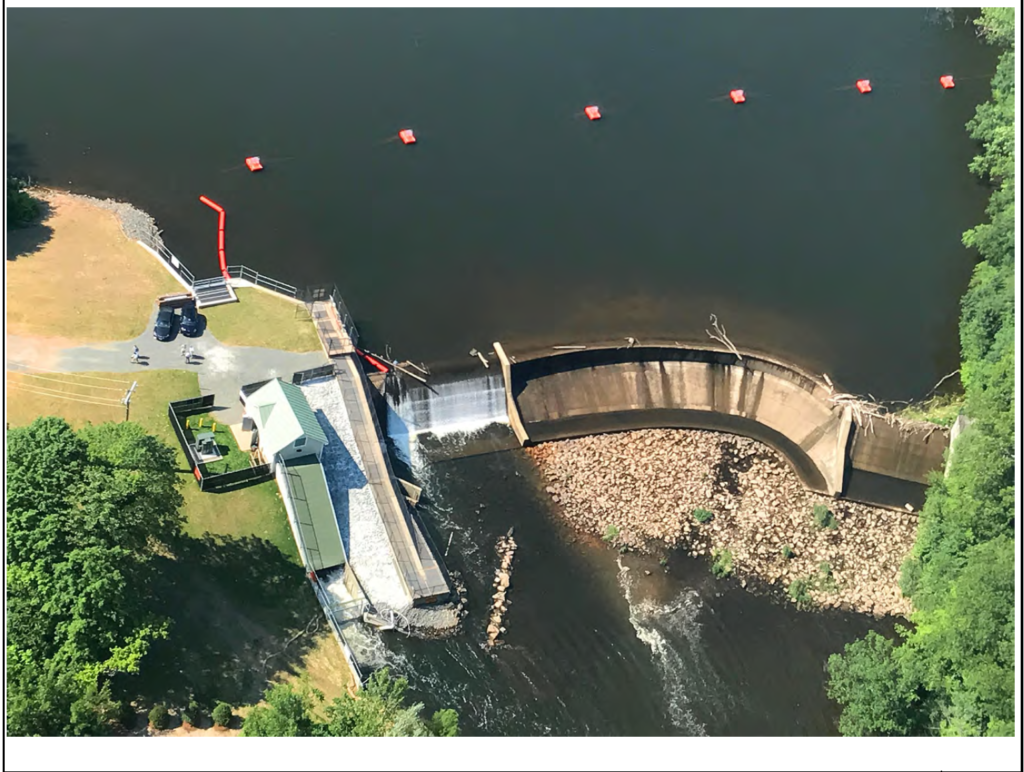 The Hanover Pond Dam Project is located on the Quinnipiac River in Meriden, CT. Historically, over 100 Industrial Revolution-era dams existed on the Quinnipiac River. A dam was originally built at the approximate location of the existing dam in the 1850s and Hanover Pond was impounded to provide hydropower to the former Meriden Cutlery Factory. The factory buildings were located downstream and south of the facility site. All buildings associated with the factory, which closed in the 1920s, were demolished in the 1930s. The only known portions of the factory complex on the site were the original timber crib dam (now demolished and fully rebuilt) and a former north-south oriented water intake canal that once traversed the western portion of the Facility Site (abandoned and filled sometime between 1934 and 1951). The dam was reconstructed by the City of Meriden in 2005-2006 at which time an upstream fish passage facility was installed. Both the dam and fishway are owned by the City.

The Project consists of a 12-foot-wide, 8-foot-high intake structure, a 78-foot-long buried penstock, an Archimedes Screw Turbine (AST), which is 46.5 feet long and 11.65 feet in diameter housed in a concrete trough sloping down the downstream face of the earthen section of the dam, and the short tailrace immediately emptying into the river below the dam. The generator, gearbox, electrics and other controls are located inside the powerhouse. The entire facility is located adjacent to the existing upstream fishway installed by the City of Meriden when the dam was reconstructed in 2005. The dam is 25 feet high and 397 feet long consisting of a 150-foot-long earthen embankment and a 247-foot-long concrete spillway with five sections at varying elevations including a 6-foot-long low-flow notch section which provides minimum flows from the impoundment into the 65-foot-long bypassed reach. The dam forms a 71-acre impoundment.

The project operates in run-of-river mode. An upstream river gage automatically adjusts the sluice gate to maintain a pre-set river level. The project provides a minimum flow of 30 cfs or inflow (if less). If flows are insufficient, the AST automatically shuts down to allow flows to increase to required levels. This flow regime was developed in consultation with USFWS, the National Marine Fisheries Service, and Connecticut Department of Energy and Environmental Protection (CTDEEP) in an effort to ensure suitable downstream flows and aquatic habitat.

Waters within the project reach are designated as Class B, best used for primary contact recreation and fish and wildlife habitat. Waters in the impoundment and downstream reach have been classified as non-supporting of aquatic habitat or recreation due to various factors including eutrophication, bacterial presence, and sedimentation. However, pre- and post-construction water quality monitoring found that dissolved oxygen and temperature meet state standards. Results did not vary substantially between upstream and downstream reaches of the project, indicating that the project does not affect water quality in the river.

Migratory fish species within the project area include American eel, sea lamprey, alewife and blueback herring, and American shad. Passage of these migratory species has begun to rebound following the removal of many dams on the Quinnipiac River. During the rebuilding of the dam in 2005, the City of Meriden constructed a Denil style fish ladder designed to pass American shad, blueback herring, and sea lamprey. A boulder fish passage channel was installed in 2017 intended to minimize false attraction flows near the tailrace and to create a pathway to guide fish to the fish ladder. Additionally, an upstream trap was installed at the base of the tailrace to aid passage of American eel. A low-flow notch in the spillway provides downstream passage and concentrates flows during the low-flow season, directing spill into a plunge pool with a minimum 2-foot water depth.

Plus-Standard Option: The Project is the first hydroelectric facility in the United States to employ the Archimedes Screw Turbine (AST) for power generation. The AST uses the head of an existing, previously non-powered dam to produce electricity through a slowly turning screw attached to a variable speed gear box and generator, which distributes the electricity produced out to the grid. The AST is known for its ability to pass fish safely downstream and was chosen for installation at the project with support from state and federal resource agencies because of this attribute. Studies to confirm effective downstream passage for all species, as prescribed, have been completed. Some agency reviews are still in progress, but no additional surveys are anticipated. Operation and maintenance of an eel trap to provide upstream passage, as well as submission of an annual summary of findings, will continue through the life of the project. A trashrack with 9-inch clear spacing was installed on the intake to encourage passage through the turbine.

The project lands consist of roughly one acre. Most of the nearby lands are owned by the City of Meriden and surrounding land use consists of residential housing, commercial buildings, and a recreational complex. Some narrow wetlands fringe the shore and the shoreline upstream of the powerhouse is armored with riprap and a concrete wing wall to mitigate the potential for erosion. The project operates under an Invasive Species Control Plan which includes provisions for mapping, monitoring, and reporting of existing invasive species and the implementation of control measures needed to mitigate their presence. Species include oriental bittersweet and common reed.

Threatened or endangered species potentially present in the project vicinity include the Northern long-eared bat, eastern box turtle, wood turtle, and squarrose sedge. Normal maintenance of the project site includes mowing and cutting back brush/low growing vegetation, but these actions do not impede any natural habitat for bats. It is unlikely that the bat species is present within the project site due to its small size and urban location. The turtle species could be found at the site and there had been historic observation of sedge in the area. Construction-related mitigation was conducted for turtle species and no further action was required for the sedge upon consultation with CTDEEP.

No structures of cultural or historic significance exist at the site after demolition of the factory complex in the 1930s. Consultation with the Connecticut State Historic Preservation Office indicated that no impacts to cultural or historic resources as a result of project construction or operation.

Recreation is allowed in the impoundment with two boat access points. Informal take-out and put-in locations existed prior to construction which have since been improved with gravel and signage. More formal locations are located farther from the project. The facility infrastructure is fenced for safety. Public access is provided free of charge.

October 28, 2019: On October 25, 2019 the Low Impact Hydropower Institute preliminarily approved Low Impact Certification for the Hanover Pond Dam Hydroelectric Project. This decision is preliminary pending the 30-day appeal window. Only those who commented on the initial application during the 60-day comment period are eligible to file an appeal. Such appeal needs to include an explanation as to how the Project does not meet the LIHI criteria. Appeal requests can be submitted by email to comments@lowimpacthydro.org with “Hanover Pond Hydroelectric Project” in the subject line, or by mail addressed to the Low Impact Hydropower Institute, 329 Massachusetts Ave, Suite 6, Lexington, MA 02420. All requests will be posted to the website.  The applicant will have an opportunity to respond and any response will also be posted. Requests must be received by 5 pm Eastern time on November 27, 2019.  The full application and reviewers report are available below. If no appeal requests are received and the decision becomes final, the Certification term for the Project (pending LIHI #165) will be August 12, 2019 for a term of five (5) years, which will expire on August 11, 2024.

August 13, 2019: The Low Impact Hydropower Institute has received a complete application for Low Impact Certification of the Hanover Pond Dam Hydroelectric Project.  LIHI is seeking public comment on this application.  Specifically, we are interested in knowing whether you think the Project meets the LIHI Low Impact Certification Criteria, as revised in the 2nd Edition Handbook.  Please review the program and criteria in LIHI’s revised Handbook and then review the Project’s application materials below. Comments that are directly tied to specific LIHI criteria (flows, water quality, fish passage, etc.) will be most helpful, but all comments will be considered.  Comments may be submitted to the Institute by e-mail at comments@lowimpacthydro.org with “Hanover Pond Dam Project Comments” in the subject line, or by mail addressed to the Low Impact Hydropower Institute, 329 Massachusetts Avenue, Suite 6, Lexington, MA 02420.  Comments must be received on or before 5 pm Eastern time on October 12, 2019 to be considered.  All comments will be posted to the web site and the applicant will have an opportunity to respond.  Any response will also be posted.