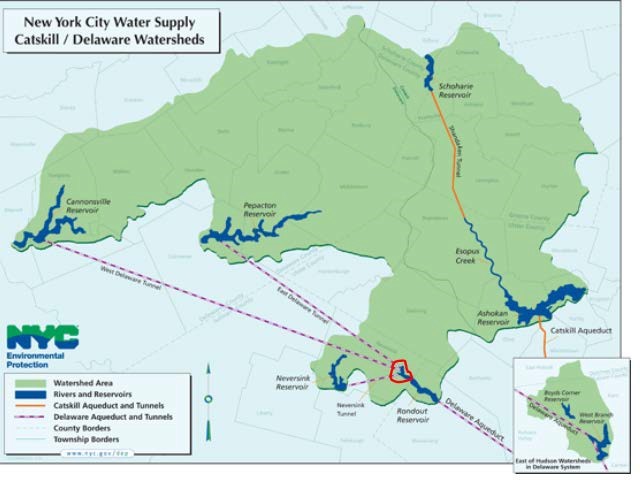 The West Delaware Tunnel Project is located near Grahamsville in Sullivan County, New York, on land owned by the New York City Department of Environmental Protection (NYCDEP) as part of their West Delaware Aqueduct, which supplies drinking water to New York City. The project is located in the aqueduct between Rondout Reservoir and Cannonsville Reservoir. The project was constructed in 1987 several decades after the construction of the two reservoirs in 1950 and 1964, respectively.

The project includes a 60-foot-long, 66-inch-diameter penstock and a powerhouse. The owner has an easement for the use of the property. The powerhouse contains one vertical Francis turbine/generator with a capacity of 7.5 MW. Water is diverted from the West Delaware Aqueduct to the buried penstock which brings the water to the powerhouse turbine. The water is discharged into a stilling pool (used to reduce the water velocity) which in turn discharges into Rondout Reservoir.

The project operates as a conduit facility. On a weekly basis, the NYCDEP sends a water allotment based upon NY City’s water supply needs. NYCDEP’s system determines the weekly water allotment based upon a number of factors including reservoir levels, inflow forecasts, climatology, and water quality. If there is a given allotment from the NYCDEP, the project owner will then determine the flow rate and timing schedule to deliver the requested allotment over the period specified. Typically, the project will run its turbine at best efficiency to maximize power for a peaking schedule.

Waters within the project reach are designated as Class AA drinking water. The associated reservoirs are both impaired for mercury caused by atmospheric deposition and Cannonsville reservoir is listed for phosphorus from agricultural and municipal sources. As a conduit facility, the project does not impact water quality.

The project does not create a barrier to fish passage nor are there any migratory fish expected to be impacted by water flowing in the Aqueduct. Both reservoirs are annually stocked with brown, lake, and rainbow trout and natural populations of alewife and smelt can be found in Rondout Reservoir due to its tributary (Rondout Creek).

The powerhouse is located within a fenced property with an area of approximately 4,000 square yards. No lands of significant ecological value are found in the project reach due to its man-made nature.

Threatened and endangered species potentially within the project vicinity include the Bald eagle. A bald eagle nest has been observed roughly 500 feet from the site boundary. The only concern identified was the design of the transmission lines to avoid electrocution hazards associated with the project. The US Fish and Wildlife Service raised this concern, but the transmission lines are not under project ownership.

The project owner consulted with the New York State Division of Historic Preservation which concluded that no historic properties are affected by the operations of the project.

The powerhouse is a secure and fenced area with no opportunity for public access. Recreation at the nearby Rondout Reservoir is strictly controlled and managed by the NYCDEP as it is used for drinking water supply.

July 16, 2019: The decision to certify the West Delaware Tunnel Hydroelectric Project is final. No appeals were received during the appeal period which closed on July 13, 2019. The new certification term for the Project is from March 29, 2019 through March 28, 2029.

This decision is preliminary pending the 30-day appeal window. Only those who commented on the initial application during the 60-day comment period are eligible to file an appeal. Such appeal needs to include an explanation as to how the Project does not meet the LIHI criteria. Appeal requests can be submitted by email to comments@lowimpacthydro.org with “West Delaware Tunnel Hydroelectric Project” in the subject line, or by mail addressed to the Low Impact Hydropower Institute, 329 Massachusetts Ave, Suite 6, Lexington, MA 02420. All requests will be posted to the website.  The applicant will have an opportunity to respond and any response will also be posted. Requests must be received by 5 pm Eastern time on July 13, 2019.  The full application and reviewers report are available below.

If no appeal requests are received and the decision becomes final, the Certification term for the Project (pending LIHI #151) will be March 29, 2019 through March 28, 2029.

April 2, 2019:The Low Impact Hydropower Institute has received a complete application for Low Impact Certification of the West Delaware Tunnel Hydroelectric Project.  LIHI is seeking public comment on this application.  Specifically, we are interested in knowing whether you think the Project meets the LIHI Low Impact Certification Criteria, as revised in the 2nd Edition Handbook.  Please review the program and criteria in LIHI’s revised Handbook and then review the Project’s application materials below.

Comments that are directly tied to specific LIHI criteria (flows, water quality, fish passage, etc.) will be most helpful, but all comments will be considered.  Comments may be submitted to the Institute by e-mail at comments@lowimpacthydro.org with “West Delaware Tunnel Project Comments” in the subject line, or by mail addressed to the Low Impact Hydropower Institute, 329 Massachusetts Avenue, Suite 6, Lexington, MA 02420.  Comments must be received on or before 5 pm Eastern time on June 1, 2019 to be considered.  All comments will be posted to the web site and the applicant will have an opportunity to respond.  Any response will also be posted.