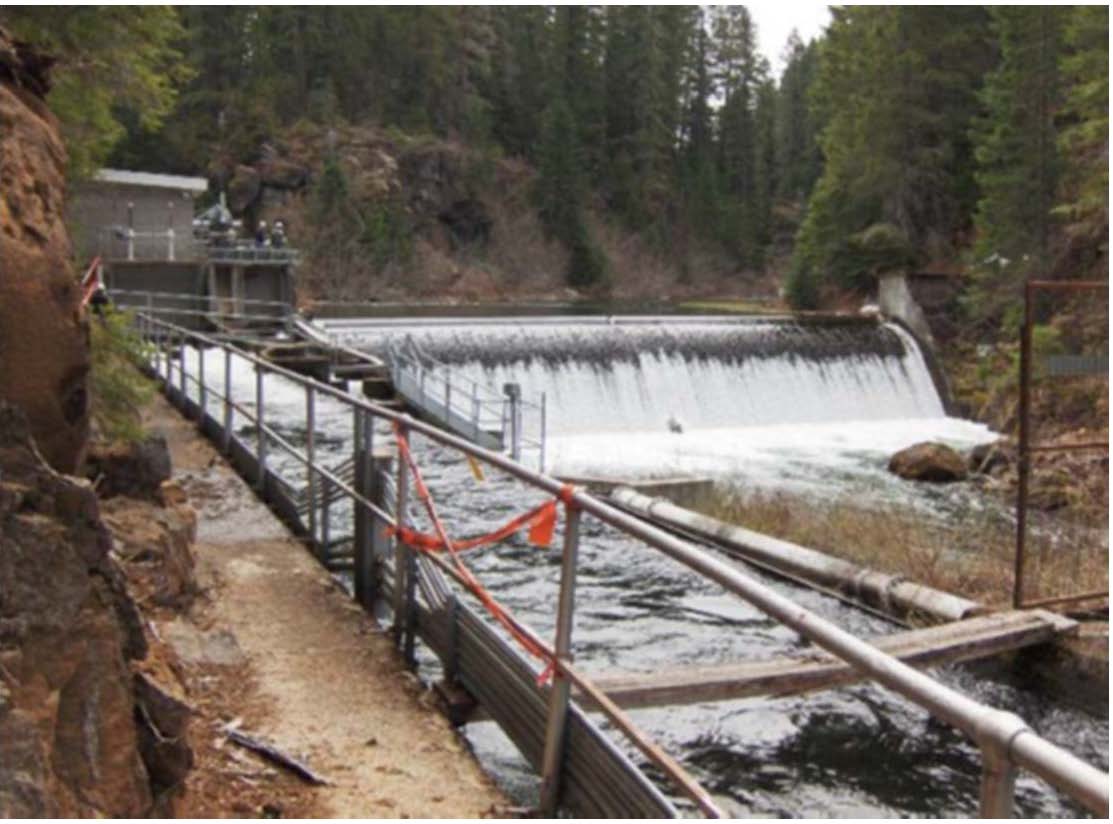 The Prospect No. 3 Project is located on the South Fork of the Rogue River in Jackson County, Oregon. It is one of four hydroelectric developments operated by PacifiCorp in the Rogue River basin. The facility is located on the western slope of the Cascade mountain range in southwestern Oregon near the town of Prospect. The other three developments, Prospect Nos. 1, 2, and 4 are operated under FERC License No. 2630. The facility was originally constructed from 1931-1932 and is partially located in the Rogue River-Siskiyou National Forest.

The project includes the South Fork dam, a 24.7-foot-high, 172-foot-long concrete dam with an integral 98-footlong ogee spillway. The intake structure at the dam and a 3-mile-long conveyance system consists of a 273-foot-long concrete-lined canal section, a 66-inch-diameter, 5,448-foot-long wood stave pipeline (flowline), a 5,805-foot-long concrete-lined canal section, a 698-foot-long concrete-lined horseshoe type tunnel 5 feet wide by 6.5 feet high, a 416-foot-long canal to penstock transition (forebay) with a 2,486-foot-long side channel spillway that discharges to Daniel Creek, and a 3,254-foot-long steel penstock ranging from 66 inches to 48 inches in diameter. The dam creates a 10.5-mile bypassed reach. The existing wood stave flowline and sag pipe are being replaced with steel pipe. A 66-inch, 887-foot-long, inverted siphon (sag pipe) routes flow from the project tailrace to the Middle Fork Canal of the Prospect Nos. 1,2, and 4 Project. The existing siphon is primarily of wood-stave construction with the exception of an approximately 250-foot-long section of steel pipe over the Middle Fork Rogue River. The powerhouse contains one vertical-shaft, Francis-type turbine with a capacity of 7.2 MW.

The project operates in a run-of-river mode and impounds a 1-acre reservoir. A Programmable Logic Controller (PLC) controls flows to maintain a constant forebay elevation in response to input from level sensors at the forebay. The adjustments directly affect the rate of water diversion at the dam, and ultimately result in a near-constant reservoir level for much of the year. A continuous minimum flow of 30 cfs is provided into the bypass from March 1 through July 31 and 20 cfs from August 1 through February 28. This flow regime was developed with consultation from the Oregon Department of Environmental Quality (ODEQ).

In 1997, the construction of the US Army Corps of Engineers William L. Jess dam, roughly 22 miles downstream, created a barrier to migration of salmon and steelhead up to the project reach. Numerous other dams farther downstream dating back to the 1800s also blocked passage until their removal in the 2000s. Upstream passage is provided at the project via an 86-foot-long pool and weir type fishway. Resident native species include rainbow and cutthroat trout, both of which spawn in the South Fork Rogue river upstream and downstream of the diversion dam. Both species require migration to complete their life cycles. Brown and brook trout are also present as introduced species. All four species have self-sustaining populations in the project vicinity. Downstream fish passage facilities consist of a 0.25-inch wedge-wire and inclined plane fish screen. Migratory fish can access the North Fork Rogue River bypassed reach via spill through the North Fork Dam spill gates and/or via the log chute used to maintain minimum flows in the North Fork Rogue River.

The project also provides offsite mitigation measures to improve fish and aquatic habitat in the Rogue River watershed. This includes replacing two culverts on Big Ben Creek with a new culvert and replacing one culvert on Imnaha Creek, both on US Forest Service (USFS) lands. The new culverts are designed to allow upstream fish passage. The project owner is responsible for permitting, installation, post-construction monitoring, and preparation of a final report regarding the culvert projects. Additionally, the project owner is responsible for funding of $177,770 and $10,000 in in-kind labor for the removal of three small privately-owned diversion dams on Slate Creek and Welter Creek, including costs for permitting, dam removal, follow-up monitoring, and preparation of a final report at completion of the removals.

The project lands consist of 367.2 acres, of which 52.5 acres are federal land administered by USFS. The project operates under a vegetation management plan to promote the establishment and maintenance of native plant communities while minimizing the spread of noxious weed species. Additionally, the project has an erosion and sediment control plan which includes provisions for surveys of project-affected lands to inventory and assess erosions sites, implement erosion control measures, and monitor the effectiveness of the measures.

The project facilities contribute to the Prospect Hydroelectric Project Historic District, which also includes aspects of the other three Prospect facilities. The Oregon State Historic Preservation Office (SHPO) noted that these elements are eligible for listing on the National Register of Historic Places. Five archaeological sites were also identified by the SHPO though none were inside the project boundary or impacted by project operations. The project operates under a historic properties management plan which was prepared in consultation with the SHPO, USFS, and the Cow Creek Band of Umpqua Tribe of Indians. The plan includes measures to mitigate adverse effects related to any new project construction or modifications, and to protect known and previously undiscovered cultural and historic resources.

No formal recreational amenities exist in the project area. Private land ownership in the lower portion of the project also precludes public access. However, the Rogue River-Siskiyou National Forest lands surround the upper portion of the project which provides opportunities for hunting, fishing, camping, hiking, birdwatching, and picnicking. Additionally, North Fork Park, adjacent to the project reservoir, provides a picnic area and hiking trails. Public access is provided free of charge where private land ownership does not preclude access, though the lands in the project boundary see little use. Hunting is the primary recreational activity that occurs near the project.

Condition satisfied in 2021. Condition 1: The facility Owner shall submit results of the 2020 dissolved oxygen and macroinvertebrate monitoring study reports to LIHI within 60 days of report finalization. Submittals shall include all agency correspondence and consultation related to study results. LIHI reserves the right to modify or rescind the Certification depending on study results. The facility Owner shall provide to LIHI in annual compliance submittals, a summary of all resource agency consultation, and any agency determinations that adaptive management measures are required for ramping rates, dissolved oxygen, macroinvertebrates, or total dissolved gas. The summaries shall include copies of approved adaptive management plans and schedules for their implementation.

Condition 2: The facility Owner shall provide to LIHI in annual compliance submittals, a summary of activities related to the four off-site fish passage mitigation measures until all measures have been installed and related post-construction monitoring has been completed. Submittals shall include all agency consultation during project planning and implementation, and approvals of installed measures.

2021: There were no reported changes or compliance issues. The project remains in compliance based on the annual review. For Condition 1, the project submitted final study reports and agency concurrence on them, thus satisfying the condition.  For Condition 2, the project reported completion of the second fish passage mitigation measure – removal of the Harboldt dam and post removal monitoring. The remaining two culvert replacement projects were delayed but expected to be completed in 2022.

June 2, 2020:  On May 29, 2020 the Low Impact Hydropower Institute (LIHI) preliminarily approved the Prospect No. 3 Project (LIHI #109) for a new 5-year term of Low Impact Certification. This decision is preliminary pending the 30-day appeal window. Only those who commented on the initial application during the 60-day comment period are eligible to file an appeal. Such appeal needs to include an explanation as to how the Project does not meet the LIHI criteria. Appeal requests can be submitted by email to comments@lowimpacthydro.org with “Prospect No. 3 Project” in the subject line, or by mail addressed to the Low Impact Hydropower Institute, 329 Massachusetts Ave, Suite 6, Lexington, MA 02420. All requests will be posted to the website. The applicant will have an opportunity to respond and any response will also be posted. Requests must be received by 5 pm Eastern time on July 2, 2020. The full application and reviewer’s report are available below. If no appeal requests are received and the decision becomes final, the Certification term for the Project will be December 31, 2019 through December 30, 2024.

March 24, 2020: The Low Impact Hydropower Institute (LIHI) has received a complete recertification application from Pacificorp Energy for the Prospect No. 3 Project located on the South Fork of Rogue River in Jackson County, Oregon. The complete application can be found below. LIHI is seeking comment on this application. Comments that are directly tied to specific LIHI criteria (flows, water quality, fish passage, etc.) will be most helpful, but all comments will be considered. Comments may be submitted to the Institute by e-mail at comments@lowimpacthydro.org with “Prospect No. 3 Project Comments” in the subject line, or by mail addressed to the Low Impact Hydropower Institute, 329 Massachusetts Avenue, Suite 6, Lexington, MA 02420. Comments must be received at the Institute on or before 5 pm Eastern time on May 23, 2020 to be considered. All comments will be posted to the web site and the applicant will have an opportunity to respond. Any response will also be posted.

July 27, 2015: LIHI Executive Director Michael J. Sale, using authority delegated from the LIHI Governing Board, has determined that the Prospect No. 3 Hydroelectric Project (FERC No. 2337) continues to meet the LIHI Certification Criteria. The effective certification date for the Prospect No. 3 Project is December 31, 2014 for a five (5) year term, which will expire on December 31, 2019, with the following  condition:

February 3, 2015: The Low Impact Hydropower Institute received a complete and timely application for a new term of Low Impact Certification for the Prospect No. 3 Hydroelectric project on November 20, 2014.  Please see the application files below.

May 22, 2013: UPDATE: PacifiCorp Energy submitted an application for the certification of its Prospect No. 3 Project on December 21, 2009. It was posted to the website on December 31, 2009. An application review was submitted on September 15, 2010, and the report concluded that the Prospect No. 3 project complied with all criteria except for Water Quality. This failure was due to the project’s absence of a 401 Water Quality Certification, but as a result of recent approval from ODEQ, the certification for Prospect No. 3 will likely be considered at the LIHI Governing Board meeting in June 2013.

December 31, 2009: PacifiCorp Energy submitted an application for the certification of its Prospect No. 3 Hydroelectric Project. Application was posted to website and public comment period was opened.