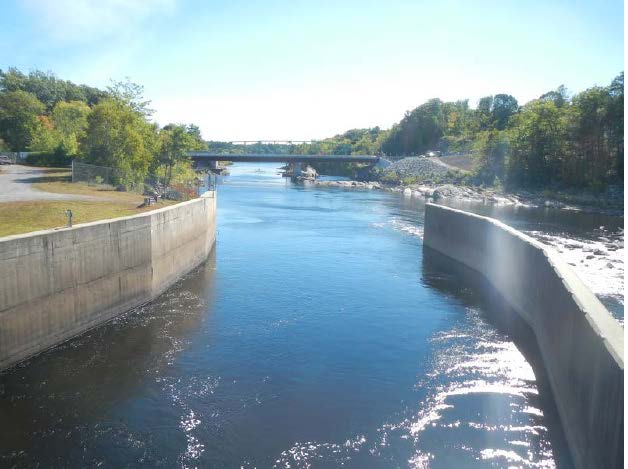 The Androscoggin River drains a watershed of 3,550 square miles and is head-watered in Umbagog Lake in Coos County, New Hampshire. The river flows south for 164 miles and joins the Kennebec River before entering into the Gulf of Maine. Twenty-five major dams have been constructed on the Androscoggin River. Other hydropower projects on the river include Gulf Island-Deer Rips (Deer Rips is LIHI #163), the Riley-Jay-Livermore and Otis projects (LIHI #48), Lewiston Falls, Rumford Falls (LIHI #38), and numerous projects on the Upper Androscoggin. The project was licensed for operation in 1985 and became operational in 1988. Several modifications were made including dam repairs in 1998.

The project includes a dam, gated spillway, non-gated spillway, powerhouse, and two turbines. The non-gated spillway is comprised of two sections: a concrete ogee spillway and a center rock ledge section containing a concrete dike. Both sections have two-foot-high hinged flashboards installed. The gated spillway section is a 520-foot-long concrete spillway with three independently operable pneumatic flashboard sections: seventeen 2.17-foot panels, eight 1.75-foot panels, and twenty-one 2.25-foot panels. This crest gate/flashboard system is designed to fail when overtopped by two feet of water. The power facilities consist of an intake section and an integral powerhouse equipped with two Kaplan bulb turbines and generators with a combined capacity of 19.4 MW.

The project operates in a run-of-river mode and impounds a 190-acre reservoir. The project provides seasonally varied minimum flow releases into the 850-foot-long bypassed reach between the Durham-side dam and the end of the tailrace training wall.

Waters within the project reach are designated as Class C, managed for suitable aquatic habitat, primary and secondary recreation, and drinking water supply after treatment. MDEP has also classified the project reach as impaired from dioxin and legacy PCBs. These impairments have been noted by MDEP as not caused by the project.

The upstream fish passage facility was constructed in 1988 and has been operating since 1990. Passage consists of a vertical lift system with two entrance gates, a connecting gallery, four attraction water pumps, a mechanically operated fish crowder, a cable-operated fish lift, and upper-level canal, a fish counting room, and an automatic control system. The passage facilities are designed to pass migratory species, including American eel, Atlantic salmon, American shad, and river herring. The project’s downstream fish passage facilities include three entrance gates (only one is used based on a study conducted in consultation with agencies in 1999) with trashracks (12-inch clear spacing) located at the surface of the head pond 11.3 feet above the top of the turbine intakes, sectional gates to close individual entrances, a collection gallery between the entrances, a 36-inch-diameter plastic transfer pipe, and a stop log controlled plunge pool that measures 30 feet by 20 feet and is kept at a depth of 10 feet under normal operating conditions. American shad and alewives are the primary utilizers of the project’s passage facilities. Additionally, an upstream American eel passageway was constructed in 2012. The passage is an aluminum cable tray with varying substrate, and a floating trap. Resident fish species in the project area include largemouth bass, smallmouth bass, pickerel, yellow perch, and assorted non-game species such as white sucker and spottail shiner.

The project lands consist of 209 acres. The shoreline in the project area is relatively steep with stable soils. Land use consists of hilly, rural residential areas that include scattered farms and commercial development. A shoreline monitoring program was conducted in consultation with MDEP and USFWS to assess the erosion potential of the reservoir shoreline. The agencies were satisfied with the status of the shoreline stability.

Threatened or endangered species potentially present in the project vicinity include Atlantic salmon, Northern-long eared bat, little brown bat, Eastern small-footed bat, and bald eagle. Consultation with the National Marine Fisheries Service and USFWS concluded that the only critical habitat in the project area is that for Atlantic salmon. MDIFW further concluded that no critical habitat for state-listed species has been identified at the project. Any construction activities or large tree clearing events must have prior consultation with the appropriate state agencies to ensure no adverse impact may be had on listed species.

The nearby Worumbo Mill was once listed in the National Register of Historic Places but after a fire in 1987 destroyed the building, it was removed from the list. There are no other known cultural or historic resources in the project area.

Recreational resources at the project include a boat launch and canoe portage. Public access is provided free of charge.

2021: The project reported initiation of FERC relicensing on November 23, 2020 and no change in status for Conditions 1 and 3. For Condition 2, the project documented compliance with requirements and the passage of one Atlantic salmon. The project remains in compliance based on the annual review.

2018: Annual reporting for the current Certificate has not yet taken effect, however, the project documented submittal to FERC of two minor run-of-river deviations in late 2017 and early 2018 that occurred due to equipment malfunction, and in response to a grid related-request to limit generation, respectively. The project remains in compliance based on the annual review.

October 25, 2018: The decision to recertify the Worumbo Hydroelectric Project is final. No appeals were received during the appeal period which closed on October 13, 2018. The new certification term for the Project is from March 3, 2018 through March 2, 2023.

This decision is preliminary pending the 30-day appeal window. Only those who commented in the initial application during the 60-day comment period are eligible to file an appeal. Such appeal needs to include an explanation as to how the projects do not meet the LIHI criteria. Appeal requests can be submitted by email to comments@lowimpacthydro.org with “Worumbo Hydroelectric Project” in the subject line, or by mail addressed to the Low Impact Hydropower Institute, 329 Massachusetts Ave, Suite 2, Lexington, MA 02420. All requests will be posted to the website and the applicant will have an opportunity to respond and any response will also be posted. Requests must be received by 5 pm Eastern time on October 13, 2018.  The full application and reviewers report are available HERE.

If no appeal requests are received and the decision becomes final, the new term for the Worumbo Project will be March 3, 2018 through March 2, 2023.

July 12, 2018:The Low Impact Hydropower Institute has received a complete application for a new term of Low Impact Certification for the Worumbo Hydroelectric Project (LIHI # 10).

LIHI is seeking public comment on this application.  Specifically, we are interested in knowing whether you think the Project meets the LIHI Low Impact Certification Criteria, as revised in the 2nd Edition Handbook.  Please review the program and criteria in LIHI’s revised Handbook and then review the Project’s 2018 application materials posted below.

Comments that are directly tied to specific LIHI criteria (flows, water quality, fish passage, etc.) will be most helpful, but all comments will be considered.  Comments may be submitted to the Institute by e-mail at comments@lowimpacthydro.org with “Worumbo Project Comments” in the subject line, or by mail addressed to the Low Impact Hydropower Institute, 329 Massachusetts Avenue, Suite 2, Lexington, MA 02420.  Comments must be received at the Institute on or before 5 pm Eastern time on September 10, 2018 to be considered.  All comments will be posted to the web site and the applicant will have an opportunity to respond.  Any response will also be posted.

July 5, 2018: The Worumbo Hydroelectric Project has been granted an extension of the current term through September 30, 2018.

March 13, 2018: The Worumbo Hydroelectric Project has been granted an extension of the current term through July 31, 2018.

May 5, 2014: The certificate term for the Worumbo Project has been extended by the Executive Director to June 30, 2014, in order to allow time to finalize the review of the application for recertification.

May 23, 2013: The Low Impact Hydropower Institute has received an application for recertification of the Worumbo Project.

July 3, 2008: The Worumbo Project was recertified for a second five year term. Miller Hydro Group requested to have the expiration date of their current certification accelerated and to file right away for a renewal of their project. The request was accepted and the existing certificate will expire on the effective date of the new certificate.