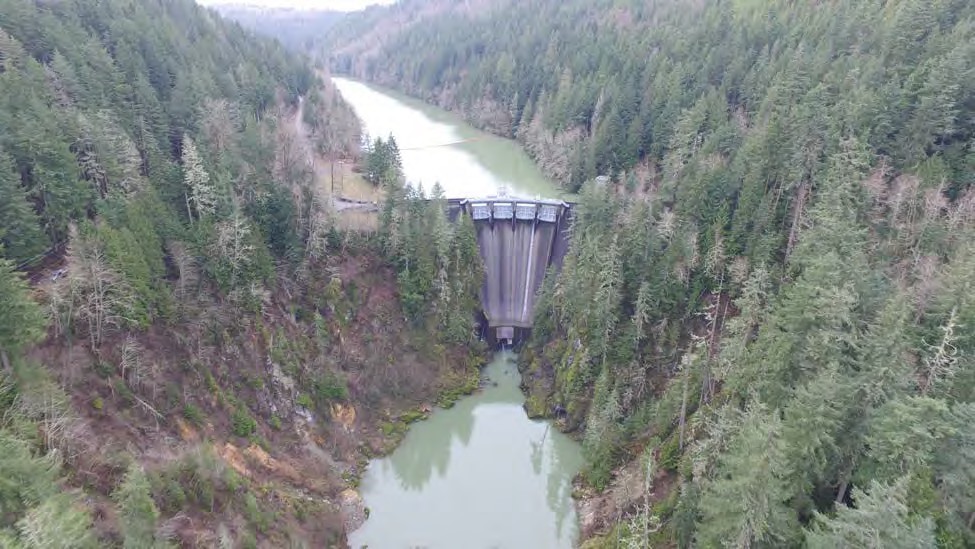 The Nisqually Project is located on the Nisqually River in southwestern Washington and operates across lands in three counties: Pierce, Thurston and Lewis. The Nisqually River originates from the Nisqually Glacier on Mount Rainer and flows approximately 80 miles west to Puget Sound. The project is partially located in the Mount Baker-Snoqualmie National Forest. The project is comprised of two facilities, the LaGrande development and the Alder Dam development. The LaGrande development was completed and began operation in 1912 and the Alder Dam was completed and began operation in 1945.

The Alder facility includes a 285-foot-high concrete arch dam that impounds Alder Lake, a 7.4-mile-long storage reservoir with a maximum surface area of 3,065 acres. Adjacent to the main dam structure is a reinforced concrete spillway channel with a total discharge capacity of 80,000 cubic feet per second (cfs). The Alder powerhouse is located at the base of the dam. The powerhouse contains two generating units with an installed capacity of 64 MW.

The LaGrande facility consists of a 192-foot-high concrete gravity dam impounding LaGrande reservoir, which has a surface area of 45 acres. The LaGrande reservoir is situated in a deep, precipitous canyon, extending a distance of 1.5 miles to the base of Alder dam. LaGrande Dam has a large reinforced concrete spillway with an 80,000-cfs capacity.

The dam diverts flows into a 6,400-foot-long underground tunnel, which terminates at a steel penstock leading to a manifold structure serving five individual penstocks for each of five generating units in the LaGrande powerhouse. The total installed capacity is 50 MW. The 1.7-mile-long LaGrande bypassed reach is situated in a deep gorge between LaGrande Dam and the LaGrande powerhouse.

The project developments operate in separate modes. The Alder facility operates as a peaking project and the LaGrande facility operates in a run-of-river mode, passing all inflow from the Alder impoundment. The Alder facility also provides storage to support late summer critical flows in the downstream reaches. Additionally, flows from the LaGrande facility augment water temperatures to support salmonids in the downstream reach by pulling cold water from deep in the LaGrande impoundment. The project provides flows of 30 cfs continuously into the bypassed reach to enhance salmonid rearing and spawning habitat. This flow regime was developed by the NRCC to enhance river flows and aquatic habitat.

Waters within the project reach are designated supportive of all aquatic life uses, primary contact recreation, water supply, and aesthetics. The mouth of the Nisqually River is listed as impaired for increased water temperatures. The Washington Department of Ecology has concluded that the project does not contribute to the impairment as the deep impoundments help supply cool water to the downstream impaired reaches. Even in a low snowpack year, the project is able to mitigate increased water temperature concerns via cool-water releases from the Alder impoundment. This provides suitable habitat for salmonids and other aquatic species that otherwise may be impacted by increased water temperature. This mitigation was dictated by the NRCC which met frequently during 2015-2016 to ensure proper water quality stewardship.

Historically, several natural barriers in the river have prevented upstream passage access for migratory fish species. These barriers are primarily natural falls and cascades that preclude access to the upstream reaches of the project. Surveys conducted by WDFW and the NRCC concluded that limited suitable habitat along with natural barriers limit the need for upstream passage facilities. Similarly, downstream passage is blocked by natural barriers and separate fish populations occur upstream and downstream of the project. Species found downstream of the project are supported by increased flows from the project and temperature mitigation measures discussed above further support fish populations and habitat. Downstream species include Chinook, coho, and pink salmon, steelhead/rainbow trout, and cutthroat trout. Species found in the Alder impoundment include kokanee, rainbow trout, cutthroat trout, largemouth and smallmouth bass, yellow perch, black and white crappie, and channel catfish.

The project lands consist of roughly 7,600 acres. The includes more than 3,350 acres acquired and reserved by the project owner-designated the Nisqually Wildlife Management Area. A wildlife management plan was developed in consultation with WDFW, USFWS, and the Nisqually Tribe to protect, mitigate, and enhance the shoreline around the project. The plan includes descriptions of land parcels in the management area, prescriptions for management of wildlife habitat, monitoring and evaluating the effectiveness of the measures, and a schedule for revising the plan and implementing its measures. Each year the project owner prepares an annual report which contains the status of the plan measures and activities that occurred during the previous year. The project owner partners with the South Puget Sound Salmon Enhancement Group and the Nisqually Indian Tribe to provide large woody debris (LWD) from reservoir clean-out operations free of charge for restoration projects on the Mashel River and Ohop Creek, two important salmon-bearing tributaries to the lower Nisqually downstream of the project. The project owner also partners with the Nisqually Indian Tribe by funding conifer plantings on 87 acres of riparian habitat on the wildlife lands. Plantings cover approximately 15 acres per year for six years. The plantings are intended to be a future source of LWD recruitment into the Nisqually River to help maintain and improve fish habitat. While they grow and mature, these conifer understory plantings also increase habitat diversity that provides a long-term benefit to a variety of terrestrial species.

Threatened or endangered species potentially present in the project vicinity include the Chinook salmon, steelhead trout, gray wolf, grizzly bear, Northern spotted owl, and marbled murrelet. The only species found in the project area are the Chinook salmon and steelhead trout. No other listed species have been observed in or near the project area though all suitable terrestrial habitat is protected under the project’s wildlife management plan noted above. The project provides minimum flows to support downstream salmonid habitat and supplies LWD for use in restoration projects in the Nisqually River tributaries.

The project owner has consulted with the State Historic Preservation Office (SHPO) to determine if any cultural or historic resources may be found in the project area. The SHPO has concluded that no known prehistoric cultural resource sites, historic buildings, or structures are currently present on project lands. The project owner consults with the SHPO prior to conducting any ground disturbing activities.

August 8, 2019: The decision to recertify the Nisqually Hydroelectric Project is final. No appeals were received during the appeal period which closed on May 11, 2019. The certification term for the Project is from April 15, 2018 through April 14, 2023.

This decision is preliminary pending the 30-day appeal window. Only those who commented on the initial application during the 60-day comment period are eligible to file an appeal. Such appeal needs to include an explanation as to how the Project does not meet the LIHI criteria. Appeal requests can be submitted by email to comments@lowimpacthydro.org with “Nisqually Hydroelectric Project” in the subject line, or by mail addressed to the Low Impact Hydropower Institute, 329 Massachusetts Ave, Suite 6, Lexington, MA 02420. All requests will be posted to the website.  The applicant will have an opportunity to respond and any response will also be posted. Requests must be received by 5 pm Eastern time on May 11, 2019.  The full application and reviewers report are available below.

December 10, 2018: The Low Impact Hydropower Institute has received a complete application for Low Impact Re-certification of the Nisqually Hydroelectric Project.  LIHI is seeking public comment on this application.  Specifically, we are interested in knowing whether you think the Project meets the LIHI Low Impact Certification Criteria, as revised in the 2nd Edition Handbook.  Please review the program and criteria in LIHI’s revised Handbook and then review the Project’s application materials below.

Comments that are directly tied to specific LIHI criteria (flows, water quality, fish passage, etc.) will be most helpful, but all comments will be considered.  Comments may be submitted to the Institute by e-mail at comments@lowimpacthydro.org with “Nisqually Project Comments” in the subject line, or by mail addressed to the Low Impact Hydropower Institute, 329 Massachusetts Avenue, Suite 2, Lexington, MA 02420.  Comments must be received on or before 5 pm Eastern time on February 8, 2019 to be considered.  All comments will be posted to the web site and the applicant will have an opportunity to respond.  Any response will also be posted.

March 12, 2014: The City of Tacoma’s Nisqually River Hydroelectric Project has been recertified for a third five year term of low impact certification. The effective certification date is April 15, 2013 and it will expire April 15, 2018.

May 15, 2013: LIHI has received an application for recertification of the Nisqually River Hydroelectric Project. The application can be found below in the “Files” section.

August 28, 2008: The Nisqually River Hydroelectric Project has been recertified for a second five year term of low impact certification, as it continues to meet all of LIHI’s eight environmentally rigorous criteria addressing river flows, water quality, fish passage and protection, watershed health, endangered species protection, cultural resources, recreation use and access, and whether or not the dam itself was recommended for removal.

September 17, 2003: The Nisqually River Hydroelectric Project has been certified as low impact for a five year term, effective April 15, 2003 and expiring April 15, 2008. It is the third hydropower facility to earn LIHI certification in Washington State, and the eighth nationwide.