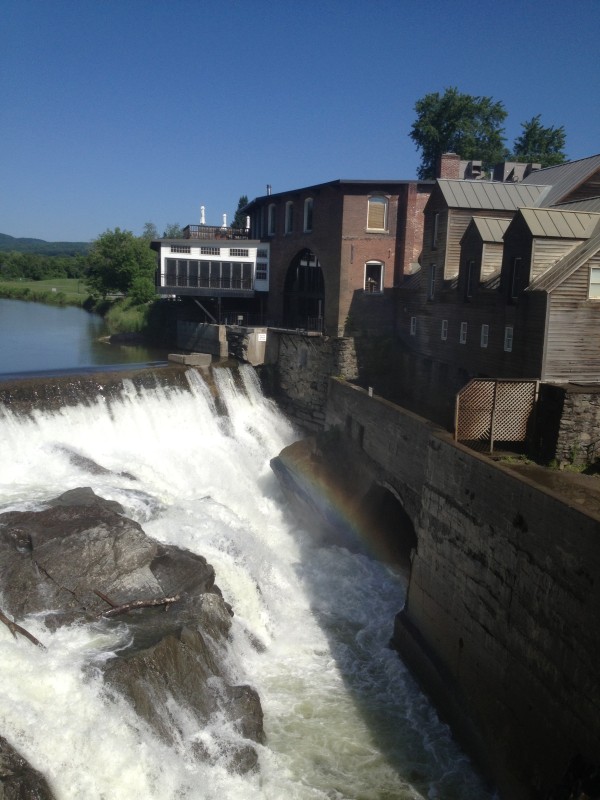 The Downer’s Mill Project is located on the Ottauquechee River at Quechee Village in the town of Hartford, Vermont. The project was constructed at the site of the existing Emory Mill dam (aka Downer’s Mill). The dam was built in the early 1800s to power a grist mill. The project generating unit was put back into service in the 1980s to provide power for Simon Pearce Inc.’s glass blowing business. Excess power is sold to Green Mountain Power Corporation.

The concrete gravity dam is 185 feet long with an uncontrolled spillway. The crest elevation of the dam is 562 feet NGVD and is about 14 feet above the bedrock streambed at the downstream toe. The powerhouse, located in the basement of the mill building, houses a single vertical Kaplan turbine/generator with an installed capacity of 500 kW. At full pool, the impoundment extends about 0.4 miles upstream to an island and covers approximately nine acres with an average depth of about six feet. There is a short bypassed reach, about 105 feet long.

The project operates in a run-of-river mode. Inflow to the project is controlled by the discharge from the upstream Taftsville project and inflow from small tributaries. The project provides a minimum flow of 22 cfs. The flow regime was developed with the Vermont Agency of Natural Resources to protect aquatic biota, habitat, and water quality.

Waters within the project reach are designated as Class B, suitable for aquatic biota, primary contact recreation, public water supply after treatment, and aesthetic quality. The river downstream of the project is considered stressed for several uses due to nutrients, organic enrichment, temperature, sediment, and E. coli. The project is not contributing to these stressors which are likely caused from runoff from roads and developed land, and a nearby golf course, septic systems, and fertilized turf.

The project lands consist of 1.7 acres. The project is located in the developed Quechee village with surrounding land uses including a golf course, steep banks and rock outcroppings, and a rocky downstream reach. A vegetated buffer is located in the less developed area farther from the river. Some residences and mill buildings are located nearby. No lands of significant ecological value or critical habitat exist in the project vicinity.

The mill building in which the project is located is a contributing feature in the Quechee Historic Mill District which is listed on the National Register of Historic Places. The history of the mill building was provided in the project’s 2021 LIHI recertification application:

“John Downer & Co. bought the land around the mill in 1825 and built a six-story brick building overlooking the dam. But the mill failed financially and changed hands several times. In 1840, Francis K. Nichols & Co. became the first mill in the country to manufacture a fabric of reused soft rags and new wool, known as “shoddy.” J.C. Parker owned the mill from 1857 to 1906 which reportedly became the largest United States producer of fine, white, soft flannel for baby clothes. The mill building underwent several structural changes over the years. High water caused the north wing to collapse in 1869. It was rebuilt in 1870, including a three-story brick addition. Harris, Emery Company enlarged the mill in 1915, replacing the wing attached to the1870 addition with a new drying room and sales area and enlarging the weaving room. In 1926, a cement dam was built to replace the wooden crib dam. Harris, Emery closed the mill in 1951. It changed hands a few times and ended up owned by John Cone, Sr. in the 1950s. Cone considered the upper floors of the building and the eastern wing a safety hazard and had them demolished. Quechee Lakes Corporation bought the building in 1969 and added the wooden annex on the east end. In 1980, Simon Pearce bought the building, renovated the inside for a glass blowing operation, and added the hydroelectric plant in 1982.”

Recreational resources at the project include a canoe portage via Quechee Main Street which parallels the river above and below the dam. The put-in and take-out are located outside the project boundary. Public access is provided free of charge where safety concerns do not preclude access.

August 10, 2021: The Low Impact Hydropower Institute has issued a final decision on the recertification of the Downer’s Mill Project located on the Ottauquechee River in Vermont. The 30-day appeal window closed on August 7, 2021 and no appeals were filed. Therefore, the decision to recertify the project is now final. The new term is March 3, 2020 through March 2, 2025.

This decision is preliminary pending the 30-day appeal window. Only those who commented on the initial application during the 60-day comment period are eligible to file an appeal. Such appeal needs to include an explanation as to how the Project does not meet the LIHI criteria. Appeal requests can be submitted by email to comments@lowimpacthydro.org with “Downer’s Mill Project” in the subject line, or by mail addressed to the Low Impact Hydropower Institute, 1167 Massachusetts Ave, Office 407, Arlington, MA 02476. All requests will be posted to the website. The applicant will have an opportunity to respond and any response will also be posted. Requests must be received by 5 pm Eastern time on August 7, 2021. The full application and reviewer’s report are available below.

If no appeal requests are received and the decision becomes final, the Certification term for the Project will be March 3, 2020 through March 2, 2025.

April 20, 2021: The Low Impact Hydropower Institute (LIHI) has received a complete recertification application from Simon Pearce (U.S.), Inc. for the Downers Mill Project located on the Ottauquechee River in Vermont. The complete application can be found below.

LIHI is seeking comment on this application. Comments that are directly tied to specific LIHI criteria (flows, water quality, fish passage, etc.) will be most helpful, but all comments will be considered. Comments may be submitted to the Institute by e-mail at comments@lowimpacthydro.org with “Downers Mill Project Comments” in the subject line, or by mail addressed to the Low Impact Hydropower Institute, 1167 Massachusetts Avenue, Office 407, Arlington, MA 02476. Comments must be received at the Institute on or before 5 pm Eastern time on June 19, 2021 to be considered. All comments will be posted to the web site and the applicant will have an opportunity to respond. Any response will also be posted.

July 27, 2015: LIHI Executive Director Michael J. Sale, using authority delegated from the LIHI Governing Board and a full review of the Application Reviewer’s report and all public comments and additional materials provided by the Applicant, has determined that the Downer’s Mills Hydroelectric Project (FERC No. 5195-001) satisfies the LIHI Certification Criteria. The Downer’s Mill certification is effective as of March 3, 2015 for a five (5) year term, which will expire on March 3, 2020, with the following conditions:

March 6, 2015: On March 3, 2015, the Low Impact Hydropower Institute (LIHI) received a timely and complete application from Simon Pearce (U.S.) Inc., for the Low Impact Certification of the Downer’s Mills Project, FERC P-5195-001, located on the Ottauquechee River in Vermont.