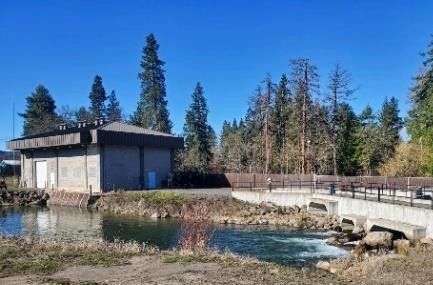 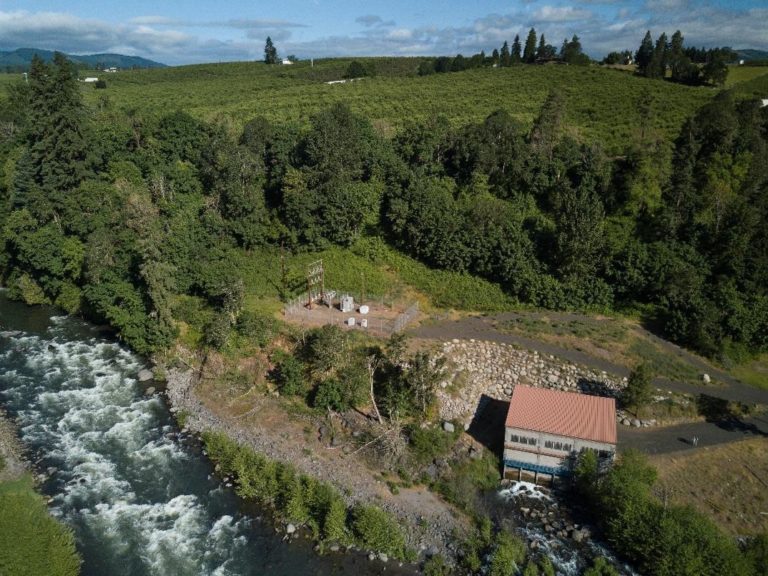 Farmers Irrigation District Hydroelectric Projects are located on canals discharging to the main stem of the Hood River near the Columbia River Gorge about 60 miles west of Portland, Oregon. The project, including penstocks and powerhouses, were constructed in the mid-1980s to produce renewable energy for the Bonneville Power grid and provide revenue to the District to be used for water conservation, stream restoration, and fish screen projects. The mainstem Hood River diversion was originally constructed in the1800s for irrigation. The diversion stemwall was rebuilt in 2007 after being destroyed in a debris flow. The only dam downstream of the Hood River confluence is the US Army Corps of Engineer’s Bonneville Dam.

The project includes two hydropower powerhouses connected through a penstock, two forebays, and two turbines. The projects are run-of-river, and no dams are associated with the six water diversion systems. Water flows to the upper powerhouse (Plant No. 3) forebay through the 10-mile long Lowline canal and pipe system; water to the lower plant (Plant No. 2) forebay flows through the 5-mile-long Farmers canal and pipe system. The project has no reservoir storage other than the forebay, canal, and pipe systems. A 5-mile long, 36-inch diameter penstock provides water to the upper turbine, and a 2-mile long, 48-inch diameter penstock conveys water to the lower turbine. Water from the upper plant also flows through the lower plant. Farmers Irrigation District owns the project facilities and holds easements for the canals, pipes, forebays, penstocks, and transmission lines.
The project operates in run-of-river mode and is located on water conduits. Up to 35 cfs of water is conveyed from Forebay 3 into Plant 3 via a reinforced steel penstock. The powerhouse contains one Pelton style turbine with an installed capacity of 1.8 MW. During irrigation season, water is diverted for irrigation use before reaching Forebay 3, resulting in decreased flows through Plant 3. Up to 108 cfs of flow from Plant No. 3 is conveyed into Forebay 2 and Plant No. 2 which contains one Gilkes Turgo style turbine installed in 2015 replacing two older Francis units, and now has an installed capacity of 2.6 MW.

The project monitors water temperature and provides shutdown periods for fish populations and water quality, and maintains minimum flows based on a Memorandum of Agreement (MOA) developed with Oregon Department of Environmental Quality (ODEQ) and Oregon Department of Fish and Wildlife (ODFW).

Waters within the project reach are on an existing irrigation water conduit with no fish and wildlife resources or human water uses. Waters in the Hood River in the project vicinity are listed as impaired for copper, iron, lead, and thallium which are not caused, or exacerbated by, project operations. ODEQ has noted its support of project certification as long as the project continues to operate in accordance with the MOA to determine the effects of the project on water temperature in the Hood River. Temperature monitoring occurs at several locations upstream and downstream of the project and summary reports are submitted annually to ODEQ.

PLUS-Standard: All of the project diversions are screened, and the main channel diversions use an off-channel horizontal fish screen that the project owner developed in the early 2000s. After testing, the screen was approved by resource agencies. Smaller diversions in the area are being upgraded to the same screen technology as money allows. While migratory species can bypass the screens via the fish return channel, the off-channel screening helps to maintain upstream fish passage in the main channel Hood River. The screens were tested and found to be effective for downstream passage in canal systems. Farmers Conservation Alliance, a local nonprofit organization, was given license for the technology in 2006 with the agreement to market the new screen technology and to invest any excess revenue into developing other technologies that benefit both the environment and agriculture. The screen design uses hydraulics to manage debris and protect fish. It has no moving parts and does not require power to operate. Off-channel screening predominately means upstream passage is maintained in the natural stream channel, but migratory fish are capable of passing the screens upstream if they access the fish return channel.

The project lands consist of roughly 2 acres. Lands surrounding the project do not have any significant ecological value.

Threatened or endangered species potentially present in the project vicinity include summer and winter steelhead, spring and fall run chinook salmon, coho salmon, and bull trout. As the project is located on existing irrigation conduits, fish are excluded from project facilities. Releases from the project are monitored for water quality which are cooler than the mainstem Hood River and has resulted in more ideal habitat for the listed species. Watershed enhancement projects mentioned above have also targeted restoring habitat for the listed species. The mainstem hydropower diversion is shut down from August 16-30, a high priority timeframe for fish population and stream temperature.

Due to the small footprint of the project, no cultural or historic resources are found in the project area. Additionally, the project does not have any recreation amenities due to its restricted nature. Safety concerns preclude access as much of the equipment is high-voltage and otherwise sensitive and unsafe for public use.

2022: No material changes or compliance issues were identified. The project remains in compliance based on the annual review. For condition 1, the project reported no operational modifications were conducted.

This decision is preliminary pending the 30-day appeal window. Only those who commented on the initial application during the 60-day comment period are eligible to file an appeal. Such appeal needs to include an explanation as to how the Project does not meet the LIHI criteria. Appeal requests can be submitted by email to comments@lowimpacthydro.org with “Farmers Irrigation District Project” in the subject line, or by mail addressed to the Low Impact Hydropower Institute, 329 Massachusetts Ave, Suite 6, Lexington, MA 02420. All requests will be posted to the website. The applicant will have an opportunity to respond and any response will also be posted. Requests must be received by 5 pm Eastern time on July 18, 2020. The full application and reviewer’s report are available below.

If no appeal requests are received and the decision becomes final, the Certification term for the Project will be March 25, 2019 through March 24, 2029.

March 31, 2020:  The Low Impact Hydropower Institute has received a complete application for Low Impact Recertification of the Farmers Irrigation District Hydroelectric Project.  LIHI is seeking public comment on this application.  Specifically, we are interested in knowing whether you think the Project meets the LIHI Low Impact Certification Criteria, as revised in the 2nd Edition Handbook.  Please review the program and criteria in LIHI’s revised Handbook and then review the Project’s application materials below.

Comments that are directly tied to specific LIHI criteria (flows, water quality, fish passage, etc.) will be most helpful, but all comments will be considered.  Comments may be submitted to the Institute by e-mail at comments@lowimpacthydro.org with “Farmers Irrigation District Project Comments” in the subject line, or by mail addressed to the Low Impact Hydropower Institute, 329 Massachusetts Avenue, Suite 6, Lexington, MA 02420.  Comments must be received on or before 5 pm Eastern time on May 30, 2020 to be considered.  All comments will be posted to the web site and the applicant will have an opportunity to respond.  Any response will also be posted.

January 27, 2014: The Low Impact Hydropower Institute has received an application from Farmers Irrigation District for a second term of certification. The application materials are available in the “Files” section below.

March 25, 2009: The Farmers Irrigation District has submitted an application for certification of its small-scale hydroelectric project. A public comment period will remain open for 60 days, ending on May 25, 2009.