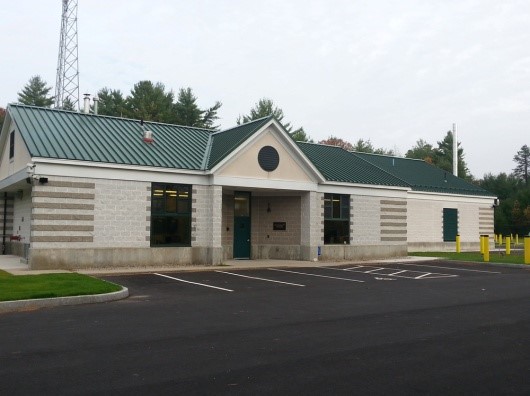 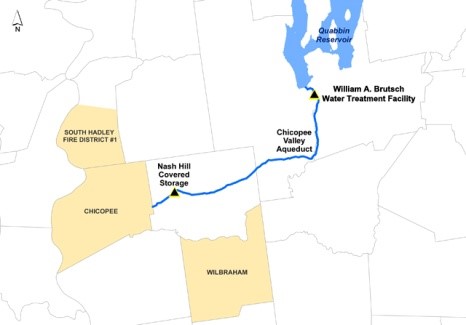 The CVA Fish Hatchery Project is located at the Brutsch Treatment Facility in the town of Ware, Massachusetts. It is not associated with a dam on a river. The hydropower facility is owned and operated by the Massachusetts Water Resources Authority (MWRA). The MWRA is a public instrumentality and a Commonwealth of Massachusetts authority, charged with providing water and sewer services. The facility uses a pipeline or water conveyance that is operated for the distribution of water for agricultural, municipal, or industrial consumption and not primarily for the generation of electricity.

The facility was constructed in 2016 – 2017 and became operational in August 2017. The distribution of water to the fish hatchery is the primary purpose of the project. Water is conveyed to the hydro facility from the MWRA’s existing Chicopee Valley Aqueduct (CVA), which is a large diameter water supply transmission main approximately 15 miles long and 48 inches (upper section) and 36 inches (lower section) in diameter. The CVA begins at MWRA’s Quabbin Reservoir, a massive water supply reservoir with 412 billion gallons of storage.

The project is a conduit hydropower facility associated with a 4,700-foot pipeline constructed off of the MWRA’s existing CVA pipeline that terminates at the MA Department of Fisheries and Wildlife McLaughlin Fish Hatchery. To convey water to the hatchery, the CVA conveys an additional 9.3 cfs (6 mgd), on top of the water that the CVA already conveys to downstream communities. Flow to the hatchery does not change other operational parameters.

The water supply, transmission and distribution system associated with this conduit project include: The CVA aqueduct, which was constructed in 1949, while the new conduit is a side service connection to the Hatchery. It has a 20-inch pipeline that taps raw water off of the CVA on the grounds of MWRA’s Brutsch Water Treatment Plant. Downstream of MWRA’s property, the 20-inch pipeline is under the care and control of the Massachusetts Department of Fish and Wildlife. The length of the CVA between the intake and the Brutsch Treatment facility/tap to the hatchery pipeline is 3,200 feet. The length of pipe between the tap at the CVA for the hatchery pipeline and the powerhouse is 420 feet. The powerhouse is located at the MWRA Ware Disinfection Facility and houses a single turbine-generator Francis unit with an installed capacity of 65 KW. The power produced is distributed to the electrical grid and generates income for MWRA.

The project is a conduit facility that conveys 9 cfs continuously except during periods of drought or MWRA operational constraints. After flowing through the project, waters are mixed with flows to the fish hatchery.

The project’s conduit nature does not affect water quality. Raw water, or water prior to treatment, is fed to the facility from the CVA and subsequently to the hatchery. Waters used at the hatchery are eventually discharged to the Swift River and no physical, chemical, or biotic water characteristics are changed.

The project does not create a barrier to upstream passage nor are there any migratory fish affected by the water flowing through the conduit project, a manmade structure not associated with a river.

The project does not have any shoreline and the land surrounding the project is a protected area (Quabbin Park) controlled by the Massachusetts Department of Conservation and Recreation, Division of Water Supply Protection.

Threatened and endangered species potentially within the project property include wood turtle. The project is within a Priority Habitat of Rare Species and Estimated Habitat of Rare Wildlife for the species. Review conducted under the Massachusetts Endangered Species Act found that conduit facility would not affect the wood turtle and mitigation measures were incorporated into construction plans when the project was constructed.

The Massachusetts Historical Commission conducted a review which determined that the project has no adverse impact on cultural or historic resources.

The project is located at a secure, fenced in area and public access is not allowed.

2017: Annual reporting for the current Certificate has not yet taken effect although the project reported an in-service date of August 14, 2017.

November 21, 2017: On August 14, 2017, the CVA Fish Hatchery was officially recognized by ISO NE as being on-line. Having completed the appeal period for the preliminary decision on January 28, 2017 with no requests for appeal, and now having completed construction and generating electricity, CVA Fish Hatchery’s Certification term dates are August 14, 2017 through August 13, 2027.

December 23, 2016: LIHI Executive Director, Shannon Ames, using authority delegated from the LIHI Governing Board, has issued a Preliminary Certification Decision that the Chicopee Valley Aqueduct (CVA) Fish Hatchery Hydroelectric Project (FERC No. CD14-8-000) satisfies the LIHI Certification Criteria. Because the application satisfies the “Not Applicable/De Minimis Effects” standards for all certification criteria and is qualified as a “Very Low Impact” project, the certification term will be for 10 years. Once final, the effective certification date for the CVA Fish Hatchery Project is TBD – pending date of operation. As provided for in Section 4.2.5 of the LIHI 2nd Edition, the Preliminary Certification Decision to certify, along with the Application Reviewer’s report and (if prepared) report of the Executive Director, will be posted on the Institute’s Web page for 30 days.  Notice of the posting will be provided to all individuals or organizations that commented on the initial Application Package. Any Commenter may submit a letter to the Executive Director requesting an appeal within the 30-day period, which begins on December 29, 2016 and ends on January 29, 2017.  The appeal request must state specific reasons why the hydropower facility should have failed one or more criteria.  If an individual or organization did not comment on the initial Application Package, they may not file an appeal. If no appeal is requested within the 30-day period, the Executive Director will issue LIHI Certification for the facility and post a notification of certification on the Institute’s website.

October 21, 2016: LIHI received a comment letter from the Department of Fish and Game in regards to the certification of the CVA Fish Hatchery Project. The letter can be found in the Files section below.

October 11, 2016: On September 28, 2016, the Low Impact Hydropower Institute (LIHI) received a complete application from Massachusetts Water Resources Authority for the Low Impact Certification of the Chicopee Valley Aqueduct (CVA) Fish Hatchery Project, FERC No. CD14-8-000, located in the Chicopee River Basin in the town of Ware, Hampshire County, Massachusetts. This application is filed under the 2nd Edition Handbook, Revised March 2016. LIHI is seeking public comment on this application.  Specifically, we are interested in knowing whether you think the CVA Fish Hatchery project meets the LIHI Low Impact Certification Criteria.  Please review the program and criteria in LIHI’s 2nd Edition Handbook and then review the Project’s 2016 application materials posted on the project page.  Comments that are directly tied to specific LIHI criteria (flows, water quality, fish passage, etc.) will be most helpful, but all comments will be considered.  Comments may be submitted to the Institute by e-mail at comments@lowimpacthydro.org with “CVA Fish Hatchery Project Comments” in the subject line, or by mail addressed to the Low Impact Hydropower Institute, PO Box 194, Harrington Park, New Jersey 07640.  The comment period begins on October 19, 2016.  Comments must be received at the Institute on or before 5 pm Eastern time on December 18, 2016 to be considered.  All comments will be posted to the web site and the applicant will have an opportunity to respond.  Any response will also be posted.