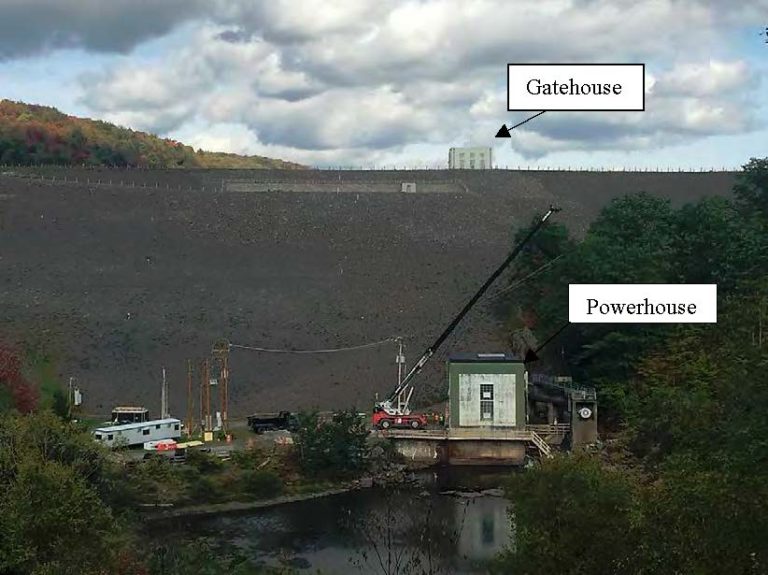 The Waterbury Project is located on the Little River in the town of Waterbury, in Washington County, Vermont. It is the only hydroelectric plant on the Little River, a major tributary of the Winooski River, which flows to Lake Champlain. The Waterbury reservoir was built by the U.S. Army Corps of Engineers (USACE) for the purpose of flood control in the Winooski River Valley following the flood of 1927, one of the most destructive natural disasters in the state’s history. Although the Waterbury Dam and reservoir were built by the USACE in 1938, they are owned by the State of Vermont. The project’s hydroelectric facilities were constructed beginning in 1951 and were completed in 1953. Operations began the same year. The project is owned by Green Mountain Power (GMP), the first energy utility certified as a B-Corporation.

The Waterbury Hydroelectric Project utilizes storage created by the Waterbury Dam (owned and managed by the State of Vermont). GMP retains ownership of the hydroelectric generation related facilities including the powerhouse, substation, and lower portion of the penstock where it enters the powerhouse. GMP does not own the dam, spillway, tainter gates, intake, gatehouse, reservoir, tunnel, or upper penstocks which are owned and managed by the State of Vermont for flood control and other purposes and are not components of GMP’s Waterbury Hydroelectric Project.

The Project includes an intake structure, horseshoe-shaped tunnel connected to penstocks, a bypass penstock, and the transmission lines from the powerhouse to the adjacent substation. The gatehouse is part of the USACE dam structure.

The project is comprised of a submerged concrete intake structure, a broom gate, and a 14-foot-wide,10.5-foot-high, by 828-foot-long horseshoe shaped, reinforced concrete conduit (tunnel) that extends from the intake. Flow from the conduit enters two 205-foot-long, 4.5-foot-diameter penstocks. Inside the conduit house, these two pipes connect to a 79-inch diameter penstock, which supplies water to the powerhouse, and to a 60-inch diameter bypass pipe, which is fitted with a Howell-Bunger valve located to the east of the powerhouse.

A butterfly valve is located on the 60-inch bypass pipe and allows it to be opened and closed independently of the generating turbine. Downstream of the butterfly valve, the bypass pipe bifurcates and terminates in two cone valves which are adjustable to allow for downstream release of a range of flows from 0 to at least 250 cfs combined from the two valves.

The 58-foot-long by 35-foot-wide powerhouse contains a single turbine-generator unit with a capacity of 4.1 MW (however the Project’s license authorizes 5.52 MW capacity).

The Project Water Quality Certificate (WQC) specifies a phase-in of the reservoir and flow management requirements, with three Stages specified. Stage II requirements are currently in place. As specified by Condition C of the WQC, Stage II operational requirements took effect in May 2018 upon completion of recently licensed infrastructure improvements. Stage II operation requires modified run-of-river operation from Mid-May through December, using the bypass pipe and cone valves plus the turbine to match outflow to inflow within the hydraulic range of the equipment. A winter drawdown and spring refill is allowed. Stage II requires maintaining reservoir levels from the completion of spring refill through the start of winter drawdown except when elevated due to inflows in excess of capacity.

Condition C of the WQC indicates that Stage III requirements for run-of-river operation will take effect within 30 days after the reservoir spillway is replaced, including Tainter gate repairs, and when the Department of Environmental Conservation determines, after consultation with the federal government, that Stage III operations may be safely implemented. A timeline for when this Stage will occur has not yet been determined.

PLUS-Standard Option: GMP is implementing advanced technologies to enhance dissolved oxygen and adaptive management under a Tailrace Dissolved Oxygen Enhancement and Monitoring Plan. Upon completion, the project will have the potential for a Plus-Standard.

Though agencies reserve their right to prescribe passage facilities at the project, there are currently no migratory fish species present in the project reach. Vermont Agency of Natural Resources (VANR) manages the reach for self-supporting populations of resident and cold-water fish, including brook, brown, and rainbow trout. The reservoir also supports these species as well as rainbow smelt, smallmouth bass, and yellow perch. The river reach downstream of the project supports trout, dace, suckers, and sculpin.

The project lands consist of roughly 4 acres. This does not include the reservoir or dam as these facilities are owned by the State of Vermont with continued federal oversight. Only the hydroelectric generation facilities are included as project lands.

Instances of natural erosion have been documented in the reservoir and downstream of the project. Resource agencies determined that run-of-river operations under Stage III operations will not contribute to continued erosion.

Threatened or endangered species potentially present in the project vicinity include the Northern Long-eared Bat. The bat species is not known to occur in the project area nor are critical habitats present. Given the project’s limited footprint, it is unlikely the project has effect on the species.

The project infrastructure, including the powerhouse and appurtenant structures, as well as the USACE dam, are all eligible for listing on the National Register of Historic Places. Surveys have been conducted to identify sites of historic, prehistoric, or cultural significance but none were identified, most likely due to the massive ground disturbing activities associated with the original dam construction. GMP submits annual reports to the State Historic Preservation Officer summarizing any projects completed at the site.

The lands surrounding the project are nearly all owned by the State of Vermont. Recreational resources include camp sites for RVs and tents, hiking and mountain biking trails, swimming areas, several boat launches, and picnic facilities. These facilities are housed in several state parks managed by the Vermont Department of Forest Parks and Recreation. Additionally, GMP installed three boat launches and developed a recreational trail to enhance recreational opportunities in the local area.

This decision is preliminary pending the 30-day appeal window. Only those who commented on the initial application during the 60-day comment period are eligible to file an appeal. Such appeal needs to include an explanation as to how the Project does not meet the LIHI criteria. Appeal requests can be submitted by email to comments@lowimpacthydro.org with “Waterbury Hydroelectric Project” in the subject line, or by mail addressed to the Low Impact Hydropower Institute, 329 Massachusetts Ave, Suite 2, Lexington, MA 02420. All requests will be posted to the website.  The applicant will have an opportunity to respond and any response will also be posted. Requests must be received by 5 pm Eastern time on March 8, 2019.  The full application and reviewers report are available below.

If no appeal requests are received and the decision becomes final, the Certification term for the Project (pending LIHI #148) will be November 16, 2018 through November 15, 2023 with an option to extend the term three years to November 15, 2026.

November 20, 2018: The Low Impact Hydropower Institute has received a complete application for Low Impact Certification of the Waterbury Hydroelectric Project (FERC No. 2090). The Project is located on the Little River in the in the town of Waterbury, Washington County, Vermont.

Comments that are directly tied to specific LIHI criteria (flows, water quality, fish passage, etc.) will be most helpful, but all comments will be considered.  Comments may be submitted to the Institute by e-mail at comments@lowimpacthydro.org with “Waterbury Project Comments” in the subject line, or by mail addressed to the Low Impact Hydropower Institute, 329 Massachusetts Avenue, Suite 2, Lexington, MA 02420.  Comments must be received on or before 5 pm Eastern time on January 19, 2019 to be considered.  All comments will be posted to the web site and the applicant will have an opportunity to respond.  Any response will also be posted.