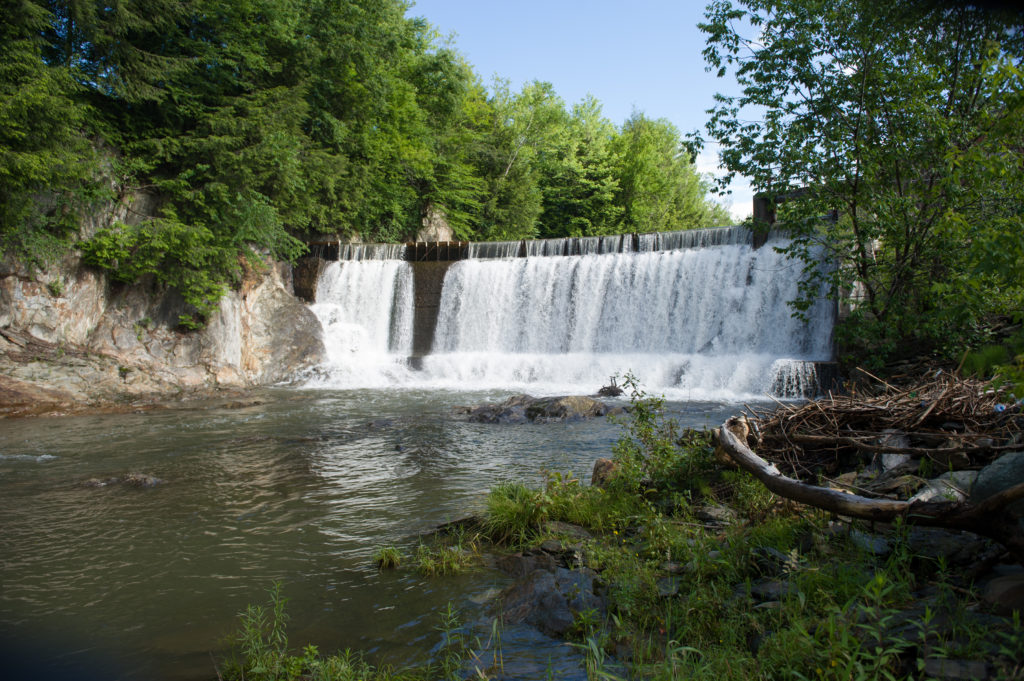 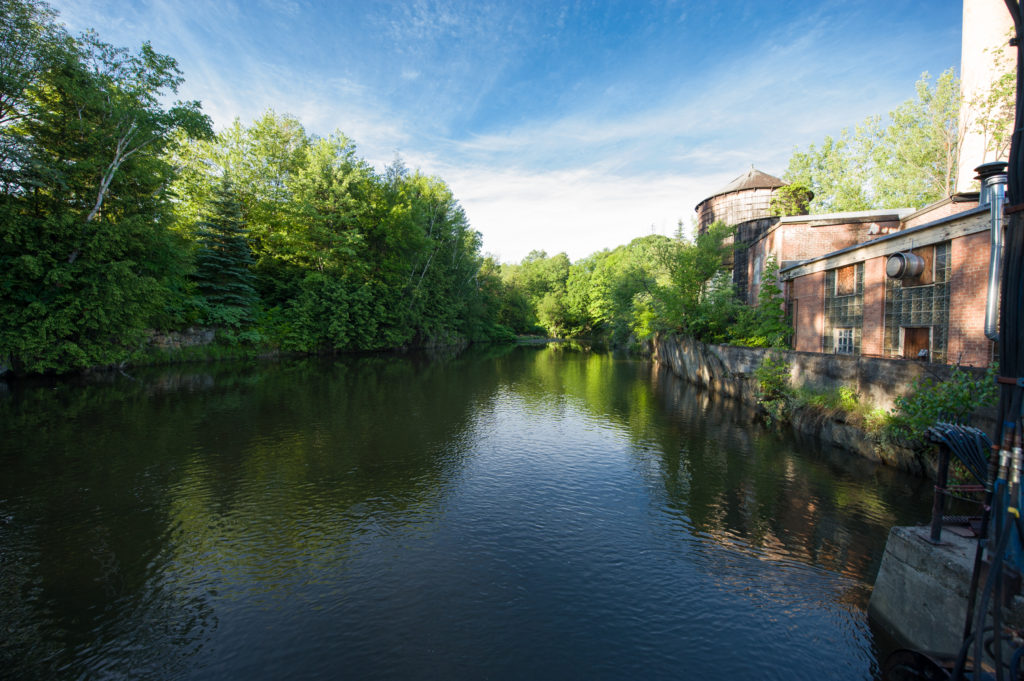 The Dog River Hydroelectric Project is located at river mile 11.8 on Dog River in Northfield, Vermont, in the Nantanna Mill complex, and powered by the Dog River and hydrology of the Green Mountains. In 1984, the Federal Energy Regulatory Commission (FERC) issued an exemption for this non conduit facility, P-6757.

There are three partially breached dams downstream and at least two partially breached dams upstream. This project operates in run-of-river mode. The project is required by FERC to provide 5 cfs continuous minimum flow; however, the project provides 20 cfs to the bypass section below the dam through a permanent notch in the flashboards, or maintaining 0.2′ of flow over the crest of the boards.

The hydro facility’s water intake sits beneath a protective screening of trash racks, flow then moves through a 7 ft diameter steel penstock with 25 ft of gross head before meeting 2 Kaplan turbines in the powerhouse. The water reunites with the Dog River about 130 ft downstream of the project’s reinforced concreate dam via an unlined, earthen channel. The Dog River Hydroelectric Project operates in a run-of-river manner, generating approximately 650,000 kilowatt-hours of clean, predictable energy each year. Gravity Renewables is dedicated to the preservation of Dog River Hydro and its contributions of renewable energy to the community.

As provided for in Section 4.2.5 of the LIHI 2nd Edition Handbook, notice of the preliminary decision to certify was posted on the Institute’s website and sent to the stakeholder email distribution list on February 7, 2017. A 30-day period was provided to anyone who commented on the original application to request an appeal, and no requests for appeal were received.

Any Commenter may submit a letter to the Executive Director requesting an appeal within the 30-day period which begins on February 7, 2017 and ends on March 7, 2017.  The appeal request must state specific reasons why the hydropower facility should have failed one or more criteria.  Only individuals or organizations that commented on the initial Application Package may file an appeal.

If no appeal is requested within the 30-day period, the Executive Director will issue LIHI Certification for the facility and post a notification of certification on the Institute’s website.  Once final, the effective certification date for the Dog River Project is October 14, 2016 for a five (5) year term, which will expire on October 14, 2021.

January 6, 2017: LIHI has received a comment letter from the Vermont Department of Environmental Conservation in regards to the Dog River application for LIHI certification. The letter can be found in the Files section below.

January 3, 2017: LIHI has received a comment letter from the MadDog Chapter of Vermont Trout Unlimmited (MDTU) in regards to the Dog River application for LIHI certification. The letter can be found in the Files section below.

LIHI is seeking public comment on this application. Specifically, we are interested in knowing whether you think the Dog River project meets the LIHI Low Impact Certification Criteria. The Dog River application is subject to review using the Criteria in the LIHI Certification Handbook of 2014.  Please review the program and criteria in LIHI’s 2014 Handbook and then review the Project’s 2016 application materials posted on the project page. Comments that are directly tied to specific LIHI criteria (flows, water quality, fish passage, etc.) will be most helpful, but all comments will be considered. Comments may be submitted to the Institute by e-mail at comments@lowimpacthydro.org with “Dog River Project Comments” in the subject line, or by mail addressed to the Low Impact Hydropower Institute, PO Box 194, Harrington Park, New Jersey 07640. The 60 day public comment period begins on November 7, 2016.  Comments must be received at the Institute on or before 5 pm Eastern time on January 6, 2017 to be considered. All comments will be posted to the web site and the applicant will have an opportunity to respond.  Any response will also be posted.

The Dog River comment period has been extended to January 8, 2017.